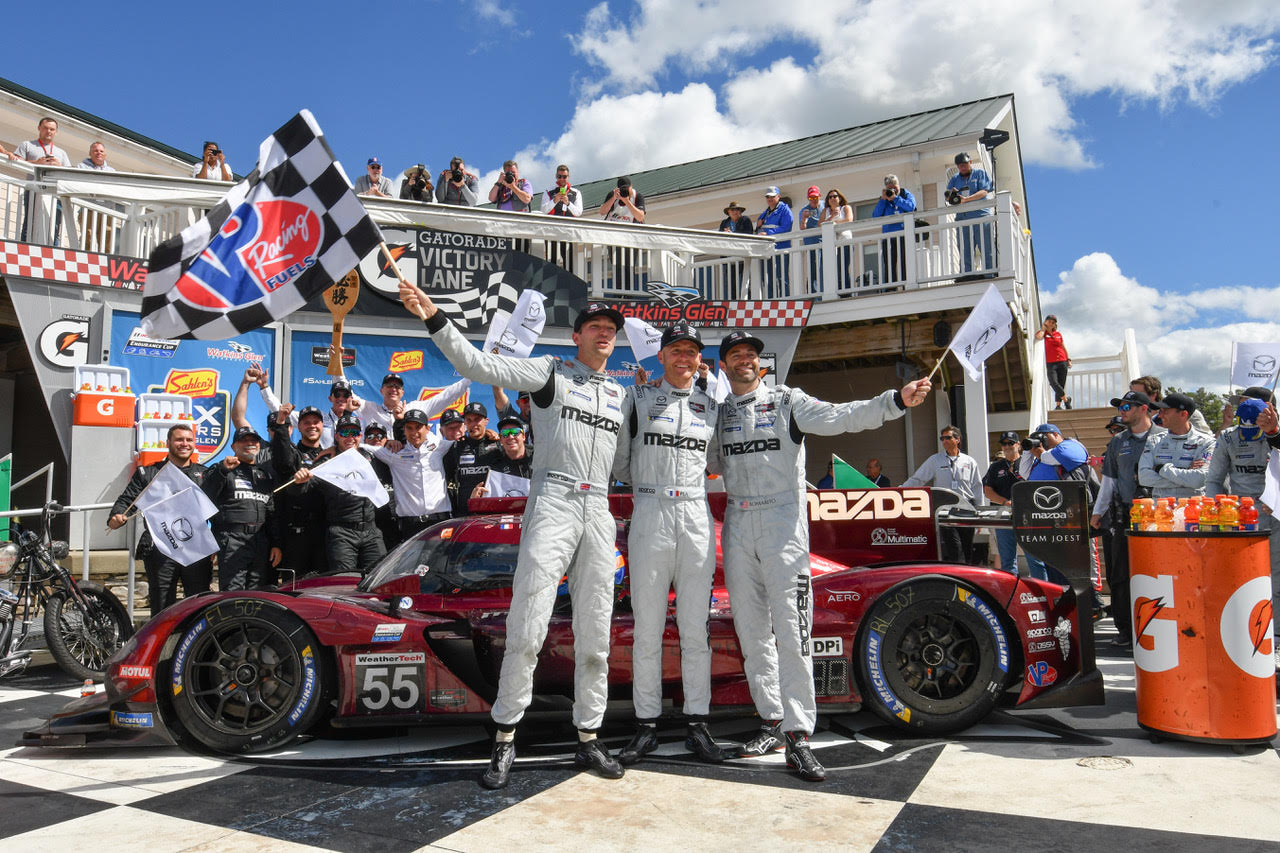 Mazda Team Joest has won its first Daytona Prototype international race in the IMSA WeatherTech Sportscar Championship, with a dominating run that saw the Soul Red Crystal Mazda RT24-Ps finish first and second at the Sahlen’s Six Hours Of The Glen.

The number 77 Mazda RT24-P started the race at Watkins Glen International from pole position after British star Oliver Jarvis set a new course record for the DPi class in Saturday’s qualifying session. Jarvis led from the start, and both the 77 Mazda RT24-P driven by Jarvis, Timo Bernhard and Tristan Nunez, as well as the number 55 Mazda RT24-P driven by Harry Tincknell, Jonathan Bomarito and Olivier Pla led throughout the first five hours of the race.

However, a safety car period in the final hour negated their advantage and put the Mazdas in second and third position behind the Accura of Team Penske. Tincknell, driving the 55 Mazda RT24-P for the final two stints of the race, executed a pass for the lead in turn eight and immediately built a several-second gap. At the final round of pit stops, Mazda Team Joest was able to maintain Tincknell’s advantage and complete Jarvis’ service in time to jump him ahead of the Penske into second place.

When the checkered flag waved at the end of six hours of racing, Tincknell led Jarvis across the line by 0.353-second. Olivier Pla also recorded the fastest lap of the race, with a time of 1.29.657. The two Mazda RT24-Ps combined to lead 183 of 211 laps of this famous North American race track.

“It’s been an amazing journey. We’ve been close but we never gave up – that’s the Mazda philosophy, to never stop challenging. The goal was to put it on the top step for the fans, the people who drive Mazdas, the people that race Mazdas, the people who sell them and for all of the corporate staff in Japan, the United States, Europe and the rest of the world. This is the day we’ve been waiting for. We really felt that today could be our day, so we would focus on racing the other cars and not each other. But in that last half-hour, you listen to every click on the radio worried that something would come. To see that Soul Red Crystal Mazda RT24-P cross the finish line makes this such a special day. This is a group victory for the Mazda brand, and the people as well. I couldn’t be happier.”

“I guess it was just meant to happy this way, to be first and second for the first victory, with both Mazda RT24-Ps deserving of the win. I’ve been with Mazda for so long, through so many of the ups and downs. So much perseverance has gone into this, from the people at Mazda, to the team, to our engineering staff and the drivers. It’s such a special moment and I’m so glad to be a part of it. Today was just about execution because we knew we had fast race cars, we just had to be perfect, and I think we were. This Is the best moment of my career, because of all the people, time and energy that has gone into this program. The sense of accomplishment feels great but I’m already thinking about next weekend – lets go get two in a row!”

“I’m so happy to get this first win for the team, and with these two guys. We were flying all year, and at each race we knew we had the pace to do it. Today was our day. The Mazda RT24-P was fantastic. I had a blast during my stint – I could push really hard and we finished the job. It was a really good day.”

“I want to make the most of this opportunity every single time and I didn’t feel as though I did that yesterday, but we rectified that straight away by taking third place by the first corner and leading the race in the second hour. But it was such a team effort today to have both Mazda RT24-Ps lead the race. The six drivers worked together so well, and we’ve improved so much as we push each other. The pit stops were perfect, and the car was perfect. For the Mazda Team Joest boys and girls, who have put more than two years into this, we are so grateful for their efforts and so happy to bring the car to Victory Lane. This win is for all the Mazda fans, the employees, the dealers and all the supporters all over the world. I have said all along that the first win will open the door to more and I hope that’s the case.”

“This one Is for Mazda and everyone involved with Mazda Team Joest. I just joined the team for the endurance races, but I know the hard time they’ve had leading up to this. We felt all along that it didn’t matter which car won, it would be for the program. The car was very good, the crew was very good, and I think the drivers were awesome! It all went to plan and this was a very satisfying day for everyone involved. You could see some tears from the mechanics, engineers, and management people so you know the pressure that was involved. It was a tough race, and even though we had pace on the field, you never know what can happen when overtaking cars and with cars on different strategies. But I really enjoyed my double stint, the Mazda RT24-P was very good, and I’m so happy for the team.”

“This one is massive. I’d have loved for it to be the No. 77 Mazda RT24-P, but it’s so important that we get this win. Congrats to everyone on the No. 55 Mazda RT24-P and to everyone Involved In this program – Mazda, Team Joest, Multimatic and AER. There are a lot of partners that have waited a long time for this, but we’ve got it. It’s a special day for us and we can all be proud of this, and now we need to go do this on a regular basis! We really had pace today – I’m surprised how much pace we had on the competition but then the Penske guys got in there and made things interesting. But it was good fun and that’s what I came here to do, to race with the best. To come away second sometimes feels disappointing but here, we can enjoy the moment for the other guys and the entire team.”

“I’ve been trying to practice what I was going to say In this moment. The hard work that went Into this, all we’ve been through, it all shows today. We’ve done countless hours of sim work, all the drivers have trained so hard and the entire crew has worked hard to get the driver changes and pit stops perfect. It was a perfect race. We said at the beginning that it didn’t matter which Mazda RT24-P got that first win, we’d be happy no matter which one got it. I’m so happy for these guys and for this team – nothing can beat this feeling. I’m so happy for John Doonan. He’s been flying all over the world trying to make this project work and we’ve finally got it.”