The Mazda Suitcase Car: Portable personal mobility with a twist 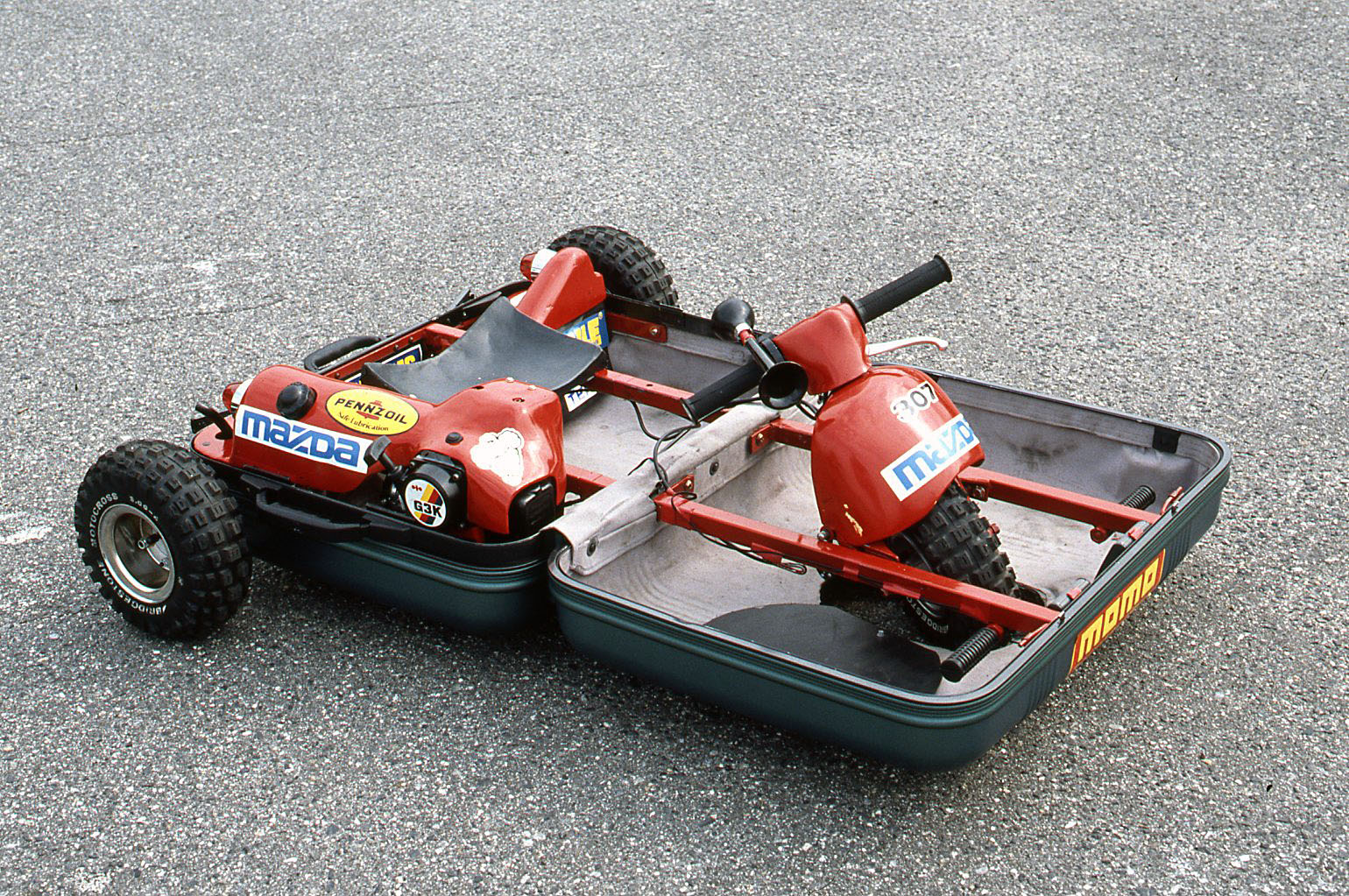 Mazda made headlines in the early 1990s with its “suitcase car”: A look back at a genuinely unconventional creation.

The dawn of the 1990s: It was a pivotal time in history. Optimism was in the air with the end of the Cold War. Scientists had just invented the World Wide Web. Technology was going to makes us more productive and bring the world closer together. Anything seemed possible.

It was an exciting time at Mazda, too. Overwhelmed with the demand for its then-new MX-5 roadster, the plucky carmaker would become in 1991 the first Japanese brand to win the 24 Hours of Le Mans and the only one with a rotary-engined car. The same year, it presented a hydrogen-powered rotary concept called the Mazda HR-X.

The prevailing atmosphere of confidence at headquarters in Hiroshima bred things like Fantasyard, an in-house competition held between 1989 and 1991 in which teams from different departments vied to come up with the best creative mobility ideas. Unimaginable in the gruelling global automobile market of 2020 and its ever-tighter budget constraints, Fantasyard aptly reflected the positive vibe three decades ago at a company long known for its unconventional approach. One edition of the contest would yield a particularly clever if somewhat bizarre winner.

Namely the “suitcase car”, a three-wheeled concept supposedly inspired by a vision of getting around airports more efficiently. Its creators, a group of seven engineers from Mazda’s manual transmission testing and research unit, received a small budget to bring their vision to life. After purchasing a pocket bike and the largest hard-shell suitcase they could find, they got to work.

The result was simple yet ingenious, with bits of the pocket bike including its 34cm3 two-stroke engine built into a 57cm x 75cm Samsonite. It took only a minute to assemble: Swivel the front wheel into the “upright” position through a removable section of the case, insert the rear wheels, attach the seat above the rear axle, and off you went. The 1.7PS powerplant could propel the contraption to speeds of up to 30km/h.

The suitcase car projected its Mazda DNA in several ways. Not only was it fun to drive with a low centre of gravity, akin to the MX-5, it also channelled the inventive spirit of the company‘s first production vehicle, the Mazda-Go, a popular three-wheeled motor rickshaw initially launched back in 1931.

At 32kg, however, the suitcase car wasn’t exactly practical, at least from a baggage perspective. But although mass production was never under consideration, the “portable” trike would get extensive media coverage, serving Mazda as a rolling advertisement. The resonance prompted the carmaker to build two more of them for the US and Europe, with the latter exhibited at the 1991 Frankfurt International Motor Show alongside the Le Mans-winning Mazda 787B. Only the US model still exists, with the original “accidentally destroyed” and the European replica having disappeared under unknown circumstances.

Mazda’s 100-year history features a broad spread of some of the most unexpected and unusual vehicles that tell a story of the engineering ingenuity and convention defying spirit that runs through the business.