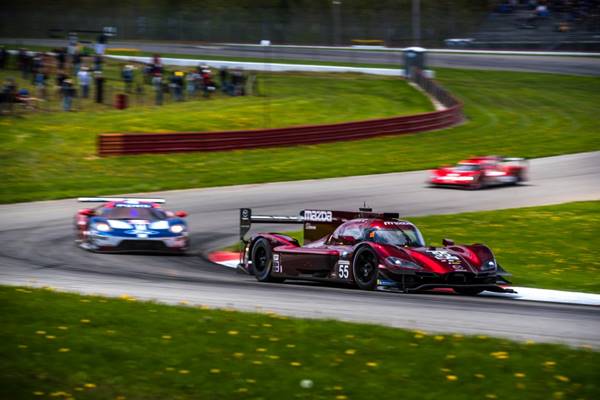 On the back of a strong race at the Mid-Ohio Sports Car Course, where Mazda Team Joest captured pole position before finishing in second and third place in the fourth round of the IMSA WeatherTech SportsCar Championship, the team’s drivers are looking for a slightly better result this weekend.

This weekend’s Sports Car Classic, held on the temporary circuit on Belle Isle in Detroit, Michigan is the second temporary circuit that the Daytona Prototype international class will race on this season. At the Sports Car Grand Prix of Long Beach, Oliver Jarvis and Tristan Nunez led laps in the No. 77 Mazda RT24-P before finishing in fourth position.

Mazda captured a podium at Detroit in 2017 in the Daytona Prototype international class, and a Mazda6 driven by Nunez won the GX class at Belle Isle in 2013. Nunez and Jarvis sprayed champagne for the second time in two years at Mid-Ohio, finishing in second position in the No. 77 Mazda RT24-P, while Jonathan Bomarito and Ryan Hunter-Reay, who subbed for Harry Tincknell, finished in third position in the No. 55 Mazda RT24-P. Tincknell returns to Mazda Team Joest this weekend.

“Given how we have performed at each of the events so far in 2019, we are entering each weekend with the confidence that the Mazda RT24-P is capable of being quick, running up front and threatening for the win. For several years, the temporary circuits have not been our best opportunity for success but candidly, the IMSA BoP formula and process has given every entrant the chance to be in the game. With solid execution, we will be in the hunt at Belle Isle. Huge thanks to everyone at Multimatic, AER, Motegi Racing and Mazda Team Joest. When success does come, those who have given so much effort will reap the satisfaction and all of our Mazda fans, dealers, racers and employees will be rewarded with what they deserve.”

“Coming off a double podium at Mid-Ohio, and since we had two very fast Mazda RT24-Ps at the last street course at Long Beach, I am very excited for Belle Isle this weekend. It’s a complex street course that requires tons of commitment from the driver, which is challenging. We will be pushing extremely hard for that first win for Mazda.”

“I am really excited to be back in the No. 55 Mazda RT24-P after missing Mid-Ohio. Mazda Team Joest did such a fantastic job there with a double podium and I’m sure that form will continue at Detroit. Last season, we were fast in testing but didn’t get the end result, but I feel like having the track experience will really help me this year. The team is on a high and we go into the weekend with a lot of confidence.”

“After just missing out on the win at Mid-Ohio, we head to Detroit fully motivated to build on our recent strong performances and results. Last year we ran strongly in the race, and with the hard work and preparation that has gone in over the winter, we will be in an even better position this year in our No. 77 Mazda RT24-P.”

Tristan Nunez
“Belle Isle has always been a track that surprises us. Every year, we never expect to be as competitive but in recent years we’ve had great results for Mazda. I’m looking forward to seeing what’s in store for Olly and I in the No. 77 Mazda RT24-P this weekend, and with the momentum from Mid-Ohio I’m even more excited.”