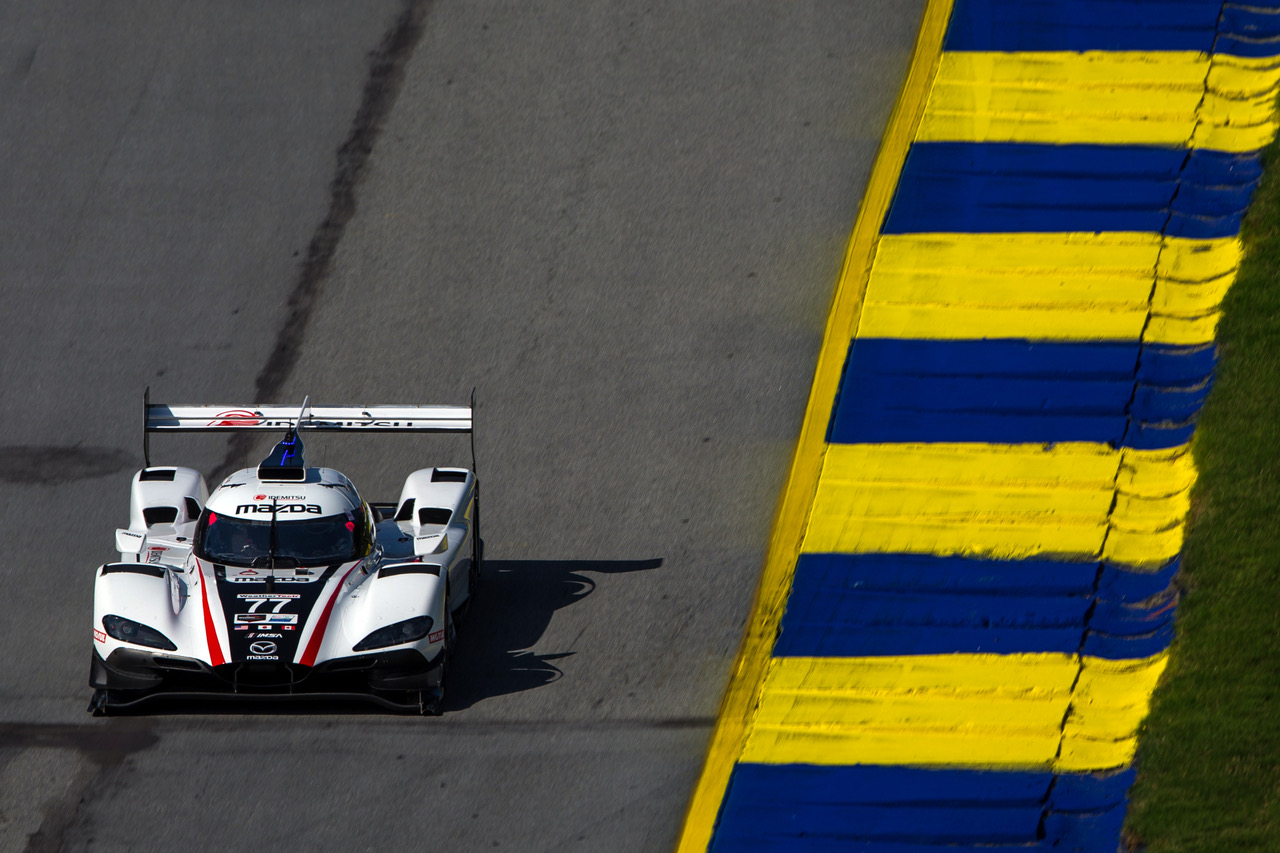 The IMSA Sportscar six-hour enduro at Road Atlanta provided enough excitement and drama to last an entire season.  With nothing to choose between any manufacturer, in any class across the field.  The exceptional parity ultimately resulted in a flat-out, six-hour sprint race where flawless execution by both drivers and crew offered the only possible chance of success.

Ultimately the number 55 Mazda of Harry Tincknell, Jonathan Bomarito and Ryan Hunter-Reay stayed in the mix and finished a scant 0.9 seconds behind the winner.  Critically the 55 crew finished ahead of all their championship rivals and now sit fourth just six points behind the leader with four races to go.

“I actually hurt my neck a few days ago,” he continued. “It was just one of those things when you kink it and it really locks up. Quite a few people got involved to help me – Tristan (Nunez) even gave me a little massage during the race to loosen it up – but it was a struggle in the car and I think it was adrenaline that got me through it, especially once I got Castroneves in my sights in the closing laps.”

With positions constantly changing, the penultimate pit stop was crucial for the number 55. Hunter-Reay was running fifth and the team called it early to give him a clear in-lap and Tincknell a traffic-free out-lap.  The time gained by the strategy allowed the Mazda to jump two cars in the pit sequence and be up to speed to easily pass Montoya on track.  Tincknell then began to rapidly run down the leading Penske of Helio Castroneves but a full course yellow, with just 13 minutes to go, put paid to the attack leaving only two green laps, not quite enough to finish the job. The number 55 Mazda crossed the line less than a second behind number 7 Penske after six hours of flat-out racing.

For the number 77 of Oliver Jarvis, Tristan Nunez and Olivier Pla, a brake fluid leak ended what had the potential of being the car’s first win of the season. Some cars just look fast and at Road Atlanta the #77 Mazda was one of those, setting a blistering pace from the green flag. Starting from the back of the DPi field, due to a penalty invoked by an overnight engine change, didn’t stop Nunez from getting in amongst the leading pack from the start. Like the sister car, the number 55 yo-yoed up and down the leader board, but storming drives from all three pilots proved that the number 77 was fully in contention for the race win, Pla ultimately setting the fastest lap of the race in his first event since the Rolex 24. With two hours remaining, Nunez took the lead and built a significant gap to P2 after 30 minutes of consistently being the fastest car on-track.  But he was forced to pit when braking performance became erratic and the telemetry indicated that the bias was unstable and that fluid had been lost. The team quickly diagnosed that a line had failed but there was no margin for any such issue and it ended the chase for the Mazda. They re-joined and finished seventh in class.
“Of course we are disappointed that we couldn’t fight for the win but what a race!” said Pla. “Thank you to the crew for giving us such a fast car today. It was a lot of fun out there. Hopefully our time will come soon.”

Despite this setback, the number 77 Mazda crew sits fifth in the championship, just nine points adrift from the lead so the 2020 title is still there for the taking.