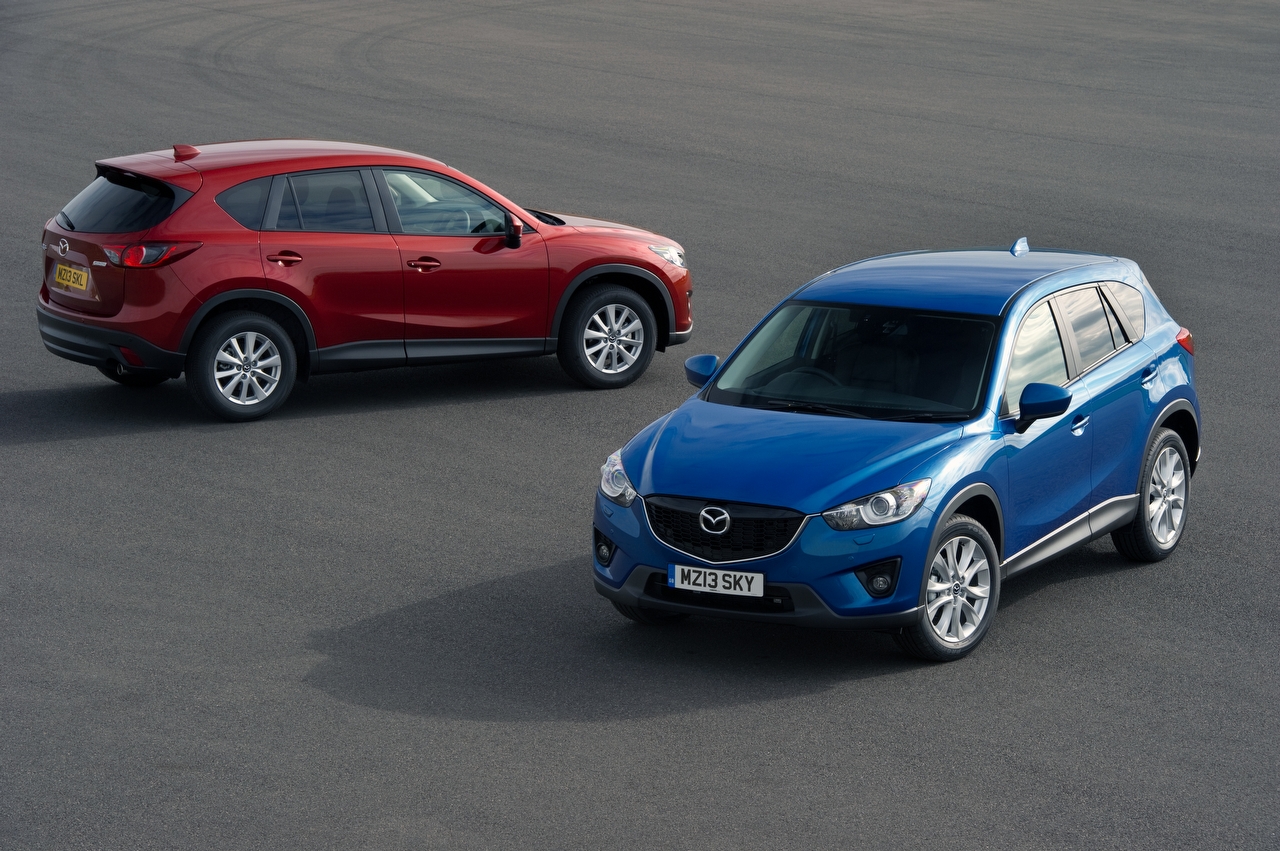 Today Mazda is famed for creating a range of great to drive and attractively designed cars and SUVs, known for their quality, style, technology and dynamic ability. In recent years Mazda has reacted to the huge desire for SUV style vehicles with a host of new models, ensured each of them features Mazda’s trademark driver engagement, so that a Mazda SUV always puts the sporty in Sport Utility Vehicle.

Yet, it’s only been in the last 15 years of Mazda’s history that the huge consumer phenomenon that is the modern SUV has really kicked in, so we take a look back through Mazda’s past from the earliest flirtations with rugged 4×4 vehicles and off-roaders, to the rise of the modern SUV, to chart Mazda’s story in this now crucial sector of the global car market.

Like most car manufacturers Mazda’s first 4×4 vehicles were far more utilitarian in nature and very much all-wheel drive workhorses. This was certainly the case with an odd global anomaly in Mazda’s history: the Mazda Pathfinder XV-1. A rugged off-roader in the ilk of the original Toyota Land Cruiser and Land Rover, the Pathfinder was designed in Hiroshima but was exclusively assembled and sold in Burma between 1970 and 1973. Popular with the military and police, it was powered by a 90ps engine and was offered with either a canvas roof or as enclosed nine-seat version, largely unknown in the rest of the world, a few can still be seen on the roads of Myanmar today.

From the 1960s onwards Mazda production of pick-ups grew throughout the next two decades, and the next vehicle that could be considered to be in the SUV lineage was developed from the 4th generation B-Series pick-up. Launched in 1991, the Mazda Proceed Marvie was a boxy off-roader utilising the B-Series’ underpinnings. Featuring, three rows of seats it was only produced in right-hand drive and sold in Japan and Asian markets, while in Australia in was sold as the Ford Raider.

Given the American love affair with off-roader type vehicles, it’s no surprise that Mazda also launched a 4×4 vehicle for the US market in 1991. The Mazda Navajo was fundamentally a rebranded Ford Explorer Sport and was built in Kentucky. Sold exclusively in the United States, it was a two-door, four-wheel drive SUV and was distinguished from its Ford sibling by a unique grille, plus different wheels and headlamps. Powered by a 4.0-litre V6 petrol engine with a choice of four-speed automatic or five-speed manual gearbox, it established the idea of an SUV in Mazda’s American dealers before production stopped in 1994.

A similar OEM supply deal also saw a rebranded Suzuki Escudo sold as the Mazda Proceed Levante in Japan in the late 1990s, but as the 21st century arrived, Mazda launched its first serious SUV: the Mazda Tribute. Jointly developed with then shareholder Ford, the Tribute was based on the Mazda 626 platform and formed the basis for the Ford Escape or Maverick as it was called in Europe.

Both cars made their public debut in 2000, with the Tribute revealed at that years Los Angeles Motor Show. With US market Tributes produced alongside the Ford Escape in Missouri, the Tribute was also manufactured in Hiroshima. With a sportier and firmer suspension set up than the Ford, the Tribute was Mazda’s first SUV in the UK and it arrived here in 2001 with a choice of 123bhp 2.0-litre petrol or a 196bhp 3.0-litre V6 petrol. The smaller and more popular 2.0-litre was matched to both front and all-wheel drive transmission. In 2002 Mazda UK sold 881 Tribute’s accounting for 3 per cent of UK sales, but the Tribute was discontinued in the UK at the end of 2004.

However, in the US and other global markets, a revised second-generation Tribute was launched in 2007, but by then Mazda was already fully embracing the explosion of SUV sales in North America with the launch of the first-generation CX-9 in 2007. A sporty looking SUV with a swept roofline, prominent wheel arches and a bold grille it shared some mechanical parts with Ford models, but unlike Mazda’s previous OEM partner based offerings into the world of SUVs, this was arguably the first real independent Mazda SUV and a car that expressed Mazda’s style and focus on driving dynamics.

At more than five meters long, the seven-seat CX-9 was a large American SUV powered by V6 petrol engines and was never intended for sale in Europe. But by 2007 an equally stunning Mazda SUV had arrived in the UK, based on the MX-Crossport concept car that was revealed at the 2006 LA Motor Show, the Mazda CX-7 was unlike any all-wheel drive vehicle to have worn a Mazda badge before. Like the CX-9 it was designed by Moray Callum, and this was an SUV that could attract customers on style alone.

Offered with front and all-wheel drive it was powered by a 256bhp 2.3-litre Mazda MZR turbo-charged petrol engine, and was praised for its sharp car-like handling and slick gearbox. The lack of a diesel engine when diesel was rising in popularity in Europe initially limited sales in the UK, but in 2009 a 2.2-litre 170bhp diesel was offered, yet by 2010 the CX-7 still only accounted for a modest 1.9 per cent of Mazda’s UK sales. However, the launch of the next SUV was about to change all that, as it arrived just in time to capitalise on the boom in sporty off-roaders.

A groundbreaking car for Mazda, the CX-5 was the first car to feature Skyactiv Technology and the first to feature Kodo design. The first of a new generation of Mazdas, the 2012 CX-5 featured all of Mazda’s latest engine, chassis and transmission technology, plus a huge step forward in cabin quality and overall desirability. Praised by media and customers alike it was powered by 2.2-litre Skyactiv-D diesel and 2.0-litre Skyactiv-G petrol engines with both all and front wheel drive versions. A truly global model it was named 2012 Japan Car of the Year and became a crucially timed success story for Mazda in all key markets. And as a mark of its popularity in the UK, by 2013 CX-5 sales in the represented 19 per cent of total sales. Substantial updates in 2014 kept the CX-5 at the top its game, before the second-generation was revealed at the 2016 Los Angeles Motor Show

A car that has continually evolved to offer ever improving refinement, interior quality, equipment and technology, the CX-5 continues to be a hugely popular family SUV and the recently updated 2020 Mazda CX-5 is a linchpin of Mazda UK’s current line-up.

As consumer demand for SUVs spread to a wider range of different sized vehicles, the CX-5 was joined by the smaller Mazda CX-3 in 2015, sharing its platform with the Mazda2, the CX-3’s sporty styling, premium feel and sharp handling set it apart from many crossover rivals. Offered with a choice of front and all-wheel drive it was available with both diesel and petrol engines. Thanks to this broader SUV range, in 2017 combined CX-5 and CX-3 sales accounted for 27 per cent of Mazda’s UK sales volume.

The CX-3 was a sales success around the world and remains a key model in Mazda’s global SUV production, which includes several cars we don’t sell here in the UK. The second-generation CX-9 was launched in 2016 and delivered new levels of refinement, equipment and premium quality to Mazda’s flagship SUV in the Middle East, Australasia, Russia and North America, where in the United States alone sales topped 26,000 cars in 2019.

Other global SUV products include the Mazda CX-8, a longer seven-seat version of the CX-5 that’s Mazda’s largest SUV in Japan where the CX-9 is not sold. Launched in 2017, dealers in Japan received 12,000 orders in the first few weeks on sale, where the CX-8’s combination of family practicality, quality and Kodo design, built on the popularity of the CX-5 in its domestic market to become a big sales success. Also sold in Australia, New Zealand, South East Asia and China it’s powered by either normally aspirated or turbocharged 2.5-litre petrol engines, and in some markets the 2.2-litre Skyactiv-D found in European CX-5s. Produced and sold exclusively in China, the Mazda CX-4 is a coupe inspired SUV with a sweeping roofline, launched in 2017 it’s another example of Mazda’s ability to produce vehicles tailored to localised SUV demands alongside their core global models.

And the latest of those core models is the Mazda CX-30. Launched in 2019, it slots into a new SUV segment for Mazda, and following the Mazda3 is the second model in the company’s next generation line-up and the second to feature the ground-breaking Skyactiv-X spark-controlled compression ignition engine. Combining the bold stance of an SUV with the sleek profile of a coupe, the CX-30s cabin, technology and quality sets new standards for a Mazda SUV. And as an idea of the importance of SUV in today’s market, combined CX-5 and CX-30 sales accounted for 45.5 per cent of all Mazda UK sales in 2019.

As Mazda heads into its second century, a range of stylish, great to drive, high-quality and ever more efficient SUVs will continue to play an enormous part in Mazda’s future, especially as from early next year, the all-new Mazda MX-30 SUV inspired crossover EV arrives in the UK to start a whole new chapter in Mazda’s SUV story.