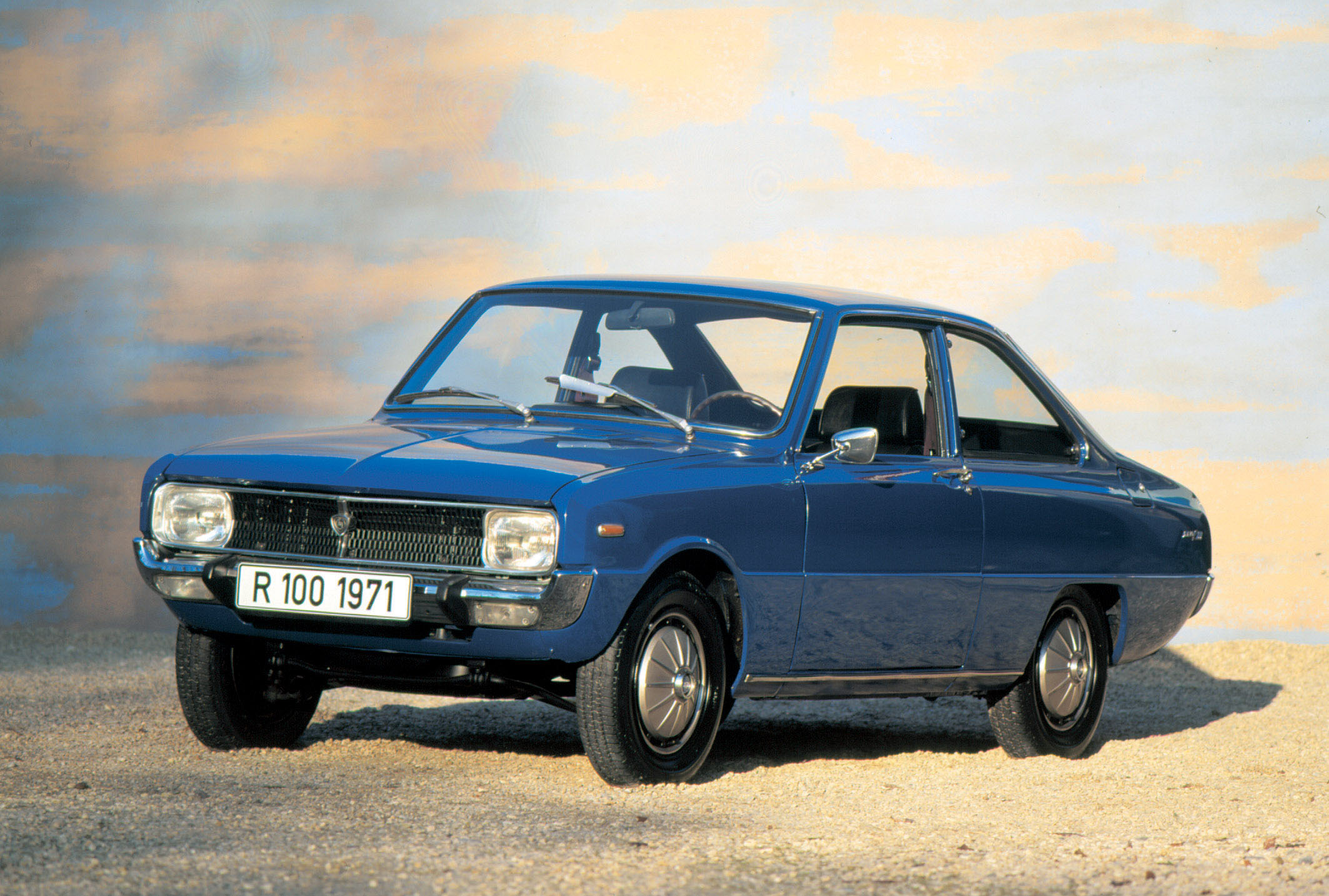 Mazda Motor Corporation started life 100 years ago on the 30th January 1920, as the Toyo Cork Kogyo Company producing cork for gaskets, insulation and cushioning material.  It was not until 1931 that the first vehicle rolled off the production line, the Mazda-Go three-wheel truck and it was another 29 years until Mazda produced its first passenger car, the R360 coupe in 1960.  A company with global ambitions, exports to Europe started just seven years later.

Sales in the UK started on a small scale in 1967 with just nine cars being imported in two years through Normand Garages, part of the Lyons food chain, with Industria (London) Ltd taking over the import of Mazda and officially launching the Mazda marque on the 30th September, 1969 at the British motorshow.  However, it was not until 1972 when three Volkswagon GB executives departed the German manufacturer and took over Industria (London) Ltd, changed the name to Mazda Car Imports (GB) Ltd, that the sales started to rise.

Mazda was a relatively unknown brand in the UK in 1969 and early sales reflected the relative anonymous nature of the marque with a few hundred cars sold a year.  By the end of 1973 sales were at 7,000 a year but were limited in the mid-1970s by the Voluntary Export Restriction agreement with JAMA (Japanese Automotive Manufacturer’s Association) that sales of all imported Japanese cars in the UK would not exceed 11% of the total automotive sales.

Over the last fifty years more than 30 different Mazda nameplates have been imported into the UK, here we look at the most significant of those. In the year that man walked on the moon and the Boeing 747 entered service, the Mazda R100 coupe was launched into the UK market, powered by a 100hp twin rotor engine it was ‘as modern as men on the moon’ and priced at £1,649.  The Mazda R100 was joined by the Mazda 1200 saloon at £879, the Mazda 1800 saloon, retail price £1,189, known as the Mazda Luce elsewhere, and the Mazda 1200 estate for £949.

Alongside the RX-2 was the smaller Mazda RX-3, sold as a two-door coupe and five door estate it was powered by the twin rotor 982cc 10A rotary engine.  Production started in 1971 and ran through to 1978, with the car sold in the UK until 1975.  The RX-3 was also sold as the Mazda 818, the differentiator was the power unit, which was a conventional four-cylinder engine with three capacities of 1272cc, 1490cc and 1586cc and externally the RX-3 was differentiated from its piston engined sibling by a nose panel with dual round headlights and a more prominent and pointed honeycomb grille.

The 1970s had seen change in the UK, it had been an era of economic struggle and technological innovation, Concorde had entered service, the micro-processor had been invented and email was emerging on the ARPANET. By the end of the decade imports started of the car that took the rotary to the masses – the Mazda RX-7.

The Mazda RX-7 was a striking 2+2 with pop-up headlights, and a height of only 125.9 cm and was powered by a new generation of more economical Wankel motors with low emissions, and greater reliability. The twin-rotor unit was front-mounted and drove the rear wheels through a five-speed gearbox. With a low, sporting wedge-like design and a top speed of 115 mph, the Mazda RX-7 found fans in the UK wanting a car that would challenge the performance from the ubiquitous German and Italian sports car manufacturers.

As the 1980s dawned the naming of Mazda models had changed to create more recognisable family nameplates with UK customers driving the Mazda 323, Mazda 626, Mazda 929. This decade saw extraordinary cultural and technological change, the space shuttle took flight, the Berlin Wall fell, and Live Aid raised millions for the world’s starving.  The decade saw a continuation of Mazda’s naming strategy and in 1988 the Mazda 121 joined the model line up in the UK, a car that shared many of its components with the Ford Festiva. Mazda was gaining fans, not just for the reliability, affordability and the outstanding drive experience, but also for the success on the track as Win Percy won the British Touring Car Championship in 1980 and 1981 in the Mazda RX-7.

However, it was the end of the decade that Mazda introduced its most famous car at the Chicago motor show, although the British public would have to wait until the next decade to experience the delight of an affordable, lightweight two seat sportscar. The 1990s continued with great technological and cultural change, the internet became widely available, Nelson Mandela was elected the President of South Africa, the American space shuttle docked for the first time with the Russian Mir space station and JK Rowling published the first Harry Potter book.

In 1990 the MX-5 arrived, instantly finding favour with the British motorist, a lightweight, affordable sportscar, very much in the vein of British sport cars of the 60s and 70s.  It redefined the segment and, thirty years on, the MX-5 is still going strong, winning awards and plaudits for its driver focused set up, despite its modest power, and has become a firm favourite in the UK with over 12% of all global sales finding a home here.

The new Mazda 121 was launched in 1991.  A more rounded shape with a full-length canvas roof made this a popular car with those who wanted wind in the hair motoring with the practicality of four seats. Then came the Mazda MX-3, a small 2+2 coupe powered by either a 1.6-litre four-cylinder engine or a super smooth 1.8 V6, one of the smallest V6s commercially available, this car was designed to offer an outstanding driving experience with great handling.

In early 1992 the MX-3 was joined by the MX-6 coupe, powered by a 2.5-litre V6 engine driving the front wheels, it could easily match any of the hot hatches or performance cars of the time.  A silky-smooth engine, flowing design and a driving experience that was very Mazda, made this a popular choice for those who wanted something different.

Later in 1992 the Mazda Xedos 6 joined the UK model line-up, available as either a 1.6-litre petrol engine or a 2.0-litre V6, it was aimed very much at the premium end of the market and the design was described by many commentators of the time as the best-looking car on the road, some comparing it to Jaguar design.  Mazda UK went on to campaign an Xedos6 in the British Touring Car Championship, affectionately known as the ‘Mr Blobby’ car due to its yellow and purple colour scheme, it was driven by Patrick Watts, David Lesley and Matt Neal.

Completing a bumper crop that year for new Mazda cars as the third generation RX-7 was next to arrive.  Powered by the 13B twin rotor, sequential turbo, the RX-7 offered supercar looks and performance to match, this car was the ultimate Mazda driving machine.  The sequential turbos provided 10psi of boost from 1,800rpm, with the second turbo kicking in at 4,500rpm providing semi-linear acceleration throughout the rev range.  To aid driver engine management a buzzer sounded at peak revs to encourage a gear change, pop up headlights gave the car a streamlined low CD when the lights were retracted and an interior that cocooned and supported the driver offered the ideal seating position in this exciting car.  The RX-7 went on to feature in many films, most memorably The Fast and The Furious, and became a firm favourite of rotary fans the world over.

Then in 1993 the Mazda Xedos 9 arrived, the bigger brother of the Xedos 6, it was powered by a 2.25-litre V6 Miller Cycle engine and was focused on attracting premium buyers to the marque.  The cabin boasted luxurious leather seats as standard, keyless entry, heated front seats and traction control all as standard. These cars were joined at the end of the decade by the Mazda Demio, Premacy and MPV, with the Mazda 323, 626, B-Series pick-up and E-series panel van completing the line-up.  Creating a diverse and interesting product offering from the small Japanese manufacturer which was fast becoming renowned for building cars that deviated from the conventional and were great to drive.

As we headed into a new century Mazda UK launched the Mazda Tribute, which was Mazda’s first original SUV having spotted the growing market trend for SUVs. As the new century developed, so did the Mazda offering in the UK, no longer restricted by the JAMA agreement, and now a national sales company, there was opportunity to grow market share.  The Mazda 626 was replaced by the Mazda6, the Mazda3 replaced the 323 and the Mazda2 replaced the 121 and Demio.

A new rotary contender was launched in 2003, the Mazda RX-8, with its butterfly doors and lively twin rotor RENESIS engine, this was joined by a new MX-5 in 2005 along with the Mazda5 which replaced the Mazda Premacy.  The Mazda MPS badge (Mazda Performance Series) adorned the back of the Mazda6 and Mazda3 in 2006, offering subtle performance versions of these popular cars.  In 2007 the Tribute was replaced by the Mazda CX-7 which was in turn replaced by the CX-5 in 2012 as engines and design saw a significant change in direction.

Skyactiv technology reiterated Mazda’s ability to think differently with more efficient and economical engines, and Kodo design led to some of the best-looking cars on the road.  A new Mazda6 followed the CX-5, the Mazda3 was replaced and a CX-3 joined the SUV line-up in 2015 followed by an updated Mazda2.

In 2015 the fourth generation Mazda MX-5 was launched, returning to its roots as a fun to drive, affordable, lightweight sports car, this was followed by the MX-5 RF in 2017 with its retractable metal roof.  The Mazda6 was significantly upgraded in 2018  and in 2019 the long awaited Mazda3 with the Skyactiv-X Spark Controlled Compression ignition petrol engine made its debut with the evolution of Kodo design.  The CX-30 joined the SUV range at the end of 2019, fitting in between the CX-3 and CX-5, powered by the revolutionary Skyactiv-X engine.

As we move into the next decade, Mazda will introduce its first EV, the Mazda MX-30, in 2021 to be followed by models with greater electrification, cleaner and more efficient internal combustion engines, a great driving experience and a design philosophy that produces cars with outstanding kerb appeal.