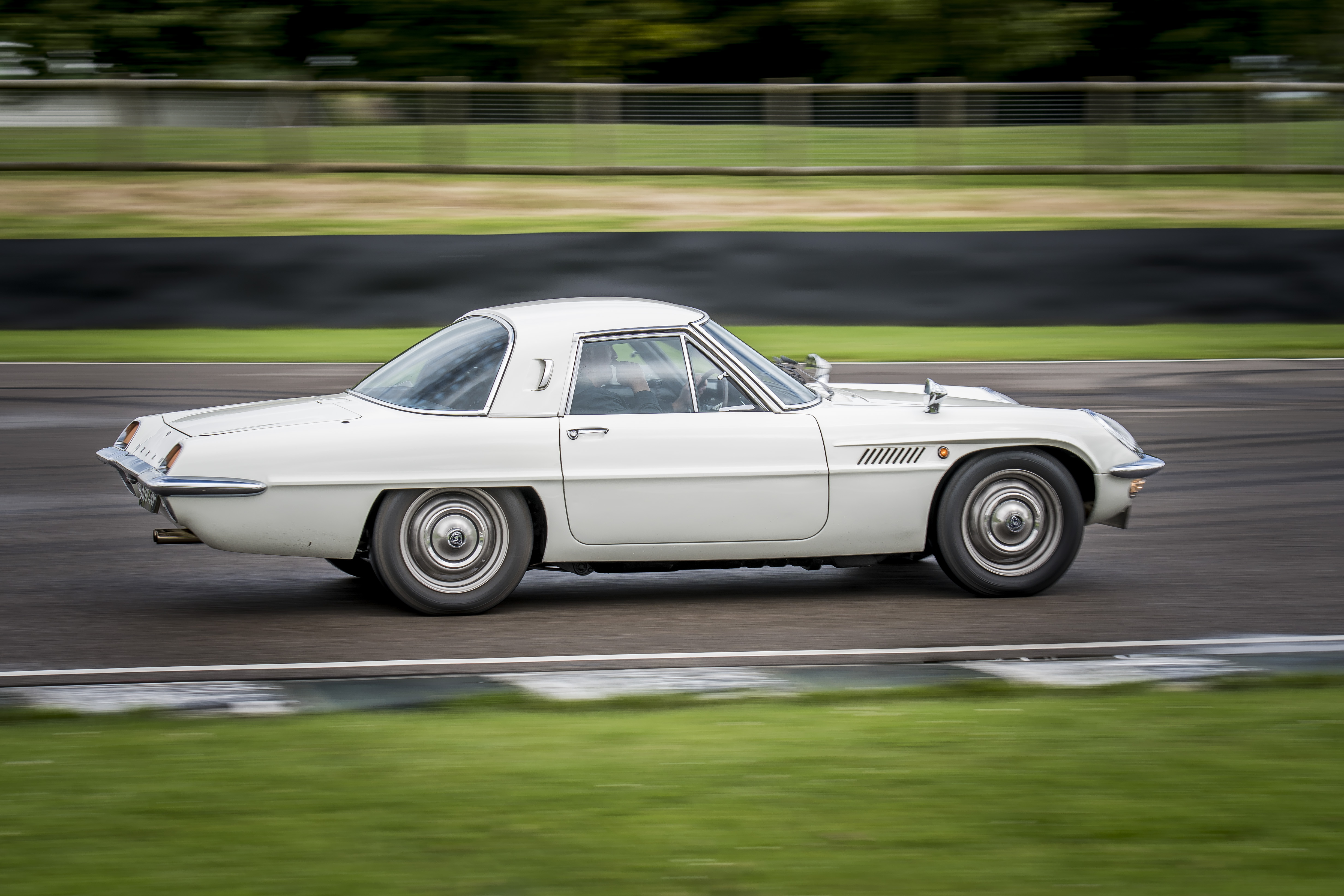 What’s it like owning a rare Mazda Cosmo sports coupe? We ask Phil Blake, a till installation engineer from Suffolk, who owns two Cosmos ‑ half the cars in the UK.

“I’m a rotary engine nut. When I was a kid doing a paper round, I used to deliver to a house that had three NSU Ro80s parked outside it. They looked really cool and then I found out what a rotary engine was and that was it. I bought my first Ro80 when I was 16 and now have 15 of them in various states of repair. Because of the unusual engine I found out about the Cosmo and as the first ever rotary production car that was like the Holy Grail. 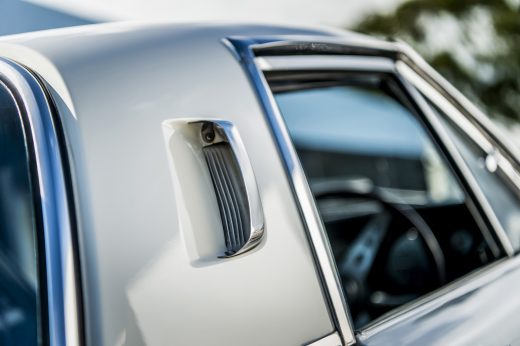 I bought my first Cosmo in the late 1980s but it’s a real basket case. It’s rusty beyond belief. When the Cosmo was built, it was hand made so I don’t think treatments for rust proofing were high on the agenda; it was pretty much a mobile test bed for the engine after all. That first Cosmo still doesn’t run and when this 1968 model came up for auction at Beaulieu in 2000, I borrowed the money from my brother and bought it. 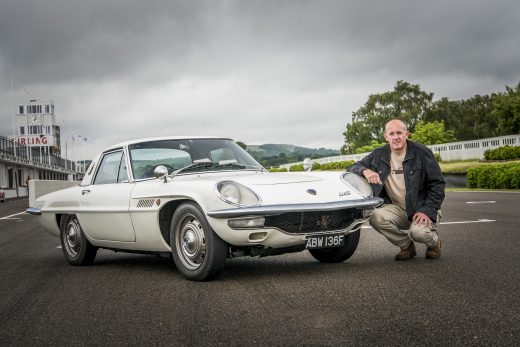 The previous owner was Ivan Dutton who specialises in Bugatti restoration. He had bought the Cosmo in 1989 and then spent around 10 years getting it back on the road. It was originally a Mazda Spain press car and when Ivan got hold of it, the Cosmo wasn’t working so he had a bit of a job on his hands. 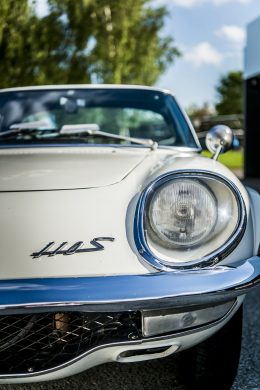 This model is a Series I but it’s got a Series II front on it and it’s badged as a 110S rather than a Cosmo. It’s great having such a rare car; no one ever knows what it is: “Is it a Lotus?” “No. It’s an Alfa Romeo.” It’s always fun watching the surprise on people’s faces when I tell them it’s a Mazda. 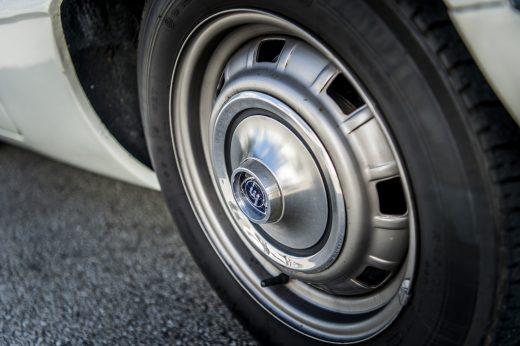 The Cosmo was never sold outside Japan. The only cars that made it to Europe were those that came over for evaluation so finding spares can be a bit tricky. My restoration model is missing a lot of parts, which is why it’s still a basket case! The car I drive has been pretty reliable. I’ve taken it on some long trips to Germany and Austria. And when you do need parts some are available from Mazda and you can frequently find them on Japanese auction sites but they can be very pricey. It needed some new track rod ends recently so I hunted them down and bought them from Japan. They arrived in Isuzu packaging and they fitted perfectly so I could probably have got them an awful lot cheaper. You live and learn! 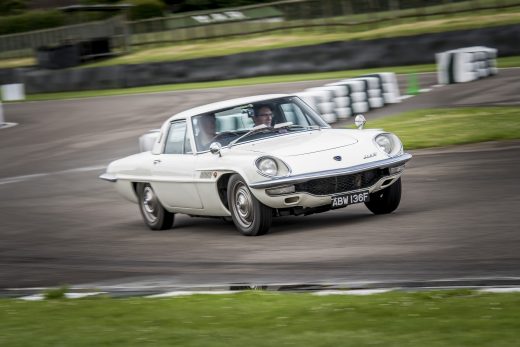 If it’s ever crashed, I’ll have to have parts made and there are things that I would struggle to find but fingers crossed so far I haven’t had to do much to it. I’ve had the clutch rebuilt, and replaced the brakes, reversing lights and track rod ends and that’s about it. The Cosmo is an easy car to work on. I service it myself and there’s plenty of room beneath the bonnet. If something drastic did happen to the engine, there’s nothing to say you couldn’t put an RX-7 engine in it as a last resort.

When Ivan Dutton bought the car, it had a cracked windscreen. He bought a replacement and they cracked that putting it in. When they replaced that, they clearly didn’t want to put it under too much pressure so the screen leaks water a bit around the edges. Apart from that – and banging my head on the roof because I’m quite tall and it’s so low ‑ there are no problems. It hums along happily and it’s fantastic fun to drive, more than capable of keeping pace with modern traffic. 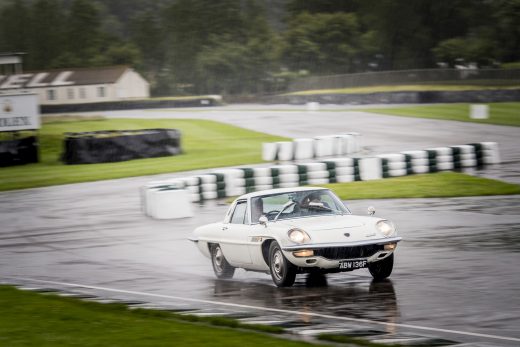 How much is it worth? I’m not sure but prices have started to go ballistic. It’s viewed in a similar way to the Toyota 2000GT: a Cosmo sold in the US not so long ago for $250,000! But I’m not planning on selling mine any time soon.”

What is the Mazda Cosmo? 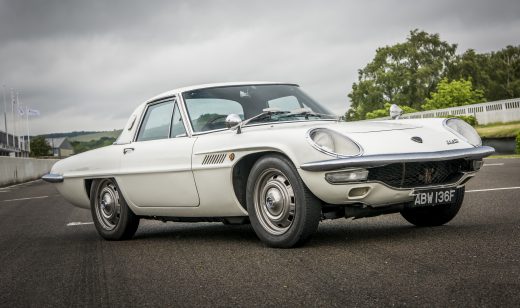 The two-door Mazda Cosmo sports coupe became the first ever mass produced car to be powered by a rotary engine. It was first unveiled at the Tokyo Motor Show in October 1963. It went on sale in May 1967 featuring a 491cc x 2 rotor engine that developed 110hp (hence the 110S name). Top speed is 116mph and the engine revs to 9500rpm. A Series II model was built from July 1968 featuring a five-speed gearbox, a power hike to 128hp and an increased wheelbase to improve ride comfort. Around one model per day was built until 1972. A total of 1519 Cosmos were produced. Mazda UK owns one of the four cars in the UK. It is currently undergoing restoration.