Mazda at 100 | the Mazdas that worked for a living 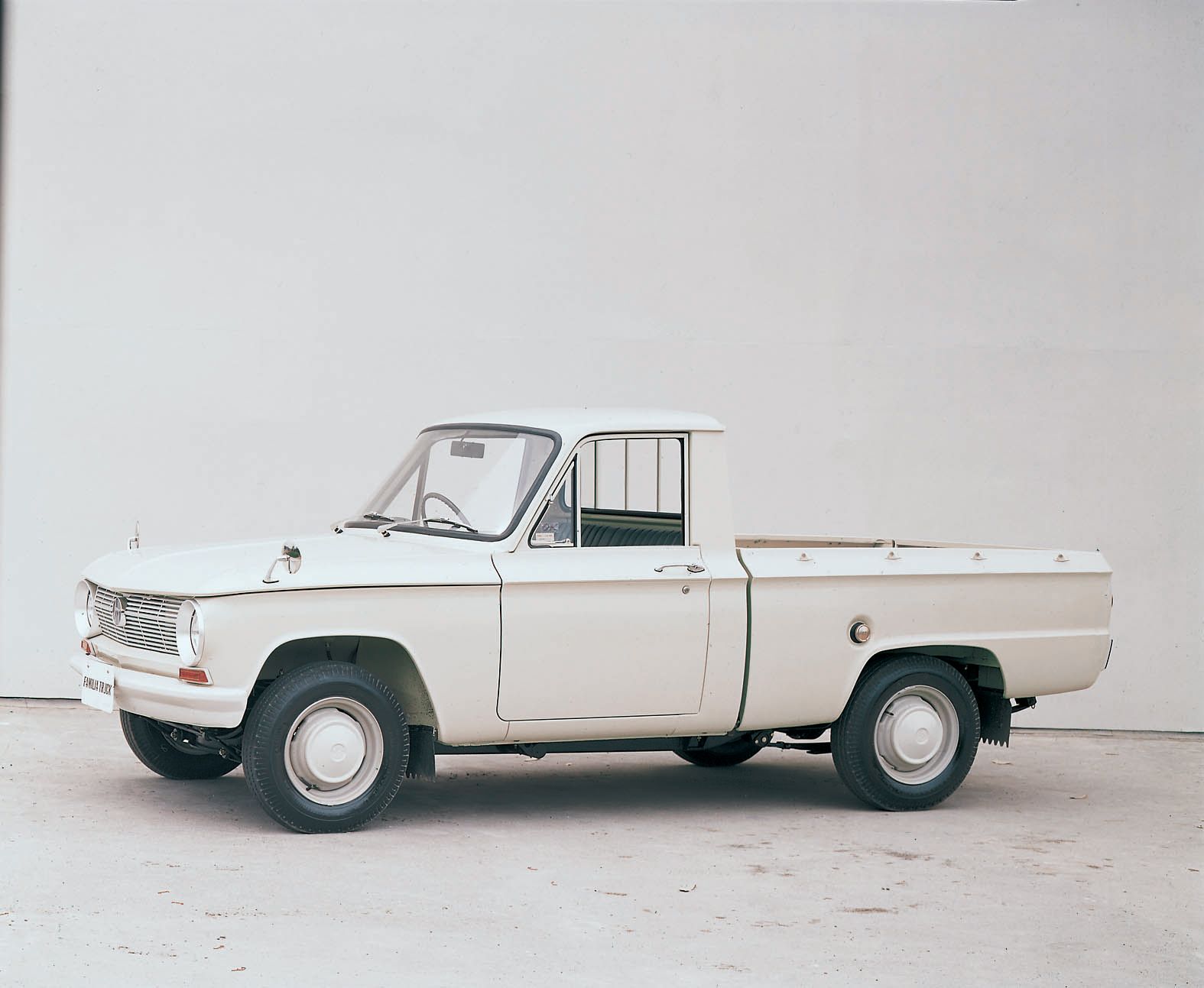 Today Mazda is famed for creating a range of great to drive and attractively designed cars and SUVs, known for their quality, style, technology and dynamic ability. Yet, Mazda’s roots include slightly more humble origins, and across the company’s 100-year history there’s a long list of purposeful vehicles that were built to work for a living. Sharing the same focus on clever engineering, durability and convention defying solutions as today’s modern Mazda cars, from trikes to pick-ups, vans to trucks and buses to campers, Mazda’s history is filled with a wide spread of interesting vehicles that carried, delivered and transported across the generations.

In fact, the first product to wear the Mazda moniker was exactly this kind of vehicle: a three-wheeled open truck called the Mazda Go. The first motorised vehicle ever produced by the Toyo Kogyo company, as Mazda was then called, it already embodied the characteristics of the company’s approach to automotive innovation, as unlike lots of rivals, it had a ground-breaking rear differential and a reverse gear. Introduced in October 1931, the Mazda-Go Type-DA was equipped with an in-house developed air-cooled one-cylinder 482cc engine producing 9.4ps, a sales success it was designed for a life of hard graft in the hands of Japan’s farmers and small businesses.

This first version was followed by more powerful DB, DC and KC variants, before the Go gave rise to all manner of other practical three-wheeled Mazda models that dutifully served working Japanese customers. Even better for them, the next generation of practical Mazdas encased the driver rather than leaving them exposed to the weather. The spiritual successor to the Mazda Go was the 1959 Mazda K360, like its predecessor it was a three-wheeler, but in other respects it was an altogether more sophisticated machine, and it was a resounding sales success with 280,000 sold over a 10-year production run.

It also contributed to the development of Mazda’s first car – the Mazda R360, but while the little R360 started Mazda’s 60yrs of car production – particularly in the Japanese domestic market, Mazda continued to produce commercial vehicles. Also launched in 1959, the Mazda T1100 was nicknamed the ‘sumo trike’, powered by a water cooled four-stroke engine paired with a four-speed gearbox that drove the rear wheels it could carry much bigger loads than the smaller K360. More powerful 1.5-litre T1500 and 2.0-litre T2000 versions followed in 1962 and 1965 respectively.

Mazda continued to produce these nimble yet practical three-wheeled utility vehicles into the 70s, however by then they had already launched a host of more conventional four-wheeled commercial vehicles, including in 1958 – the Romper truck, which helped to more than double Mazda’s share of the Japanese truck market from 4% to 10% in just 12 months.

The success of the Romper led onto its 1964 replacement the Mazda E2000 then the 1968 E2500, and from 1971 the Mazda Titan. Across six-generations the Mazda Titan has been a mainstay of the domestic Japanese small truck market and today’s Titan is an OEM supply share with Isuzu.

The early 60’s also saw Mazda launch its first pick-up models, another segment that globally Mazda has remained in to this day – with the Mazda BT-50 currently sold in Asia, Australia and some African markets. The first pick-up was the diminutive B360, which was sold from 1961 to 1968, while the ‘miniature truck’ looking Mazda Porter ‘cab-over-engine’ pick up was sold across two generations from 1970 to 1989. A modest and frugal micro truck, it used a two-stroke, two-cylinder engine that restricted performance to around 56mph, making it ideal for local deliveries.

However, the main lineage of Mazda’s traditional pick-up range was led by Mazda 1000 pick-up versions of the first and second-generation Familia, while from 1961 to 2006 across six-generations Mazda’s B Series pickups were offered in a myriad of specifications across many global markets. With the engine displacement used in the model name, across the decades production under licence of various models in countries as widespread as Iran, Columbia, South Africa, Philippines, Vietnam and New Zealand ensured Mazda pick-ups delivered global reach and sales success, with the B-Series also being a popular choice here in the UK. The later Mazda BT-50 pick-up was not sold in Japan but was sold in the UK until 2010.

Yet, it’s a Mazda pick-up that was only produced from 1974 to 1977 that gets enthusiasts excited –   the Rotary Pick-Up (REPU) is the world’s only rotary powered pick-up. Built for export to North American markets, beneath the bonnet was a 1.3-litre 13B rotary motor running through four carburetors, that meant it could rev to around 7000rpm, which was unheard of in a pickup truck. While owners of a modern Mazda can appreciate that each and every model is engineered to be fun to drive, 1970s American pick-up trucks were normally crude and basic, Mazda wanted to change that by giving a pick up the sort of technical ingredients usually found in sports cars and making them a hoot to drive. The result was the REPU, which is why today this rare Mazda is a sort after classic.

However, the REPU isn’t the only rotary powered rarity in Mazda’s vehicle history, as the lightness and small dimensions of the rotary was something that Mazda’s commercial vehicle engineers were just as keen to utilise as their car department colleagues. The result was the rotary Parkway bus, sold from 1974 to 1976 with 26 and 13 seat versions, its 120kph top speed made it one of the fastest coaches in the world at the time, while the smoothness of the rotary engine made for a tranquil passenger experience.

Vans also played a part in Mazda’s commercial vehicle story and the mainstay of this is a vehicle that arguably wears the most famous badge in the workhorse lineage – the Mazda Bongo. First launched in 1966 as a small-van with a rear-mounted 782cc 4-stroke engine, this generation also featured flat bed and mini-bus versions. Named after the African Bongo – a type of antelope, the Bongo continued over five generations to today’s model, which is an OEM supply model with the Toyota HiAce. Through the generations the Bongo featured rear, middle and front engine layouts and came with van, flat-bed, minibus and double-cab versions, with a long wheelbase variant called the Bongo Brawny. Known as the E-Series in some European export markets, in the 70s through to the 90s it was offered in the UK, while various licensing agreements and partnerships saw versions wear the badges of other brands in some markets.

But ask most people what the Mazda Bongo means to them and they’ll probably ignore the hard-working van versions and instead mention the Bongo Friendee, which was introduced in Japan in 1995. An eight-seat minivan, many had factory fitted kitchens installed and the camper van conversions allowed for a rising fabric roof to provide a top sleeping area. While never officially imported into the UK, the Bongo Friendee camper is a popular personal import.

While today Mazda continues to retail commercial Bongo and Titan models for the domestic Japanese market, unique work-horse based models like the REPU pick-up, Bongo Friendee camper, Porter Cab micro truck and rotary Parkway bus mean some of the names and badges in Mazda’s commercial vehicle history have won friends in markets where they were never officially sold.

And whether it was with the development of the Mazda Go at the company’s founding or the idea to utilise the lightness, smoothness and compact size of the rotary engine in a pick-up or a bus, Mazda’s engineers displayed the same defy convention engineering led ingenuity on commercial vehicles as they did on the car range. At the same time as developing cars like the Mazda Cosmo sports car, Mazda produced the E2000 truck, highlighting the breadth of its engineering and manufacturing abilities.

Today in Europe the modern Mazda brand may have moved a long way away from commercial vehicles, but the success of these humble Mazdas that worked for a living is a chapter in the Mazda success story, one that has seen the Mazda brand constantly evolve. With the forthcoming launch of the Mazda MX-30 EV, Mazda enters its second century with a move into a whole new segment for the brand.

Related tags: Mazda at 100, Mazdas that worked for a living