Six classic Mazdas that worked for a living 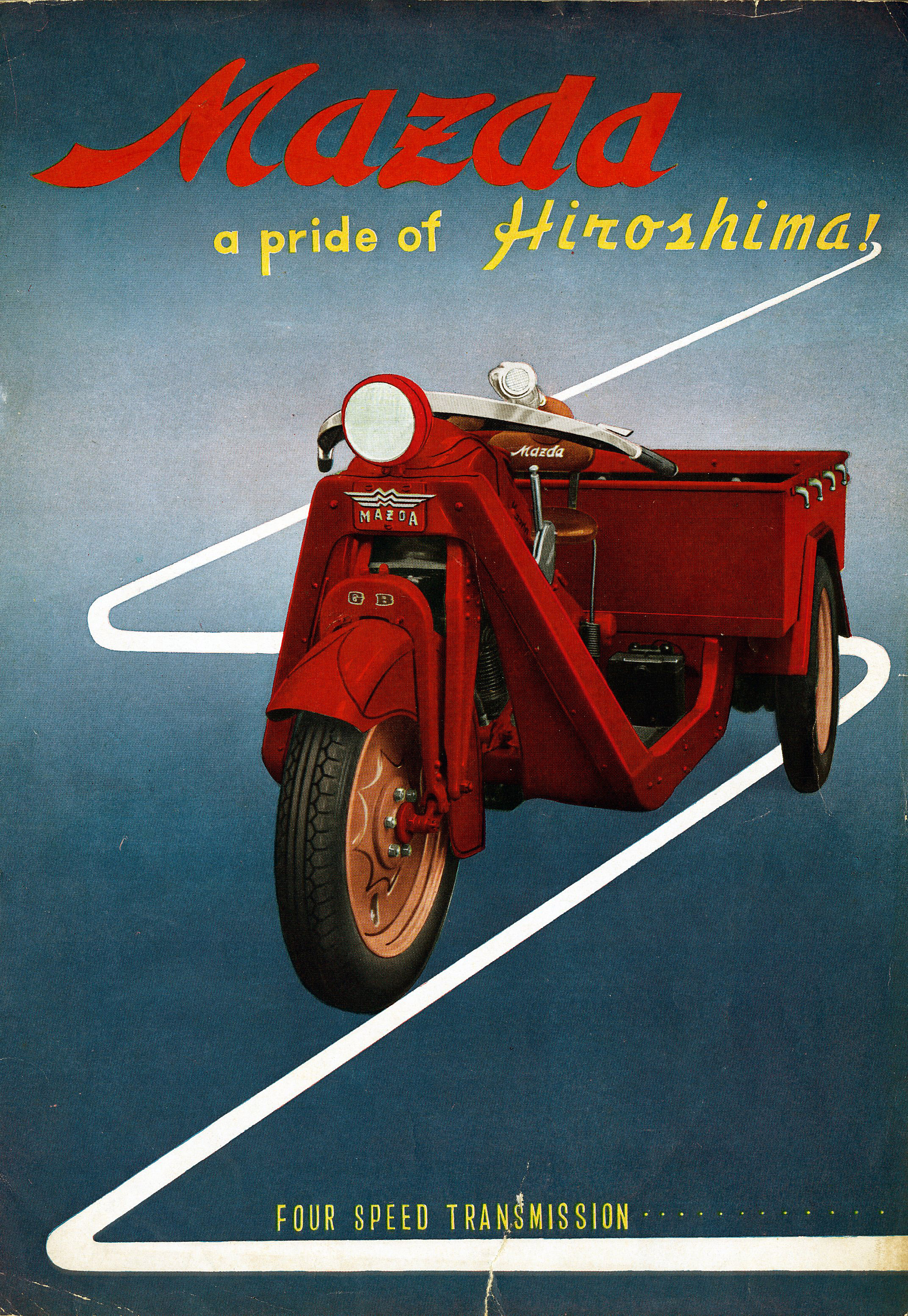 Mazda is famed for creating some of the world’s most exciting sports cars and today is well known for its range of stylish and good to drive cars and SUVs. Yet the company’s roots have slightly more humble origins. Mazda’s first vehicle was a prototype motorbike. This led to the development of the first production Mazda: the 1931 Mazda-Go, a three-wheeler that empowered Japan’s working classes. Here are some of the landmark work hard vehicles that helped build the Mazda legend. 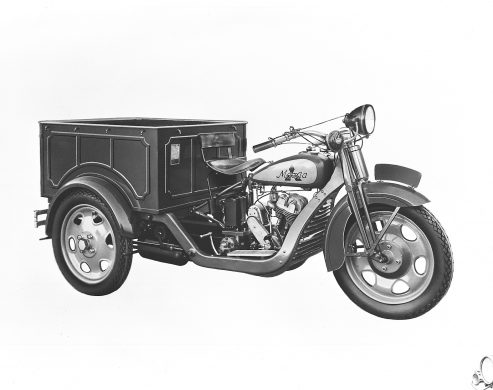 The first production vehicle built by Mazda (or Toyo Kogyo as it was first called) was the Mazda-Go. It was a three-wheeled motorbike, or auto-rickshaw, and was manufactured at the newly constructed Fuchu-cho factory in Hiroshima, on the former site of a salt farm.

The Mazda-Go was unashamedly a workhorse, designed for a life of hard graft in the hands of Japan’s farmers and small businesses. With three wheels it attracted less tax, making it more affordable for drivers.

It was steered with handlebars, had a single seat and came with a modest single-cylinder engine and a transmission with a reverse gear and differential – all manufactured by Mazda. 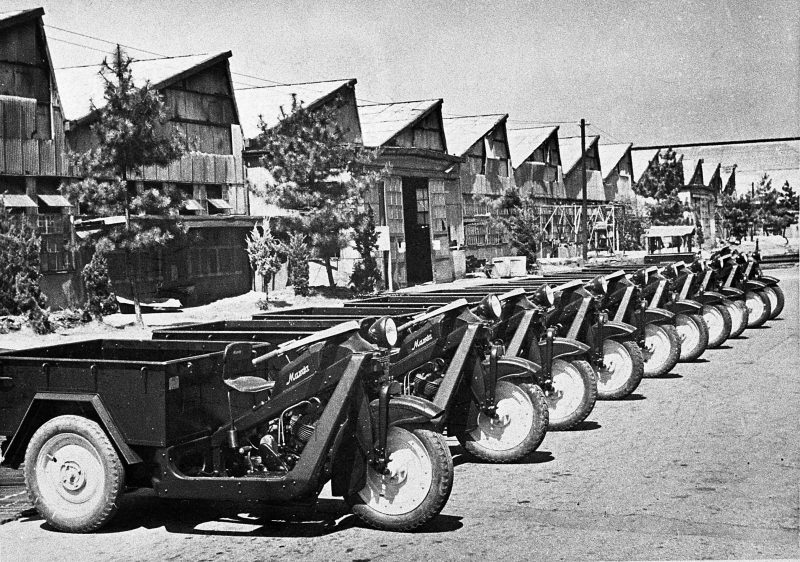 The Mazda-Go came complete with a flatbed cargo area, said to be class-leading for its time and type. It gave rise to all manner of other practical three-wheeled Mazda models that would dutifully serve the Japanese people in the pre- and post-war eras. But there was a snag. If it rained, you got wet, as there was no bodywork encasing the driver – something Mazda would address with its next generation of hard-working vehicles. 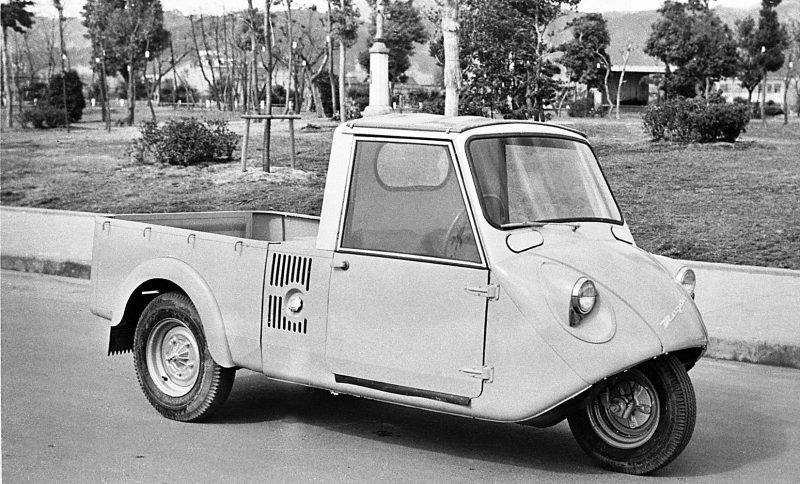 The spiritual successor to the Mazda-Go was the K360. Like the Mazda-Go, it was a three-wheeler with a motorbike engine. But in other respects this was an altogether more sophisticated machine.

While much of its physical growth could be attributed to an increase in payload, there were other practical considerations. Compared with the Mazda-Go, it was positively luxurious with an enclosed cabin for two people. 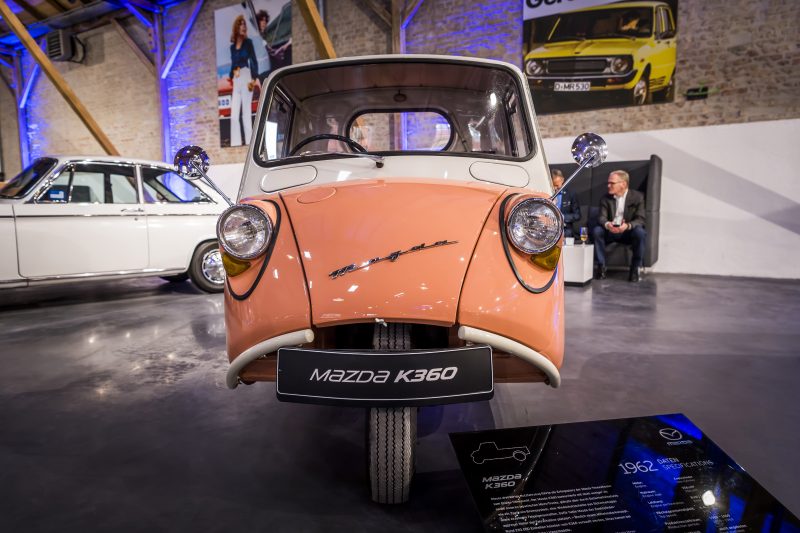 Beneath the load bed was a 356cc V-twin air-cooled engine. Because of its location, air inlets were placed in the bodywork behind the doors to feed the motor. 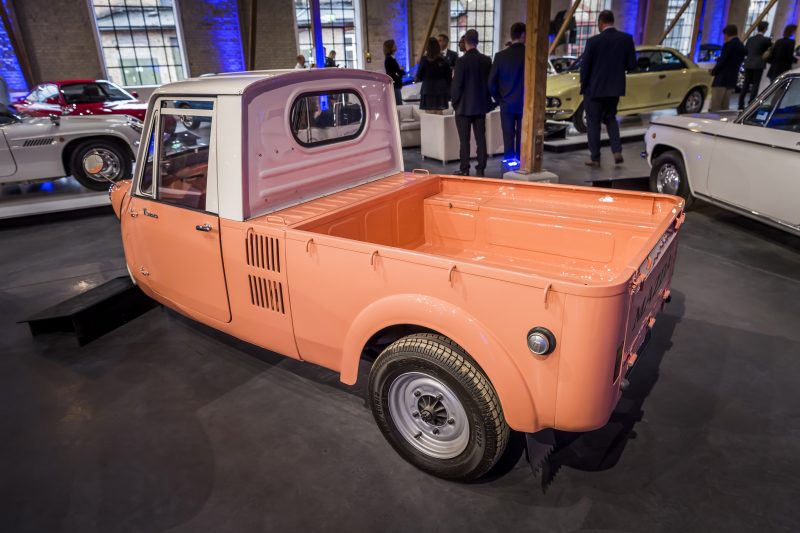 It would become a resounding sales success for Mazda, with nearly 300,000 K360s sold to Japan’s drivers over a 10-year production period. And much of the technical know-how learned from the K360 influenced the development of Mazda’s first passenger car, the R360, launched in 1960. 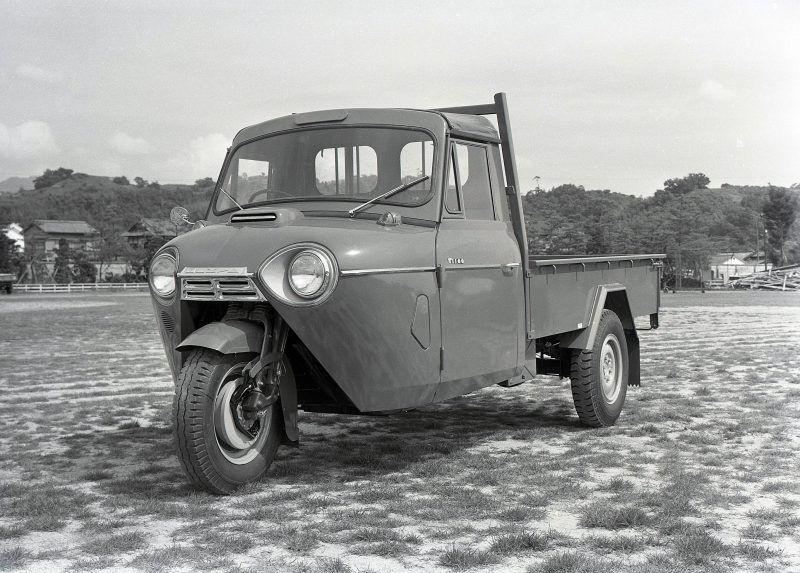 It was nicknamed the ‘sumo trike’ and one look at the Mazda KT1100 tells you why.

The three-wheeled workhorse had grown, expanding in size to meet the demands of commercial vehicle users and gaining more power under the bonnet to cope with the loads the T1100 was expected to haul. 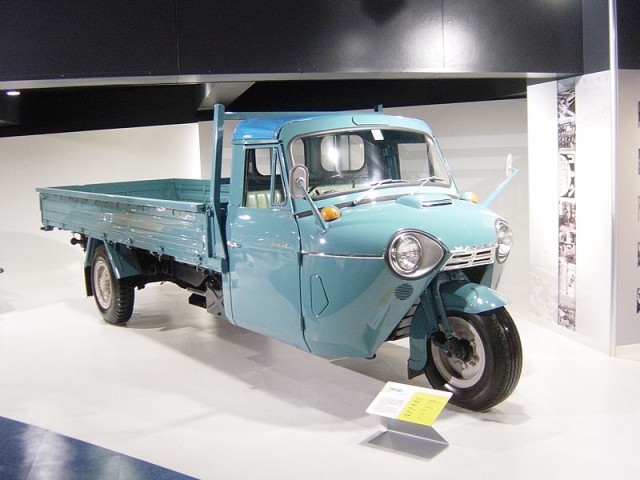 The T1100 –named after its engine capacity ‑ was one of the first Japanese trikes to use a car engine, in its case a water-cooled four-stroke, four-cylinder that was paired with a four-speed gearbox and drove the rear-wheels. More powerful 1.5-litre and 2-litre models followed in 1962 and 1965 respectively. 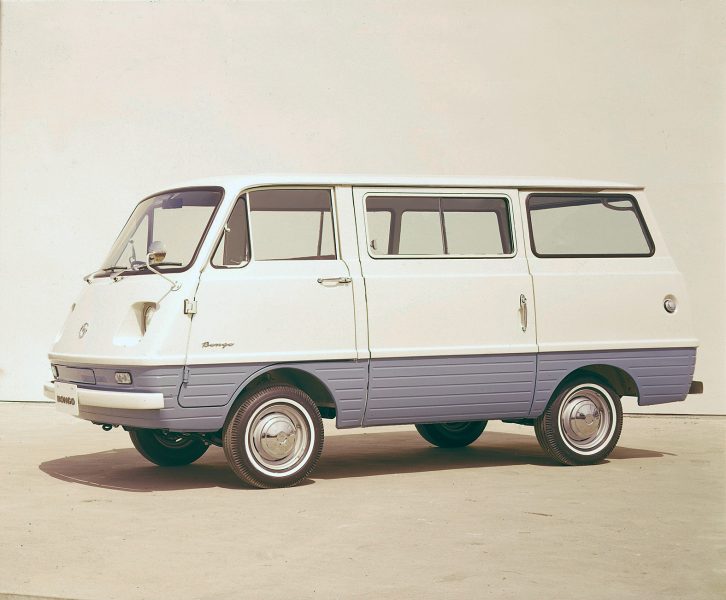 The advertising literature at the time of the Bongo’s introduction showed this versatile model being used for camping holidays, family outings and even tennis tournaments. It was Mazda’s most ‘lifestyle’ vehicle to date. It could even be ordered with a specially-designed awning that attached to the roof rails, sheltering a table, chairs and barbecue from the sun or rain.

Its engine was in the back of the Bongo’s rear-wheel drive chassis, with a choice of 782cc or later, 987cc four-cylinder motors. This allowed for flexibility to produce many varients including a flat-bed van. 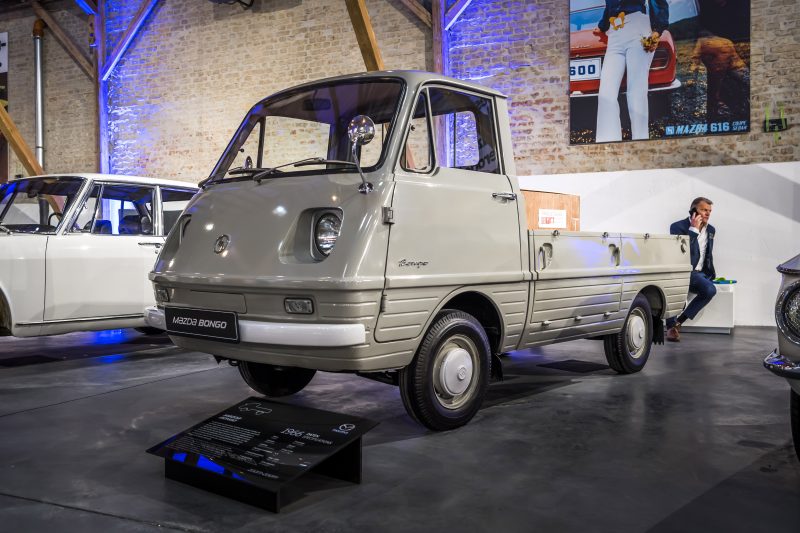 Commercial variations of the Bongo continue to be built by Mazda to this day, and highlights have included the Bongo Brawny and Bongo Friendee, names that have won friends even in markets where neither was officially sold. 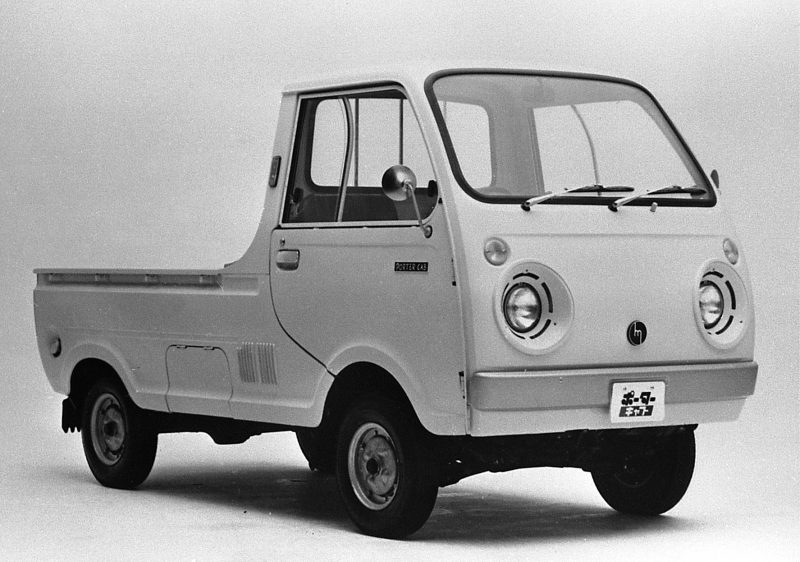 The Porter Cab’s cute face could have been created for Disney’s Cars movie franchise. But it was designed decades before Lightning McQueen made it onto the big screen.

This four-wheeled pick-up was launched in 1969 and embraced by Japanese drivers who fell for the distinctive facial features, created by placing vented cowling around the circular headlights. 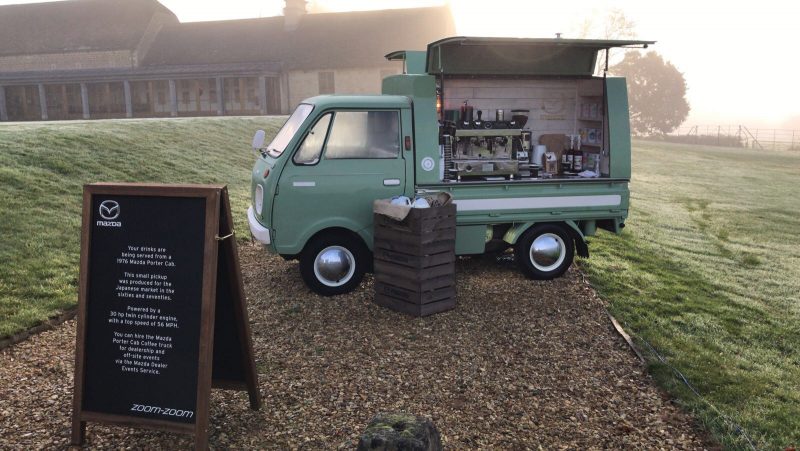 A modest and frugal pick-up truck, it used a two-stroke, two-cylinder engine that restricted performance to around 56mph, making it ideal for local deliveries. And today it’s even on the Mazda UK event fleet as the perfect coffee truck. 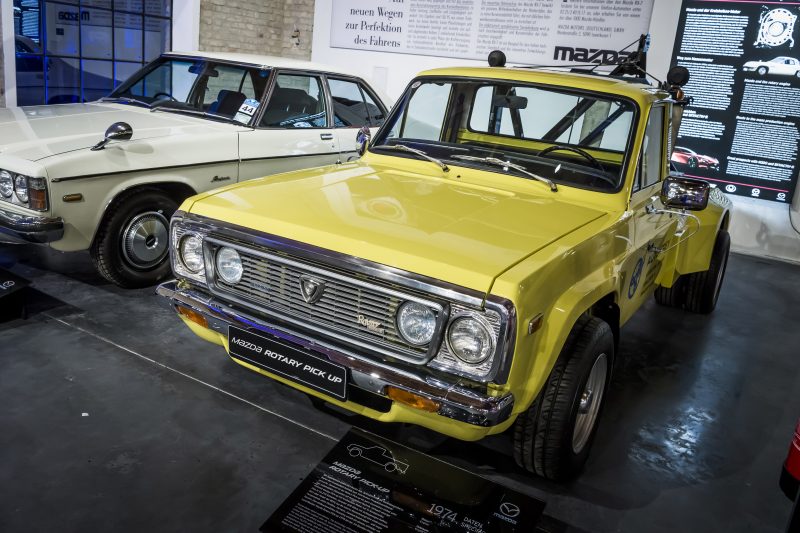 Today, owners of a modern Mazda can appreciate that each and every model is engineered to be fun to drive. But in the 1970s, things were a little different – especially if you drove a pickup truck in America.

Most were crude and basic. Mazda wanted to change that, by giving them the sort of technical ingredients usually found in sports cars and making them a hoot to drive. The result was the Mazda Rotary Engined Pickup or REPU. 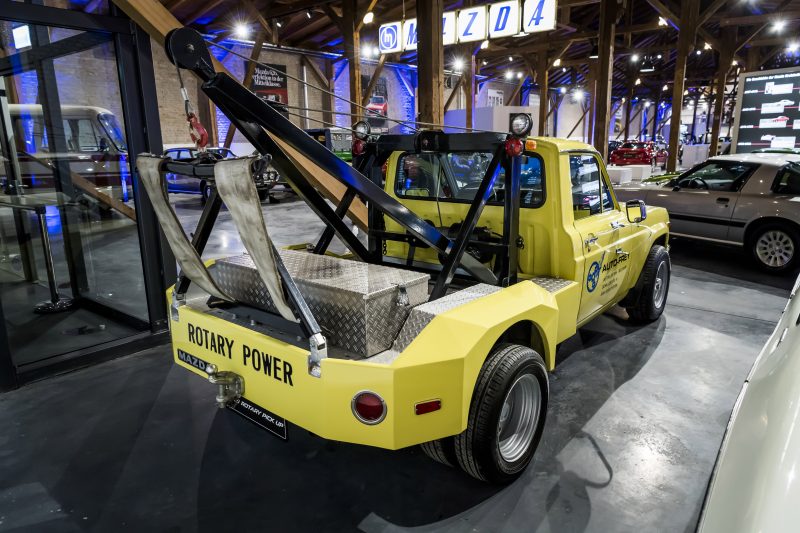 Beneath the bonnet was a 1.3-litre, four-port rotary motor running through four carburettors. It could rev to around 7000rpm, which was unheard of in a pickup truck. Motor Trend, an American car magazine, tested the Mazda Rotary Pickup in the 1970s and found it could accelerate from 0-60mph in just 8.9 seconds. This probably explains why owners drove everywhere with a smile on their face!

More Inside Mazda stories: How Mazda gets the classic British sports car into gear