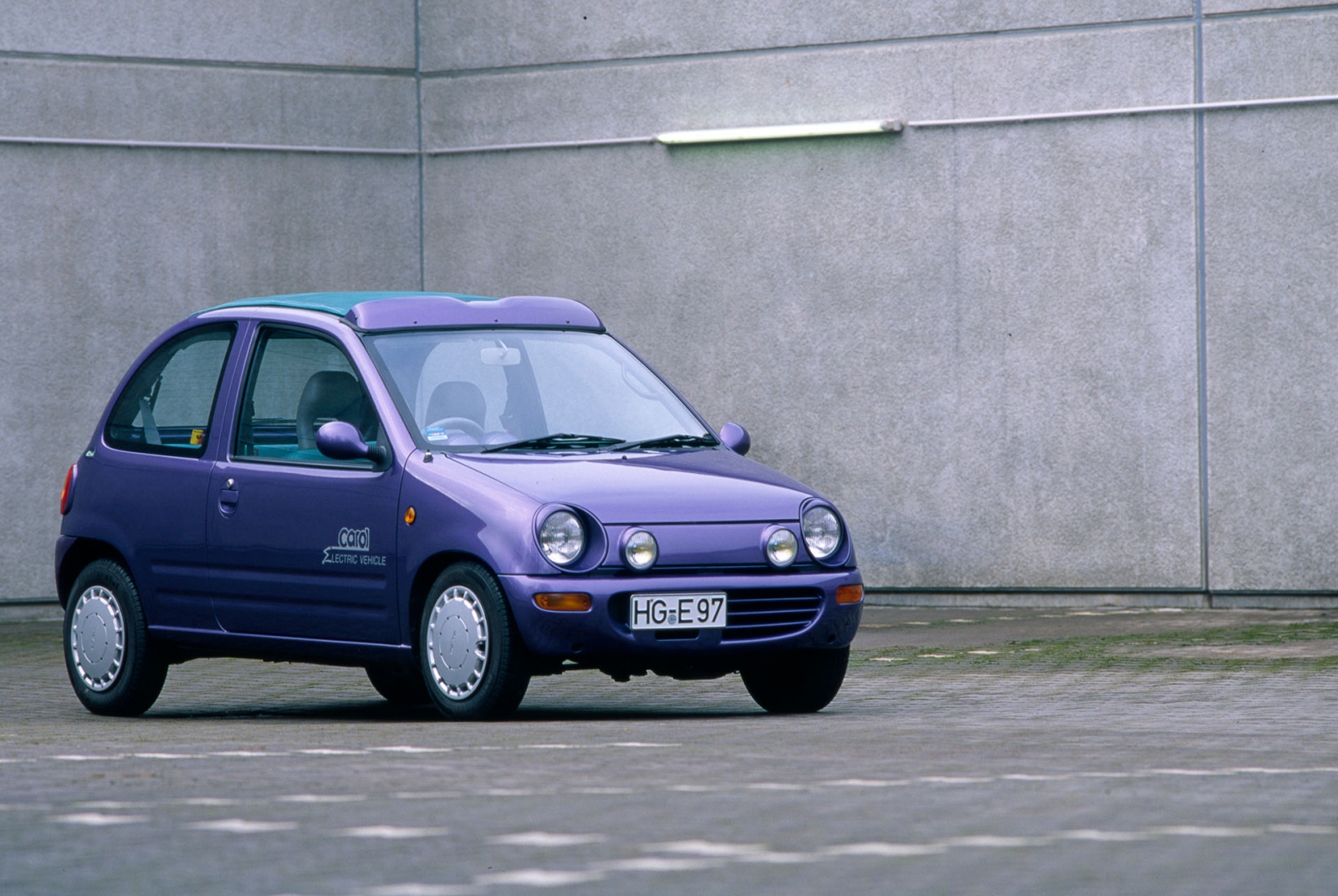 Mazda has revealed its first mass produced electric vehicle at the Tokyo Motor Show but not many people know that 25 years ago Mazda Research Europe developed an electric prototype vehicle that ran on German roads and even won several international prizes.

So in the words of Christian Schultze, Director Technology Research at Mazda Motor Europe R&D, here’s the story of this little known Mazda EV experiment:

In the early 1990s Germany had a very famous environment minister: Dr. Angela Merkel. On the European surface there were already discussions about dramatic emission reductions and electric vehicles came into discussion, but not based on automotive OEMs: small companies in Switzerland, Germany and Italy developed so called LEMs – Light Electric Mobiles – with funny names like ‘Horlacher Egg’ or ‘Hotzenblitz’.

The German, French and Italian governments became aware about this and discussed with the traditional OEMs if they could also build electric vehicles.

As a consequence three ‘large scale’ demonstration projects were started on the island of  La Rochelle, in the city of Mendisio in Ticino/Italy and on the island of Rügen in Germany with several hundred vehicles. Ms Merkel declared that by the year 2000 she wanted to see 10% of all cars to be electric. Sounds as if we have heard similar again.

At that time I was a young engineer at Mazda Research Europe (MRE) and got in contact with the University of Darmstadt, where a group of students founded the AKASOL, an association of about 20 students that wanted to promote electric vehicles.

They were at that time already real experts, they had developed a solar cell powered ‘race’ car that successfully crossed Australia in a competition.Now they were looking into how to create something useable for normal people. Immediately I was fascinated by the idea to create a Mazda EV and also knew which vehicle I wanted to convert: an MX-5.

I started to develop a project idea and shared it with my boss. Some negotiations with Japan started, but it became clear that MX-5 was not the vehicle Mazda Corporation wanted to become an EV.

However, in Japan the decision was made that a Carol, a small K-car that we offered at that time, would be of interest. So I was asked to make a detailed work and cost plan. At the end we were granted 20,000 D-mark and a Carol vehicle in red.

Also together with AKASOL, MRE made a contract and nearly a dozen of students started to develop the conversion plan with me. Three of them even wrote their master thesis about parts of this project, e.g. about the battery control and cooling system. Our aim was to make a real city car with four seats – just like the original. So all the batteries had to fit under the rear seats and into the engine room. Lightweight was our clear goal as it allows to use a small motor and a small battery. At the end we had a total weight of 1,060 kg. It was an exciting project and we worked after office time many hours in the university. To make it even more attractive MRE’s design and modelling team then took quite some time to make our Carol really fancy and with a violet exterior and green interior it became truly remarkable.

Carol EV became a real city and suburban EV. As our motor had only 12 kW nominal and 27 kW peak power, it was not a race car, but city driving and suburban was really fun, standing start at the traffic light created many astonished faces! We had an accelerator pedal that also controlled the recuperation and with careful driving, the vehicle could go over 100 km/h easily.

In those days also the OEM’s EVs were not as powerful as today, the BMW EV1 had also only 37 kW. At that time lead batteries were the technology available, but we found rather quickly that after a few hundred charges, the battery died. As the budget was so low, we became experts in getting donations from the industry for our project. We then got in contact with a French battery maker and got some nickel cadmium batteries for free that were pretty similar to today’s lithium ion batteries in performance and lifetime.

With the new batteries our Carol participated in various EV competitions and won prizes as best prototype vehicle at the Tour de Sol and other EV races including the Rally Monte Carlo for EVs. Also TV channels invited us and reported about our cute city car and we presented it in international conferences in Japan and in Europe.

My students finished their theses successfully and today they are all working in the car industry at Lamborghini, Opel, Daimler or Smart, where one from my former team developed the first Smart EV. So we all learned a lot. Soon after this project the nickel batteries got prohibited and lithium batteries were in their infancy, so there was no technology to make a viable next concept. As an alternative  I proposed to MC a multi-mode hybrid technology that could switch from EV-Range Extender mode to parallel Plug-in Hybrid, but the experiences with Toyota’s hybrid technology made my colleagues in Japan refrain from hybrid technology.

Nevertheless, the Carol EV was used by AKASOL for several years in Darmstadt on a daily basis and they even continued to develop a purpose design city EV called Oscar. With all their experiences in EVs and batteries AKASOL finally became a company and they are now successfully producing specialty Li-ion batteries for trucks and buses in Darmstadt.

This is the short story about the first European Mazda EV and I am so excited to sit in our brand-new Mazda EV next year!