Up And down weekend for Mazda in Detroit 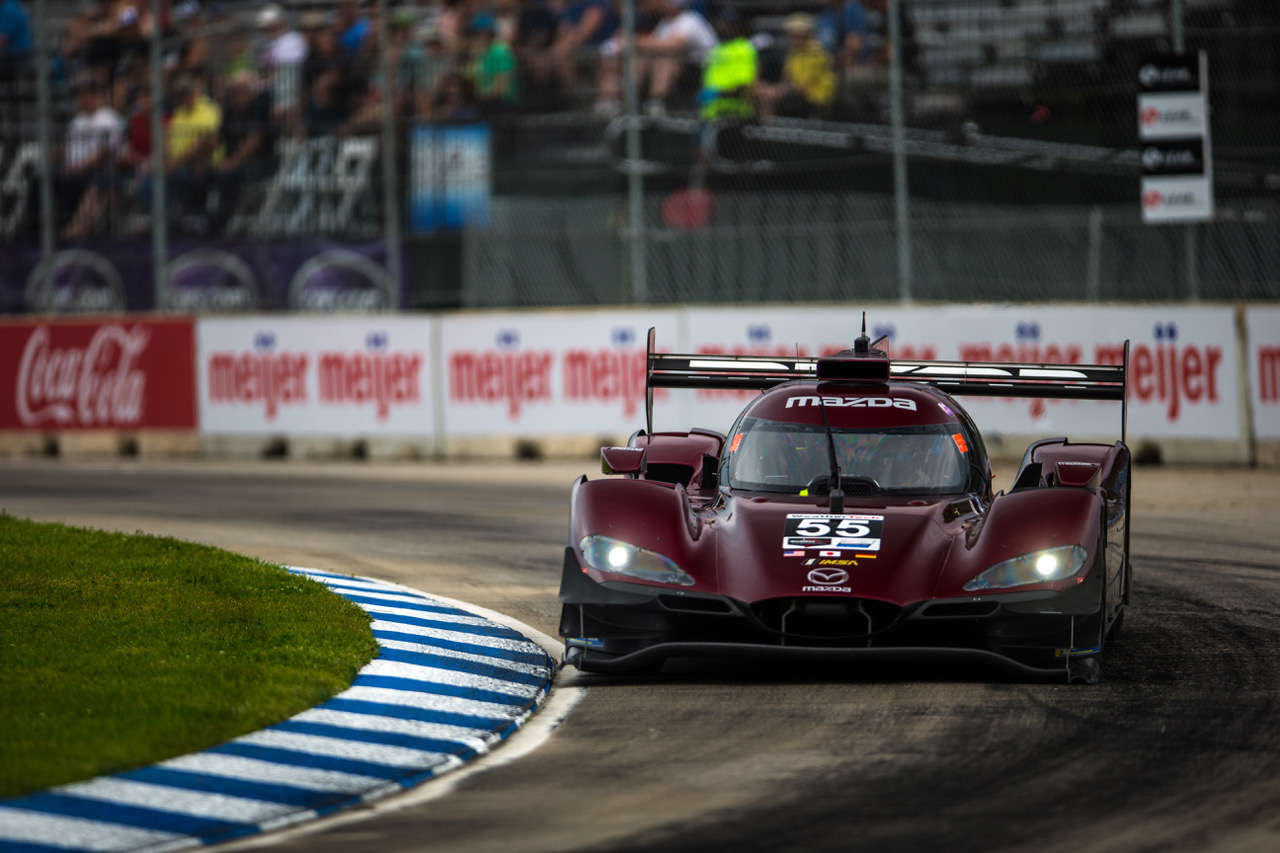 – A challenging weekend ended with a tough result for Mazda Team Joest at the Sports Car Classic held on the streets of Belle Isle in Detroit, Michigan.

The No. 55 Mazda RT24-P, qualified in third position by Jonathan Bomarito, jumped into second position at the start and was locked into a battle for second position throughout the opening segment of the race. After the car was taken over by Harry Tincknell, who was in fifth position as alternate pit stop strategies played out, it was involved in an incident where Tincknell was hit by a car attempting an overtaking maneuver, sending him into the tyre wall in turn four. The damage from the incident forced him to retire the car from the race.

Starting in seventh position, the No. 77 Mazda RT24-P driven first by Tristan Nunez employed an alternate pit strategy to gain track position on the difficult-to-pass Belle Isle circuit. Staying out when the rest of the field pitted, Nunez and Jarvis were attempting to complete the race on one stop. After running as high as first place, a caution flag negated their advantage and, on the restart, Jarvis was hit into a spin by another car. He finished the race in ninth position.

The next race of the IMSA WeatherTech Sportscar Championship will be the Sahlen’s Six Hours Of The Glen at Watkins Glen International on the 30th June.

“The race today was definitely not the outcome that we were hoping for. Our drivers and team executed really well today, we led laps with the No. 77, and both cars gave us a great chance of success today at Belle Isle. We were, unfortunately, on the receiving end of contact with both of the cars right after restarts. It was particularly tough for the No. 55, because Harry had just executed a great pass for third place and the damage put us out of the race. We’ll rebound from here and be ready for the next race at Watkins Glen.”

“The initial stages of the race were pretty good. I had a good start, we were just a bit slower to build temp into the tire. But, we kept getting faster and faster and I had a good scrap with Derani that was really fun and got us into second. It was pretty drama-free, just hard racing. I feel really bad for Harry, he drove a great race and pulled off that amazing pass down into turn three and then got hit in turn four – in my opinion, not his fault at all. It was a really tough day for Mazda, but we showed a lot of perseverance as a team in turning around our lack of practice into two really fast Mazda RT24-Ps. There are a lot of positives to take from this weekend, and to apply what we learned as a team.”

“We started off playing catch-up after first practice, had a decent practice two and then Jonathan did a great job in qualifying to put us in third. With the missing practice time, we didn’t have time to do a long run and I think in the race we didn’t have quite the advantage that we did in qualifying, but it was still a very fast Mazda RT24-P and it’s a shame what happened. I had to go for the pass in turn three, had a lot of wheelspin on the exit, came across to defend and the other car sent me into the wall. It’s hard racing and street circuits are difficult to pass – but that was a very hard move. That’s just the way it goes sometimes.”

“It’s difficult to recover from missing track time. This is not an easy track, and that lack of time affected our qualifying and our race. The Mazda Team Joest guys did a fantastic job and we made huge practice in the second practice, but we had to try something different with the strategy, which we did, and unfortunately it didn’t work out. We’ll come away from this weekend, regroup, and just learn from it.”

Tristan Nunez
“It was pretty much complete chaos out there today. It’s a sprint race – around the streets of Detroit nonetheless – so you expect everyone to be driving really hard. Our Mazda RT24-P was really, really quick in clean air but I think we were all struggling in traffic. Once we gambled on strategy and got some clean track, I lost the spot to the Penske but I was able to stick with him on old tires which shows the pace we had in the car today. We had to take a gamble which is the sort of thing you need to do in these races, so hat’s off to Mazda Team Joest. From where we started in first practice, it was a huge rebound given that the No. 55 was able to qualify in third. There’s a lot of good takeaways from us from this weekend.”