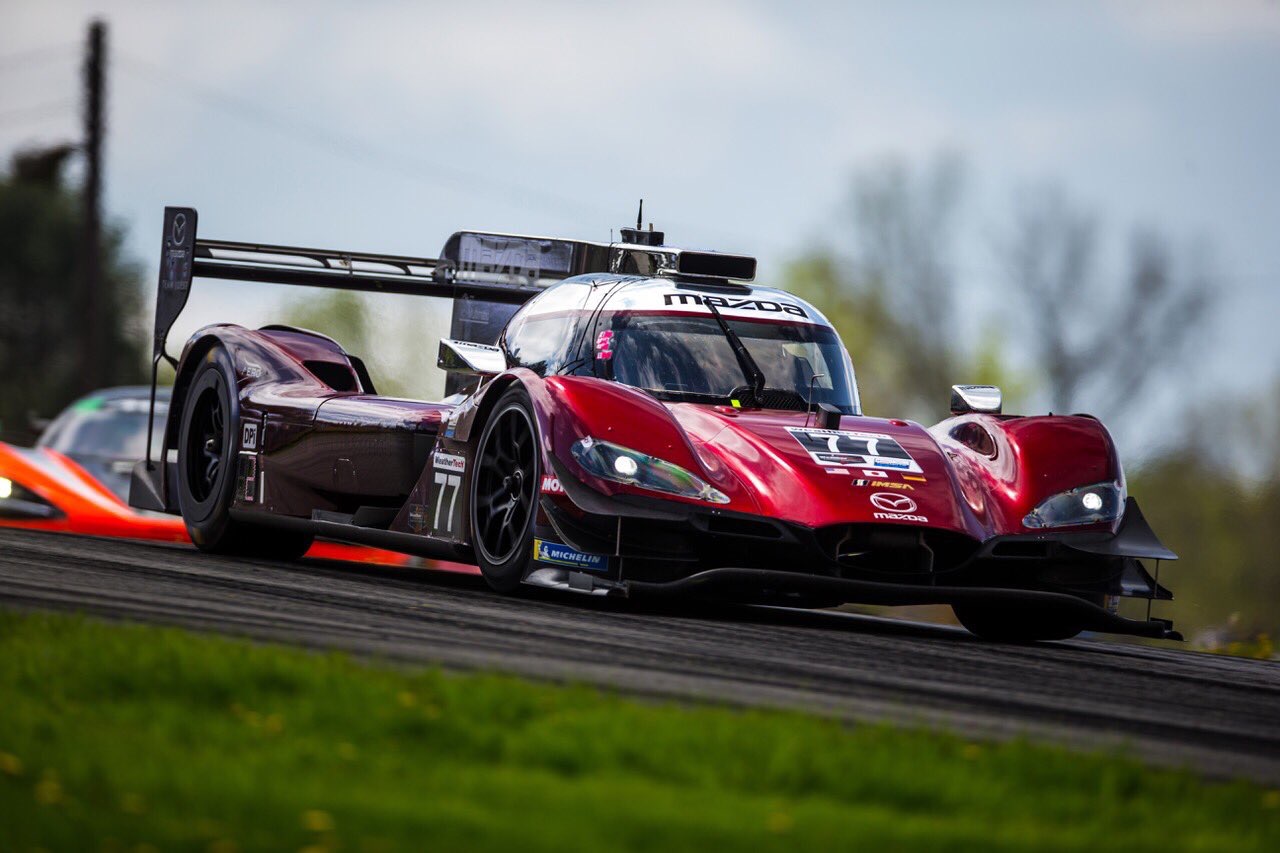 Mazda Team Joest earned its first two podiums of the season on Sunday afternoon at the Mid-Ohio Sports Car Course, when the Soul Red Crystal Mazda RT24-Ps finished a fighting second and third in the Sports Car Classic.

The fourth round of the IMSA WeatherTech SportsCar Championship saw the No. 77 Mazda RT24-P start the race from pole position thanks to the record-setting qualifying effort of Oliver Jarvis, with Ryan Hunter-Reay starting in sixth position in the No. 55 Mazda RT24-P.

Jarvis battled for the lead during the opening stint, trading the lead several times while Hunter-Reay recovered from contact on the opening lap to move up to third position. Jarvis, back in the lead, turned his Mazda over to Tristan Nunez for the closing stages of the race. Nunez joined the race in second position and battled for the lead while Hunter-Reay, in third position, turned his Mazda over to Jonathan Bomarito. A late-race yellow flag bunched the field, but did not change the order and Nunez crossed the finish line in second position – 2.022 seconds behind the winner – while Bomarito crossed in third.

Jarvis recorded the fastest lap of the race, setting a lap of 1:12.410 around the 2.4-mile Mid-Ohio circuit. As both Jarvis and Hunter-Reay led the race during Sunday’s Sports Car Challenge, Mazda has led at each race throughout the 2019 season, earned two pole positions and started on the front row in three of the four races. Jarvis has also set lap records in qualifying at Daytona International Speedway and Mid-Ohio.

The next round of the IMSA WeatherTech SportsCar Championship will be May 31-June 1 at The Raceway at Belle Isle in Detroit, Michigan.

“I was really pleased that we were in the mix today at Mid-Ohio, with Olly starting from pole position and trading positions for the lead during the opening hour in the No. 77 Mazda RT24-P. Ryan had a tough start, getting hit by another car, but luckily came back from that to drive up to third place. This is the fourth race in a row that we’ve led and marks our second pole position of the season. While we just missed out on the win today, to have both of our Mazda RT24-Ps on the podium is a great result.”

“This is a pretty great day for Mazda, to be on the podium with both of our cars. Olly had a big fight on his hands during the opening stint, so I knew that the other cars were strong but our No. 77 Mazda RT24-P was also strong. But definitely when the sun came out at the end, we were struggling with grip and unless something drastic happened, we weren’t going to catch the leader. I think we are a little bit disappointed to be so close to the win and miss out, but it was a great weekend and a great effort by everyone at Mazda Team Joest. We are so close, we had the pole, we just need to close it out now.”

“We are happy with the effort we put in and I really think everyone on the team should be proud of the job they did this weekend. It was a really challenging weekend with the changing conditions, and I think we were all a bit caught out that the race was not only dry but that the sun came out which really changed the grip levels. But to have both cars on the podium is another step in the right direction, and clearly shows that Mazda is on the right track. We’ll look to bring that momentum to Detroit.”

“I’m pretty proud that we have our first podium of the season, and to have both of the Mazda RT24-Ps in the top three here at Mid-Ohio. It’s a really great day for the team as a whole. The start was definitely nerve-wracking, with Ryan getting hit, but luckily it didn’t really affect the car. We never really had the pace to challenge the top two, and I fell into a battle for third at the end of the race, but with all that being said it was a good result for us and I’m happy for everyone at Mazda to get this double podium. Ryan did a really great job, especially having to deal with not having much dry running before the race, and it was great to share the car with him this weekend. We want that win so bad, and we’ll come out strong at Detroit.”

“It was a positive weekend for Mazda Team Joest to finish second and third. The first win is coming. It was an eventful day – I had a great start and got around three cars, but then I was t-boned and lost three spots. Somehow the car kept going and I didn’t spin, but I made those three positions back and then ran in third place the whole day. The No. 55 Mazda RT24-P was worthy of a podium. I wish we had been up there fighting for the win, but we were always behind on track position today. It was a great weekend and I’m happy to have joined Mazda Team Joest here in Mid-Ohio.”