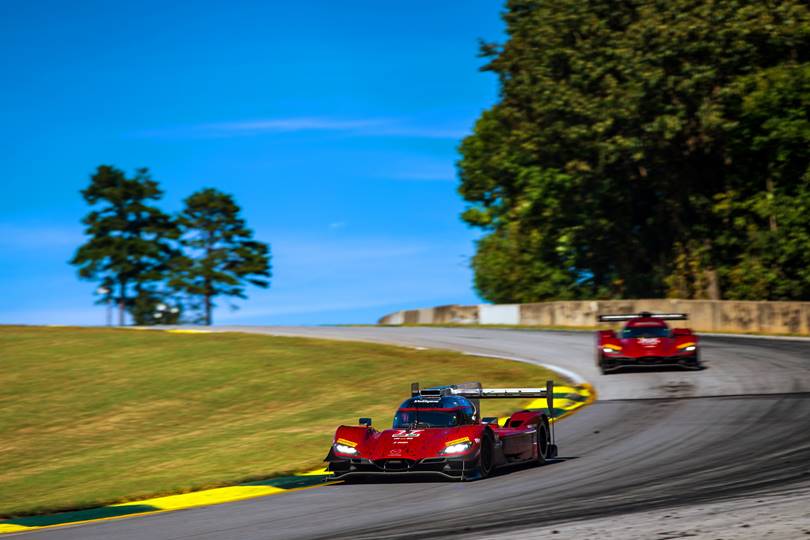 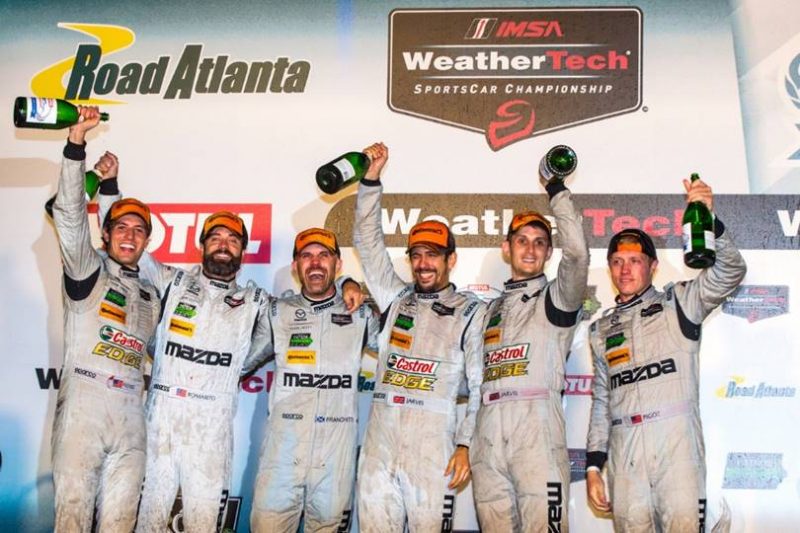 After qualifying in second and third, both Mazdas factored into the battle for the Prototype race lead throughout the ten-hour race. However, the two cars took different paths to the podium in the final IMSA race of the season.

The No. 77 Castrol/ModSpace Mazda RT24-P driven by Lucas di Grassi, Oliver Jarvis and Tristan Nunez had a relatively trouble-free run, leading multiple times throughout the race. The No. 55 Mazda RT24-P, started by Jonathan Bomarito and also driven by Marino Franchitti and Spencer Pigot, led the early stages of the race. Contact forced the team to change both the nose and tail of the Mazda RT24-P, and the drivers had to recover after going a lap down while making repairs.

Bomarito was able to regain the lead lap in the seventh hour of the race, allowing Pigot, who took the Mazda over with two hours to go, to battle for the win with Jarvis in the No. 77 Castrol/ModSpace Mazda RT24-P just ahead on track. As the Prototype teams began to take their final pit stops, the team opted to give up track position to ensure enough both cars had fuel to make it to the finish. In the closing stages, the two went from sixth and seventh to third and fourth positions and then, on the final lap as both cars approached the checkered flag, they passed the second-placed car in the final corner. 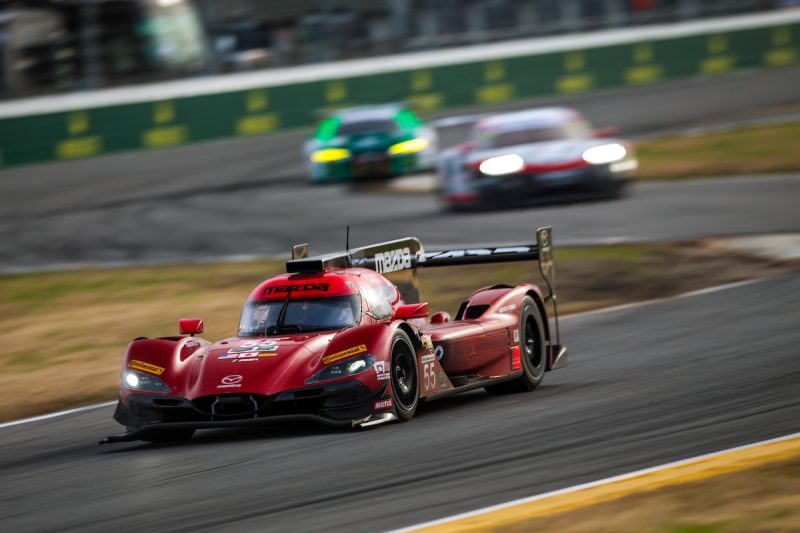 The 2019 IMSA WeatherTech SportsCar Championship will begin with the traditional Rolex 24 at Daytona on January 27-28, 2019 at Daytona International Speedway.

“It’s fantastic to get a double podium to close out the season. Certainly, this gives us a lot of positive momentum going into 2019. We are not fully satisfied, we wanted the top step and that’s what we came to do, but this represents an incredible effort by the team. This result also reflects a huge effort by Mazda Team Joest and Multimatic to get this race car where it is today, by AER to put together a season of great reliability, and by the Mazda Team Joest crew. Now, we focus on 2019 and the Rolex 24.”

“This is very positive for Mazda and the team. It’s a dual podium in one of the toughest races of the year so, we have a lot to be proud of as a team and as a manufacturer. It’s great momentum moving into next year and it’s the first podium for the No. 55. Of course we would have loved to win, but you have to step back and appreciate it, and we had a great day with this double podium. We came back from a lot of difficulties, to say the least, so were flat out the whole way to salvage a third place. We felt like we were really strong and could have potentially won, but I think we have to really be thankful for this podium finish.”

“I knew we were in good shape with the fuel in the final hour, and it was surprising to see how far some of the other guys were going. Our Mazda RT24-P made great fuel economy today and that’s what allowed us to get this result and we were working hard on that throughout the day. To finish second and third, it’s a little bit frustrating to not get the win, but we had to change the tail of the car and the nose of the car, so we came back from a lot of adversity. But it’s the ‘what may have been’ – we wanted to get that win so badly for Mazda. My teammates Jonathan and Spencer did an amazing job and I really have to thank them for being so great to work with. Hopefully we come back next year and try again.”

“This whole race was pretty crazy. But the last lap I came over the hill and saw the No. 5 car going really slow, just coasting down the hill, and there was a GT car between me and him. I didn’t have too many options so I just kind of threw it to the outside and ended up going off the track and bouncing in the dirt to the finish line but we got ahead and into third place. So, it was kind of a fitting end to the race we had today. It was kind of messy at times, but we all pulled together and it’s great to have two Mazdas on the podium.”

“I am super happy to have been a part of this race with Mazda, my first IMSA race, and to have been with them to achieve the best result of the year for Mazda with Oliver and Tristan. I’m super proud of the team, they did an amazing job. We all fought very hard, for ten hours, to have a good race on a very difficult track. With a double podium, I think we did the job. It’s an unbelievable success. So, I’m super proud of everyone – the team, the car, the mechanics and my fellow drivers.”

“You know, we were comfortably in third and I knew the guys ahead of us were struggling with fuel. Approaching twelve, the No. 5 car was slowing up on the last corner, and there was enough time to get ahead of him into second and for Spencer to move into third. But what a race, I have to say this is a really tough race. We had the pace, and I have to say right now I’m a little bit gutted. I’m proud of what we achieved, but I really wanted to deliver that win for Mazda and it was so close. It’s one of those races where it’s just flat out, its really tough out there. Big thanks to Mazda Team Joest, Multimatic, and AER.”

“I’m at a loss for words. A win is the main goal but having two Mazdas on the podium here at Petit Le Mans is the next best thing. We needed it badly, and to snag it at the last race – on the last lap – I’ll take it. It’s pretty incredible. It was an incredible drive by Olly and Spencer in the last couple of stints, saving fuel the way that they did made this double podium possible, and by all of the guys today. It’s really superb.”