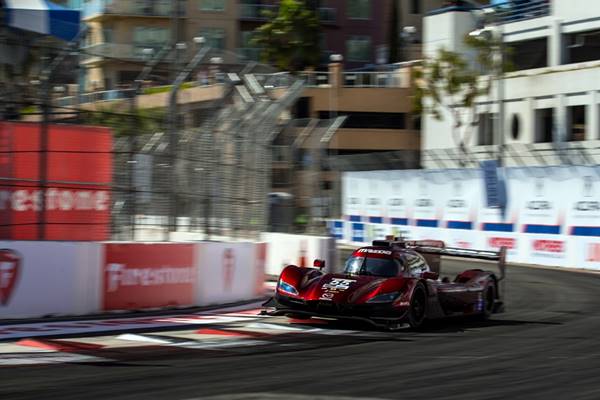 The opening lap of Saturday afternoon’s BUBBA burger Sports Car Grand Prix at Long Beach saw both Soul Red Crystal Mazda RT24-Ps march forward through the Daytona Prototype field, as Tristan Nunez went from fifth to third in the No. 77 Mazda RT24-P while Jonathan Bomarito, in the No. 55 Mazda RT24-P, went from 11th to sixth.

Bomarito had been relegated to the rear of the field, after damage sustained during Friday’s qualifying session forced the team to replace the tub of the No. 55 Mazda RT24-P before Saturday’s 100-minute race. Nunez, who had originally qualified in sixth position, was moved to fifth as a result.

After storming through the field in the opening lap, Bomarito was slowed again by an incident in turn eight of the Long Beach circuit which saw the car spin and make minor contact with the wall. Bomarito and teammate Harry Tincknell finished the race in eighth position. Nunez, who a few laps later advanced to second position, turned the car over to Jarvis during a full course caution. Jarvis led the race until his final pitstop, when he emerged in fourth position, the spot he held to the checkered flag.

The next round of the IMSA WeatherTech Sportscar Championship will be at Mid-Ohio Sports Car Course on May 3-5.

“I’m really proud of the effort that our team put in this weekend. The crew from the No. 55 car put in a huge effort to have the car make the grid, and the starts by Jonathan (Bomarito) and Tristan (Nunez) were just amazing. To make up that many positions at one time on a street circuit is, frankly, miraculous. Thanks to Tristan’s amazing start, it put us in a position to win with the No. 77, but it didn’t quite work out for us the way that the fuel windows fell and the lack of any full course yellows in the final hour.  Despite the challenges this weekend, we were proud to represent Mazda at our home race in front of our employees and fans, and we look forward to the next race.”

“It was a pretty tough day for us in Long Beach. The crew deserves a lot of credit for having the car prepared for today, and it was working really well at the start of the race as I was able to pick up a few spots. But, I ended up in a situation where there were three cars were going for the same space on the track, and I tried to minimize the chance for contact but I ended up spinning. It’s unfortunate because the car was obviously fast, and Harry had good pace as well during his time in the car. We’ll put this one behind us and go for the victory again at Mid-Ohio.”

“I’ve got to say, Jonathan’s start today was one of the most amazing starts I’ve ever seen – especially on a street circuit. After one lap he almost had us back to where we had qualified initially, and with all the Mazda employees and fans in attendance I’m certain it was very exciting for them. It was frustrating that we then lost so much time and couldn’t really contend for a good result because I thought the car was very good during my stint. We had good pace and could have been a factor. So, we’ll press on and have another go at the next one.”

Oliver Jarvis
“We had a really good opportunity to win today, which of course is exactly what you want as a driver – to be in a position to battle from the front. We will really have to analyze what happened at the end of the race because the car was really strong over my first stint, but then we just didn’t have the pace. This one slipped through our fingers, but we’ll take another shot at Mid-Ohio. For me, this race has a great feeling of being a home event since it is so close to Mazdas offices, and I hope everyone who came to support us this weekend knows how hard the team worked to bring them a good result.”

Tristan Nunez
“It was fun at the start, to go from fifth to third, and we were in the fight. We know we can fight with the guys at the front and it’s great to be in that position, it’s just too bad we didn’t have the pace at the end there to fight for the lead. The crew did an amazing job in the pits and Olly did an amazing job to lead and keep the car up front for as long as he did, and then to hang on at the end with the tires falling off. We had a good time racing in front of our friends from the Mazda offices here in Southern California, and we are already looking ahead to the next one.”