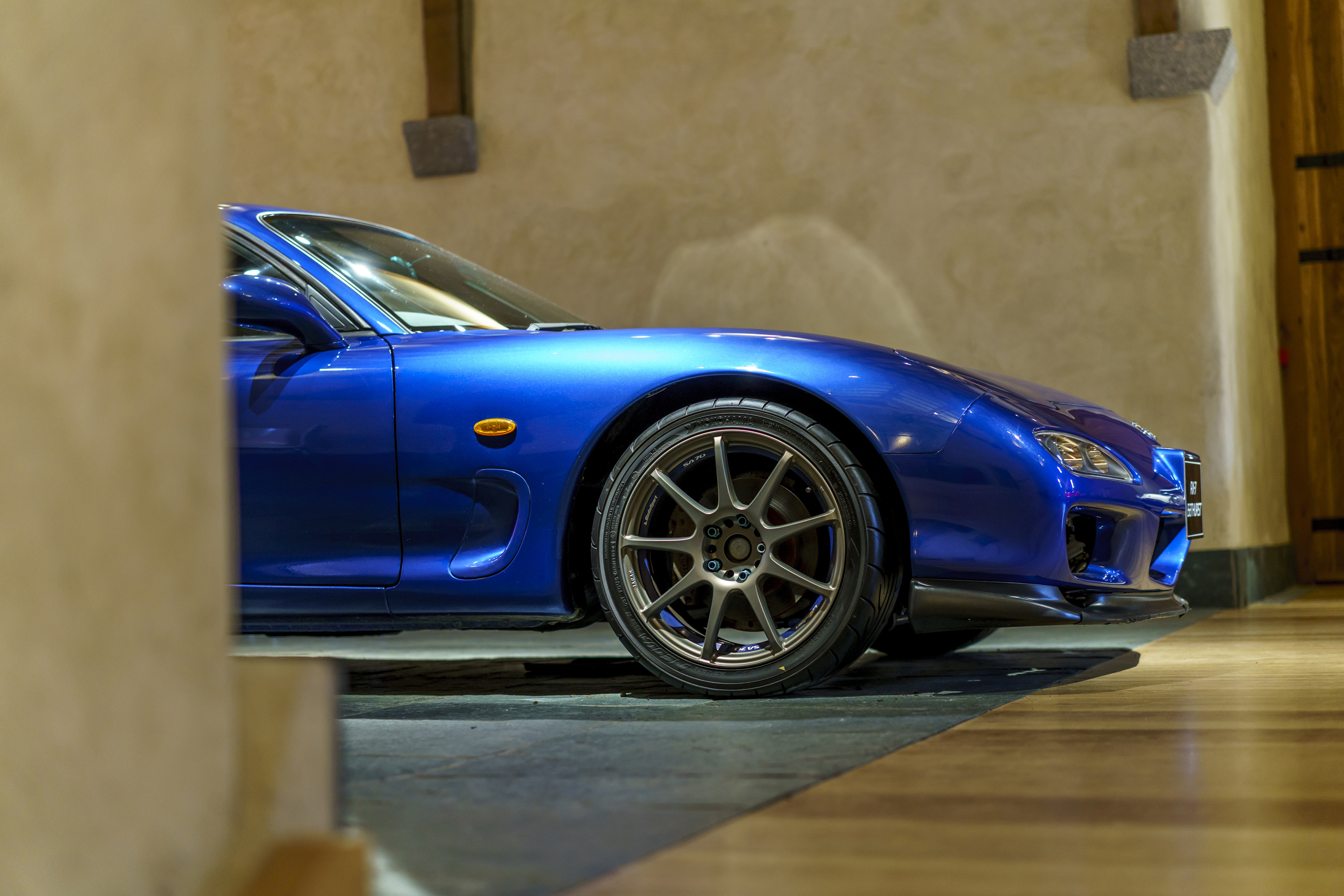 The Led Zeppelin fan who makes the rotary engine sing 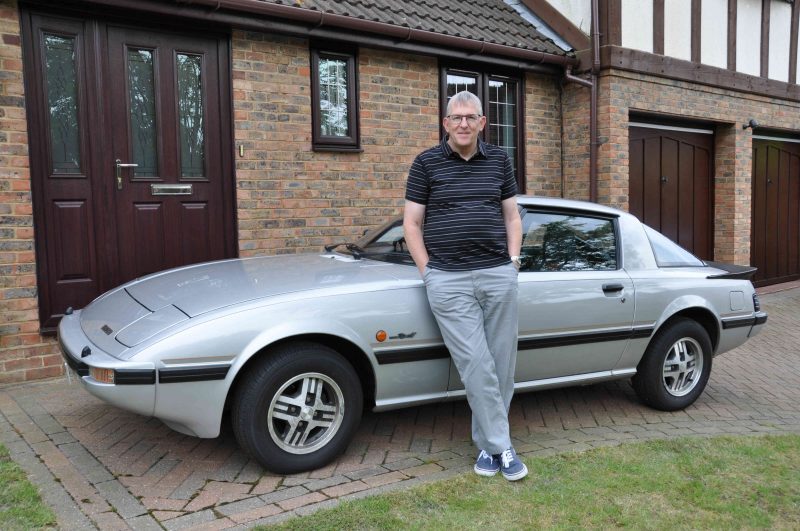 When it comes to retirement, some people like to take up dancing. Others go for a spot of golf. And an adventurous few might sling a backpack over their shoulder and explore far flung corners of the world.

For 62-year old Malcolm Case, such pastimes – pleasant as they might be – wouldn’t hold his interest and provide a long, meaningful challenge for his technically-inquisitive mind.

The former electronics engineer needed a project he could get his teeth into. In the end, that project turned out to involve not one, but two first-generation Mazda RX-7s.

His interest in Mazdas blossomed in 2004, when he was treating himself to a new car. “I’d been reading one of the glossy car magazines, looking into what cars were around, and made a shortlist of models to test drive. The RX-8 was the first car I test drove and of course, then I crossed all the others off my list! Why bother to drive them when I loved the Mazda so much? It was so different, from the engine to the doors to the design.”

It was Case’s first Japanese car – and wasn’t to be his last.

After becoming immersed in the scene around Mazda’s rotary-powered cars, he spotted a first-generation RX-7 for sale and on a whim, in 2011, decided to scratch that itch.

“You can see the heritage under the bonnet – that compact engine, the 50:50 weight distribution and the way it was designed as a sports car from the ground up”

“I received an email from a forum member, about an RX-7 that was being sold by the widow of a gentleman who had owned the car for years. So off I went to Yorkshire, picked up the car and after a couple of months got it back in working order and on the road.”

After a few years of enjoying the A-registration model and taking it to car shows, Case started to think about taking it off the road for a more substantial restoration. “I needed a long-term project for retirement so planned to put the car in my garage and set to work on it. Then [in 2015] a member of the RX-7 owner’s club got in touch to say he had a tatty, first-generation car for sale that he didn’t have room for, and it needed to go to a good home for scrap value, potentially as spare parts…” 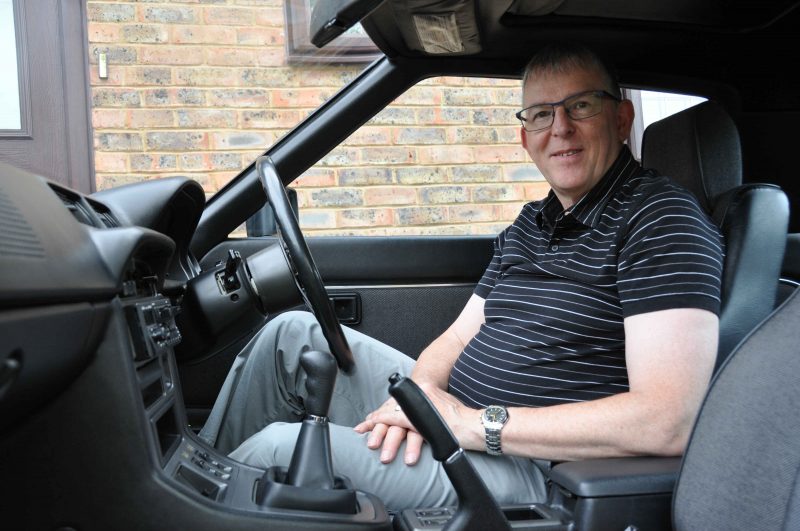 It turned out the car had the same A77 registration prefix and was the same colour as the RX-7 he already owned. It was also in considerably better condition than the seller’s ‘parts or scrap’ description.

With two RX-7s to tend to, isn’t he overwhelmed? “It’s so easy to work on,” says Case. “I love the simplicity of the RX-7 compared to my RX-8. Yet you can see the heritage under the bonnet – that compact engine, the 50:50 weight distribution and the way the car was designed as a sports car from the ground up.

“This makes it light and agile. The steering system is rather slow, but you get used to it and the driving position is spot-on. And although 110bhp doesn’t sound much, the lightness of the car and the way the engine loves to rev makes it terrific fun and different to anything else of its era.”

It’s this difference that attracts Case to Mazda. The unique powerplant and ambitious engineering–led philosophy earn his respect.

What’s the plan for his pair of RX-7s? “To restore them both, one at a time. Then keep on enjoying them. With a Led Zeppelin cassette in the tape player and that engine for company, I’ll never tire of what is unquestionably the first successful rotary-engined sports car.”

“I liked it so much, I bought another” 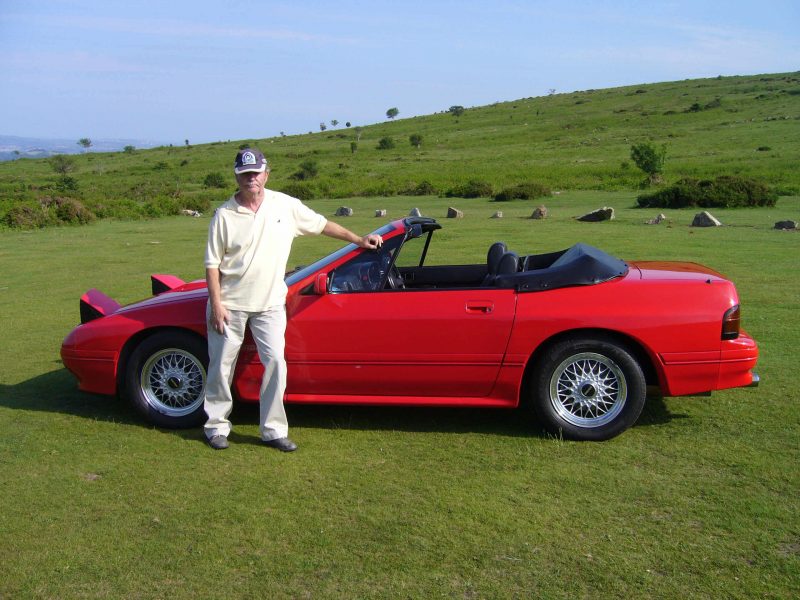 At the end of the 1980s, when the only-ever cabriolet version of the Mazda RX-7 was introduced, Japanese upstart Mazda might have been creating a bit of a stir in petrolhead circles. But it wasn’t widely recognised as a rival to Porsche.

Mazda did its best to spread the word – including having Hollywood actor James Garner front television adverts for the American market.

However, in Britain a price of around £30,000 steered it into a head-on collision with sports cars from BMW, Mercedes and Porsche.

This most likely explains why only an estimated 350 examples of the second generation RX-7 were sold here. The rarest of the lot was the cabriolet, and precise production numbers are hard to come by.

It’s this exclusivity that partly explains why Peter Symons snapped one up. Now retired from the builders’ merchants trade, and living near Newton Abbot in Devon, Symons had owned an NSU Ro 80 – which also uses a rotary engine – in the early 1990s. He then moved on to a first-generation Mazda RX-7, before adding the second-generation convertible to his collection.

“I’d been looking for one for a while. As you can imagine, they’re hard to find, and it had to be rust-free, which further narrowed down what limited choice I had!”

“I’ve owned all sorts of interesting cars over the years, including a Jensen Interceptor and Saab 99 Turbo, but the RX-7 is the one I won’t be parted from.”

Perseverance paid off though. An example came onto the market that had only two owners from new, with the last keeping it for 12 years and only driving it for 1000 miles.

“To be honest, that sort of mileage doesn’t suit the engine.” He needed to get to the bottom of a problem with the engine’s throttle position sensor. And with a car from an era before technicians could plug in diagnostic equipment to find faults logged in a car’s ECU computer, that had deterred the car’s previous owner from driving it. 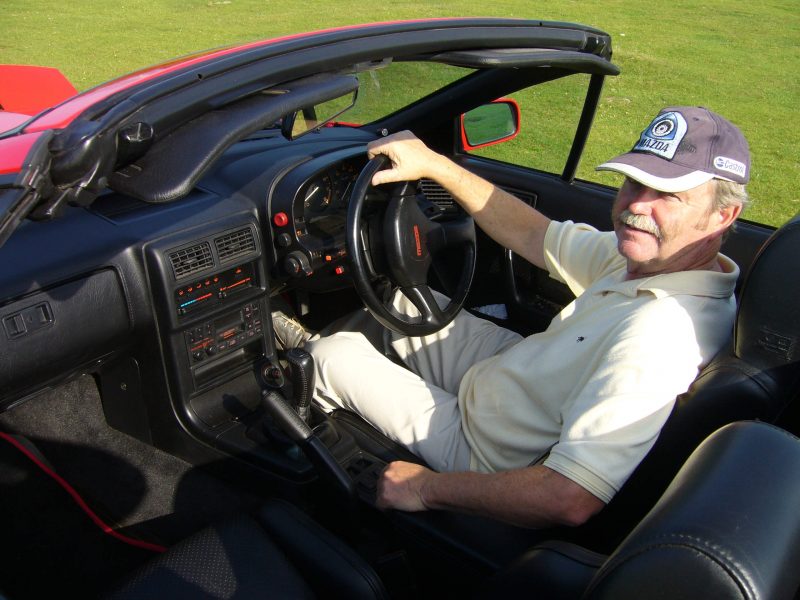 “I knew it would be a process of elimination and patience,” says Symons. “After a few weeks of experimenting and sourcing an original manufacturer service manual from Australia, I got to the bottom of the problem.”

In the UK, the convertible was only sold with the twin-turbocharged 13-B rotary engine, which boasted 203bhp – a big jump over the previous generation RX-7.

There were some other improvements that showed how sports cars were powering into the digital age. Such as Mazda’s new Auto Adjusting Suspension system, to prevent pitch and dive, rack and pinion steering and disc brakes on all four wheels. Then there was the convertible roof…

It featured a heated rear window and could be lowered in two stages, either entirely, after releasing two catches and letting an electric motor take care of the rest, or by lifting out a panel above the driver and passenger, rather like a targa top car.

Another feature Symons likes to point out is the wind deflector. Mazda’s engineers had researched the effects of turbulence on the cabin with the roof down, and discovered that buffeting was caused not by wind passing over the windscreen but ricocheting off the rear deck. They developed the Windblocker, which flips up and is claimed to not only reduce turbulence but help maintain a warmer temperature on a chilly day.

“One of the benefits of having the convertible is you can hear the rotary engine better. The first thing people say about any rotary is how quiet the engine is, but in my car it’s more exciting to listen to.”

Does he feel that the RX-7 doesn’t get the recognition it deserves? “In Britain, I’d say that’s true. People seem afraid of RX-7s which is a shame. They don’t sell for the prices they are worth, if you ask me. I’ve owned all sorts of interesting cars over the years, including a Jensen Interceptor and Saab 99 Turbo, but the RX-7 is the one I won’t be parted from.”

“I bought it unseen – from Japan!” 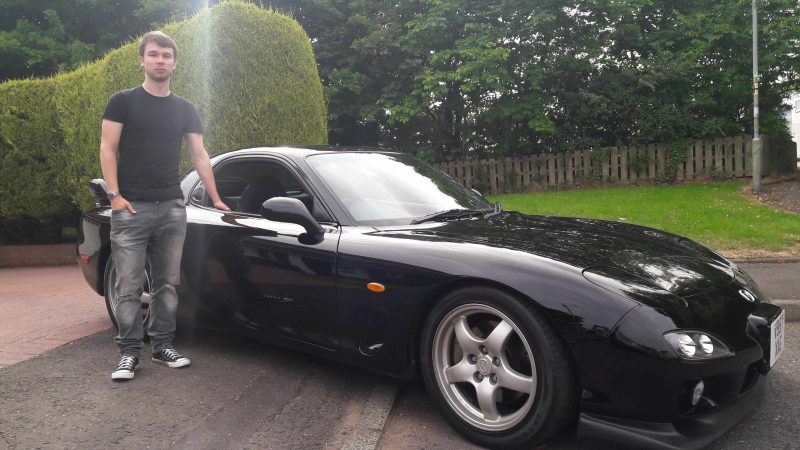 Kerr Samson isn’t a gambling man. But when sourcing and buying the sports car of his dreams, he took one of the biggest risks of his life.

The 25-year old PhD student develops biomedical implants and biomaterials at Heriot Watt university in Edinburgh. It’s an exacting blend of science and biology that leaves no room for error.

So why buy a complex sports car, like his RX-7 Type RS, unseen and from the other side of the world?

“I’d done my homework and found Torque GT, a reputable importer of specialist cars from Japan. They came recommended but even so, I’ll admit it was a big risk.”

Samson had to pay a deposit to bid remotely on the car at auction in Japan, then pay another 40 per cent of the balance after making a successful bid. The remaining sum was to be settled when the car arrived in the UK.

Happily, the car turned out to be as good as he was hoping for, at least cosmetically. Next came an eight-hour drive home from Plymouth to Edinburgh, but even that didn’t set off any alarm bells. Finally, there was an appointment with a rotary-engine specialist who confirmed that the engine and sequential turbos were as fit as the day the car rolled off the production line.

“It is the most expensive thing I’ve ever bought, and involved a very large trust process,” he laughs. The obvious question, then, is why did he take such a risk?

“I’d owned a Mazda RX-8 for three years and had the money and job security to take the financial risk at that time in my life. And the RX-7’s reputation was the stuff of legend.”

The power delivery of the third-generation RX-7 is the thing that impressed Samson most. It features one turbo that operates low in the rev range and another that kicks-in higher in the rev range.  “That gives the rotary engine a whole stack of torque and infinitely more power than my old RX-8,” says Samson.

He then jokes about how he has the perfect excuse to drive it hard, referring to the car’s audible gearchange warning: “A beep a day keeps the carbon away.” 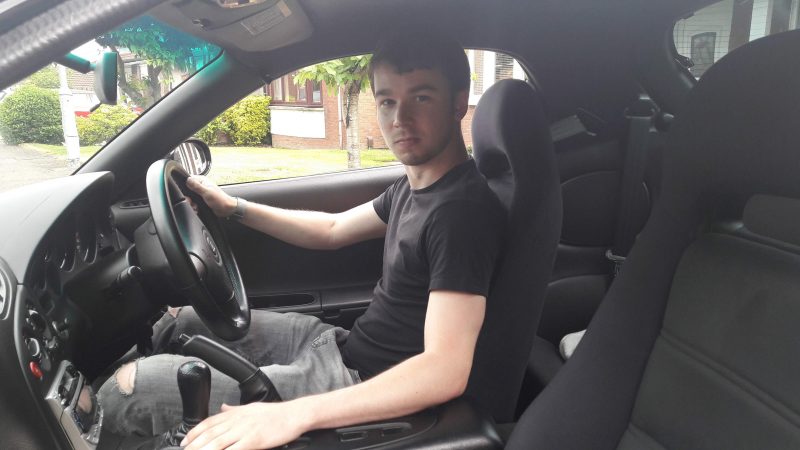 Bearing in mind the car’s age – 19-years old – and absence of electronic driver aids (with the exception of anti-lock brakes) the obvious question is whether the 276bhp RX-7 Type RS is a bit of a wild child?

“Not a bit of it, actually,” says Samson. “The way the RX-7’s chassis gives you information means you feel everything, from what each wheel is doing to where the limits of adhesion are.”

He puts it to good use, driving it on some of Scotland’s greatest roads, like the Applecross pass, near the Isle of Skye, and the North Coast 500.

“Cars are increasingly sanitised, and all the technology insulates drivers from what’s going on. Driving a car like the RX-7 puts you back in touch with the thrill of driving. It really puts a smile on my face.”

It’s not just the RX-7 that earns Samson’s praise. He says the Japanese car maker builds a wide range of cars that are great to drive, notably the MX-5, and admires the ‘defy convention’ attitude of the company.

What does the future hold for rotary power, in his eyes? “It’s not as easy to release a new car with rotary power now. I think Mazda has announced a concept for an electric car with a rotary motor acting as a range-extender. But as interesting as it is, that’s not the same thing to me.

“If it could make the engine more palatable to all the laws, I think it would be surprised at the feedback from the people who love driving. They would actually buy the car. I truly believe the piston engine can’t beat the rotary experience.”