by: Mazda Corporation in Uncategorized 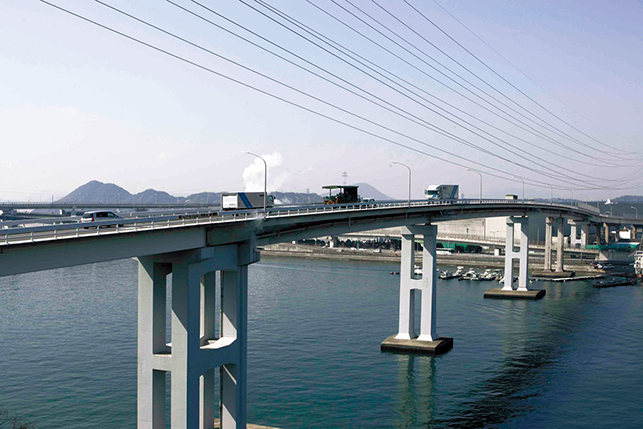 Hiroshima is not only known as the hometown of Mazda, but also as the city of flowing waters. Being built on six rivers, a lot of bridges are needed to make the citizens’ daily transportation possible. Also Mazda’s operations heavily depend on bridges. A large bridge, the Toyo Ohashi Bridge, is owned by Mazda.

Toyo Ohashi Bridge can be translated into ‘large orient bridge’. Its name goes back to the origins of Mazda, when the company was still called Toyo Cork Kogyo Co., Ltd, and later Toyo Kogyo Co. Ltd.

Since its opening in 1965, the bridge connects the headquarters area with the current Ujina plant area. State-of-the-art construction methodologies allowed to use the 560-meter bridge with about 25-meter difference for the transport of completed vehicles assembled in the headquarters plant and also to bring parts to the plants.

Until today, the Toyo Ohashi Bridge is essential for Mazda’s car manufacturing – and therefore loved by many Mazda employees as one of the landmarks at the headquarters. It’s the largest and longest bridge owned by a company in Japan.