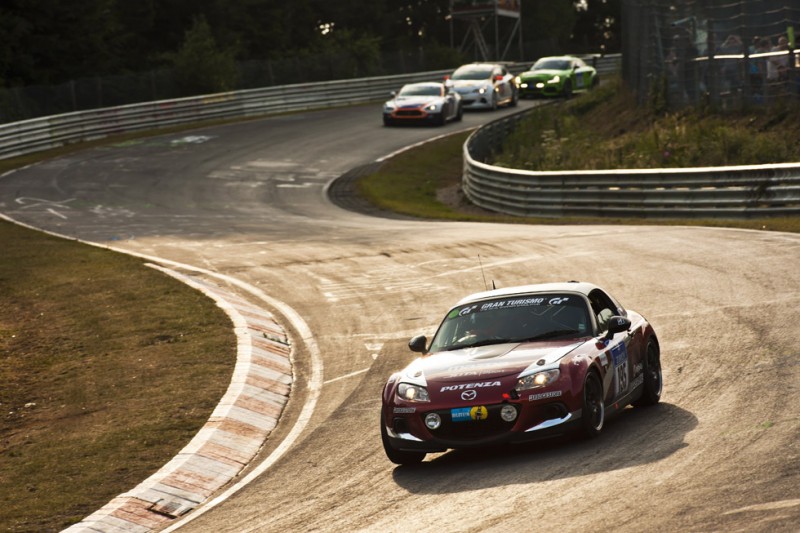 For Mazda the Nürburgring 24hr ended just before half distance. It was a disappointing end to an ultimately encouraging race.

The car crashed at 3.30am when Teruaki Kato made heavy contact with the crash barrier at the slowest part of the Nordschleife section of the track having missed his braking point in the dark. With minimal run-off area, the car had insufficient space to stop and ploughed straight on, the car’s crumple zone working to dissipate the energy from the crash and in a testament to the strength of the MX-5, Kato was unhurt.

The crash brought an impressive charge through the field to an end. Following an earlier accident, the MX-5 had lost more than an hour having repairs and dropped down to last in the V3 class. It had moved back up to 10th when Kato crashed. The Japanese driver said: “As soon as I went off the track, I hit the guard rail, spun and smashed the front of the car. It was a big impact.”

Team boss Sam Hignett said: “The good thing is none of our problems were down to reliability. The MX-5 was mechanically bullet proof. But you can’t engineer out the chance of impact damage and at some points it felt like every other car out there hit us. The car had two hits and both were quite big; no car could have survived those.

“After we rebuilt it following the first crash, the drivers said it was handling fine. And that was despite us changing three of the dampers. Normally you would do a few laps and tweak them to improve the handling. We didn’t have that luxury but the MX-5 is such a sweet handling car it was still fine to drive.”

Driver Wolfgang Kaufmann said: “I’ve been racing for a long time and I have never seen such a professional and motivated team as Jota. If they could have got the car running again, they would have.

Owen Mildenhall said: “It’s a shame. The car was so good but that’s what this race is like.”

For up to the minute progress, go to: www.24h-rennen.de/24h-live/einzelansicht/ranking/page/show/5/