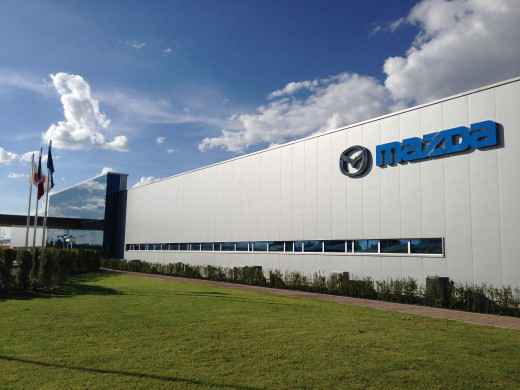 Mazda Motor Corporation today announced that production has begun at its new plant in Mexico. The plant, named Mazda de Mexico Vehicle Operation* (MMVO), is located in Salamanca, in the state of Guanajuato. The first model produced was the all-new Mazda3 sedan for the US market.

Regarding the commencement of production, Keishi Egawa, Mazda’s Managing Executive Officer in charge of New Emerging Market Operation (Latin America) and President and CEO of Mazda Motor Manufacturing de Mexico, S.A. de C.V. (Mazda de Mexico Vehicle Operation), said; “We have sent over 150 engineers and supervisors to Mazda’s plants in Hiroshima and Hofu, and made every effort to ensure that we are manufacturing products of the highest quality here at MMVO.”

“With the start of mass production, we now have a system capable of offering vehicles of the same high quality as those made in Japan, on a global scale, and that is extremely gratifying. We are committed to continue our efforts to contribute to the growth of Mexico’s economy through the production of vehicles and the development of personnel who support and lead the automobile industry here.”

Mazda has sold approximately 180,000 vehicles in Mexico since it entered the market in 2005. The brand is highly regarded, and in 2013 sold a record 33,000 units in the country. In addition to the USA, MMVO will produce the all-new Mazda3 for other countries in the Americas and for Europe. Moving forward, Mazda intends to strengthen its production system in Mexico and expand the production model line-up to include the Mazda2.

April: Takashi Yamanouchi, then Mazda’s Representative Director and Chairman of the Board, President and CEO, awarded the Order of the Aztec Eagle