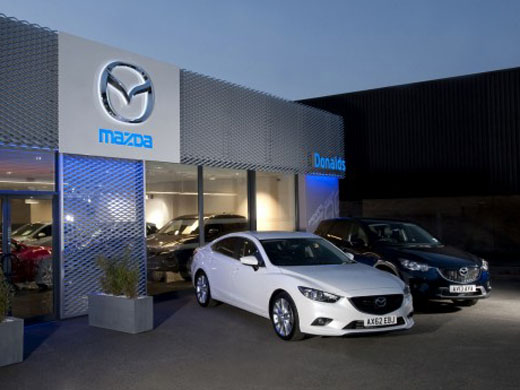 Mazda UK is pioneering a new look for the Europe-wide dealer network, with many of the ideas coming from members of the dealer forum in Britain and several non-car retail outlets including Apple stores influencing the new guise.

The new visual identity has been tested at Donalds Motor Group in Bury St Edmunds, Suffolk, where various permutations of layout, lighting, fixtures and fittings have been tried.

“It has kerb appeal just as our cars do and will make Mazda stand out in multi-franchise outlets with its premium, fresh and 21st century feel,” said Mazda UK Managing Director Jeremy Thomson. “From a customer point of view it leapfrogs the competition.”

Three new Mazda dealers, recently open for business or due to open in the next few weeks, will be among the first to sport the new brand identity. The new outlets are in Croydon, south London, Derby and Harrogate, Yorkshire.

“There is more interest in the brand today than we have open points and the biggest problem is lack of suitable properties, not lack of companies wanting to take on Mazda,” said Thomson.

“The focus has been on dealers being entrepreneurial about how to dress their showrooms, not us dictating,” said Thomson. “The new look, which will be rolled out across the network later this year, has been designed to be cost effective and flexible for dealers providing maximum impact without being too expensive,” he added.

“Dealers can choose different seating, desks and lighting. The flooring and desks that were introduced in 2004 remain the same if they want but all signage must conform to our new visual identity.”

This pragmatic approach fits with Mazda UK’s philosophy of making sure they remain a franchise of choice and one that “warrants serious consideration” said Thomson, pointing out that sales growth this year is on track to be up 20 percent, taking new car sales to 33,400 as a step on the way to 50,000 annual sales by 2015.

“Mazda is the ninth most searched for brand* on the internet. That is a clear measure of growth and our increasing number of awards for our SKYACTIV Mazda CX-5 and Mazda6 show a real sense of momentum,” he said.

Mazda CX-5 has just won Auto Express’s ‘Best Crossover’ award for the second year while Mazda6 was crowned ‘Best Family Car’ by the magazine – the seventh award it has received since going on sale in January.

The three new dealers who have joined or are joining the Mazda network are Drift Bridge Group in Croydon, Beechwood in Derby and Stoneacre in Harrogate.

Drift Bridge is a Surrey-based family firm adding Mazda to its well-established Volkswagen and Audi outlets that they have run since 1974. It is the first time in more than a decade that Mazda has been represented in Croydon.

Beechwood is another family firm which formerly held Subaru and MG franchises, while Stoneacre is a multi-franchise group with 29 national dealerships representing 12 brands.