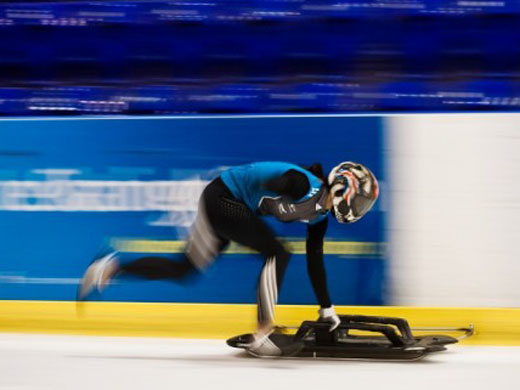 Sheffield based World Champion Skeleton bobsleigh racer Shelley Rudman, age 32, will be relying on the multi award-winning Mazda CX-5 for her gruelling training schedule in the build-up to the Winter Olympics at Sochi, southern Russia during February 2014.

Skeleton racing is not for the faint hearted, lying on a specially designed sled, the competitors travel down the ice track head first at over 80mph, negotiating 10 metre banked corners where their bodies are subjected to over 5G. The sleds are controlled through weight shift and contact with the concrete walls is not uncommon. It is in this demanding and unforgiving sport that Shelley has emerged as Britain’s best winter Olympian and the best in the world at Skeleton bobsleigh.

Over the course of a season Shelley will drive thousands of miles to train and compete, requiring a stylish, comfortable and functional vehicle to transport race sleds, associated equipment and her family which includes young daughter Ella. Shelley drove the Mazda CX-5 last season and found the car ideal for her needs.

“The Mazda CX-5 is the perfect car,” commented Shelley. “It swallows kit and luggage, it is comfortable for those long journeys and is incredibly economical with the SKYACTIV technology. During the year I am either training, travelling or racing and it is good to have a car that I know will be reliable in the sub-zero temperatures, can be loaded quickly when it is really cold and will get us through the toughest of roads in the mountains. The Mazda CX-5 is also ideal as a family vehicle off season, and was brilliant in extreme heat when we travelled in it to the south of Spain”

Shelley Rudman shot to fame at the 2006 Winter Olympics in Turin, Italy by winning the Silver medal in the Skeleton bobsleigh event. The medal was the first and only medal to be won at the 2006 Games by a British athlete.

Since Turin, Shelley has maintained her winning form and captained the British Olympic team at the Vancouver games in 2010. In 2009 and 2010 Shelley was the silver medallist in the Skeleton World Cup, she turned this into a gold medal in 2012 and became World Champion earlier this year – the first British woman ever to do so.

Commenting on the 2013 season Shelley said: “This season I was targeting the World Championships at the end of the season in St Moritz, Switzerland. It had been a two year goal – to attempt winning a medal on my favourite track in the world, and one where the birth of our sport took place as an incredible achievement.”

“After suffering a hamstring injury, chest infection, and flu, the season wasn’t the best one I’ve ever had, but there were some great result highlights. In Germany, I won the Winterberg World Cup race and set a new track record.”

“But, my best achievement so far was winning the World Championship title earlier this year and being the first British woman to do so. I did everything possible to be in the right frame of mind and physical shape to race well over two days and it finally all came together,“ added Shelley.

Shelley is now training for selection for the British team at the Winter Olympics where she hopes to represent Great Britain for the third time, aiming to once again beat the world to the prize most athletes covet more than any other.

Jeremy Thomson, Mazda UK managing director, commented: “Shelley Rudman personifies our brand, she is a real challenger. Despite the fact we live on an island that is not renowned for our winter sports Shelley has excelled and beaten the world at one of the most extreme and challenging winter sports. The technology and research that goes into the sled is phenomenal and reflects our own pursuit of environmentally friendly, lightweight solutions to personal transport. We are looking forward to cheering her on next year as she takes to the track in Sochi.”