Mazda3 Hiroshima to Frankfurt – Stage One 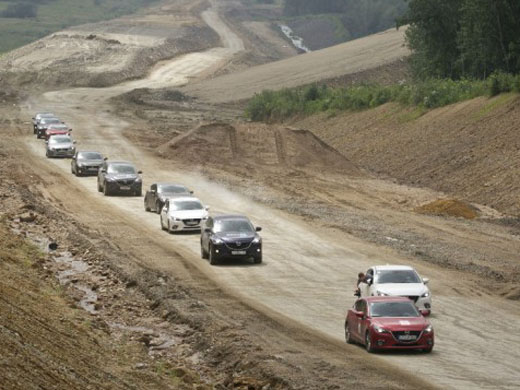 Russia, or more specifically Siberia, is not on many people’s destination of choice, it is not renowned for its party lifestyle, world class cuisine or glorious beaches and resort hotels.

It is, however, known for being the place that anti-Government activists and rebellious intellectuals were sent as a punishment under the communist rulers and many Youtube videos show a standard of driving that would put off the most confident of drivers.

We arrived into Vladivostok on Friday 2nd August, bleary eyed and tired from a journey that had involved three flights, Heathrow to Frankfurt, then on to Moscow and finally a 7 hour 45 minute flight to Vladivostok.

The Mazda3s had arrived fresh from the factory the previous week, only clearing customs on Thursday, this only gave the local Mazda dealer the chance to run a PDI check and sign them off as fit for the drive, a drive that would take the cars 9,300 miles across some of the most pot holed roads in the world with no special preparation. 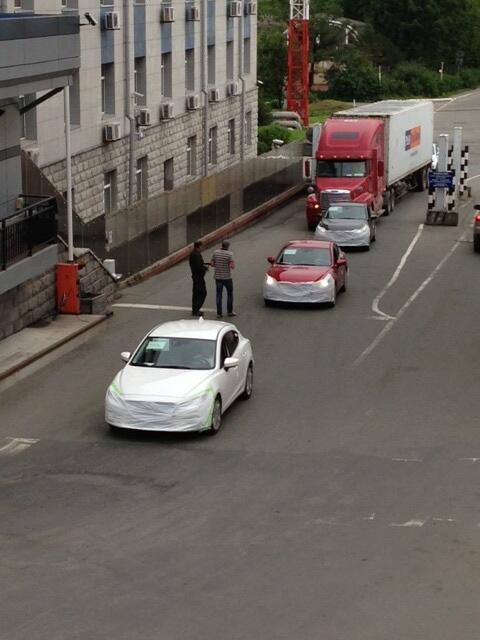 Based on the south eastern tip of Russia, Vladivostok is the home to the Russian Pacific fleet and is a military town, the houses and hotels are functional rather than comfortable and the food is traditional Russian.  You do not find many ex-pats living and working here.  While Lada holds a strong 40% of the Russian market Vladivostok is very different, it is closer to Japan than Moscow so 90% of the cars are right hand drive imports from Japan, leading to a very eclectic mix of Japanese cars.

Russia is growing in importance for the motor industry and since 1996 has held an international motorshow every two years, with car ownership being an expression of wealth and success that is now accessible to all levels of the proletariat.

Russia is a big market for Mazda and has a lot of volume potential which will be partially met through local production. This potential is not lost on the dealer franchise in Russia, one Moscow dealer sells 20,000 cars a year across the 17 brands he represents, all 17 brands sit on a single site which the result of a €120 million investment back in 2007.

Along the way we will see cars hitched together heading towards Moscow, these are imports that dealers have picked up in Vladivostok and taking to Moscow where they can make a substantial profit.

Mazda imports its cars into Vladivostok before putting them onto the trans-Siberian railway for distribution throughout Russia.  The trans-Siberian railway is the longest in the world spanning over 5,000 miles and connecting Moscow to all of Russia and extending into China, it is an impressive rail network that travels through some stunning wilderness.

I have travelled to Russia on a number of occasions in the past, mostly to Moscow but also to St Petersburg and Kaliningrad and have always been struck by the overt displays of wealth in Moscow and the beauty of the architecture in St Petersburg contrasted with the urban decay found in Kaliningrad.  Moscow is run by the Oligarchs where wealth and power is everything, but Siberia has a proud heritage in agriculture and heavy industry and is a stark contrast to the designer stores and stylish hotels and restaurants found in the capital city.

We set off on Saturday August 3rd, the first day was 388km.  Before long it became apparent that the roads were not going to sustain high speed travel, pot holes were of a size that not only put your wheels at risk but could seriously damage other parts of the car as you disappeared into them.  The Mazda3 has a heads up display that allows you to read off your speed as well as route directions from the satnav without taking your eyes off the road and this proved valuable in monitoring your speed and directions while keeping a careful eye on the road surface conditions. 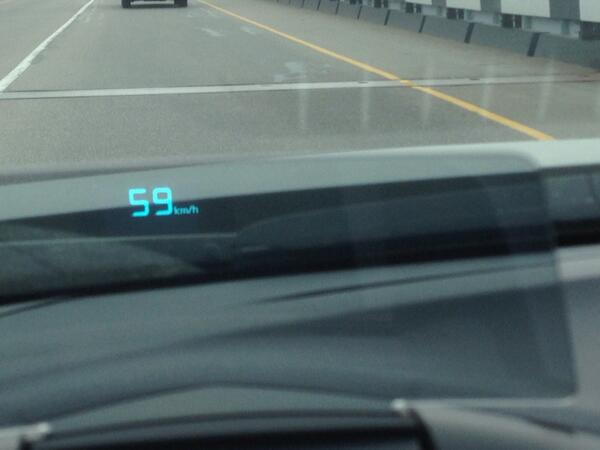 We also encountered long sections of unpaved roads where stones were a real issue for windscreens, here impatient drivers pushed into oncoming traffic to speed ahead.  Some of the driving we saw on that first day was frightening. 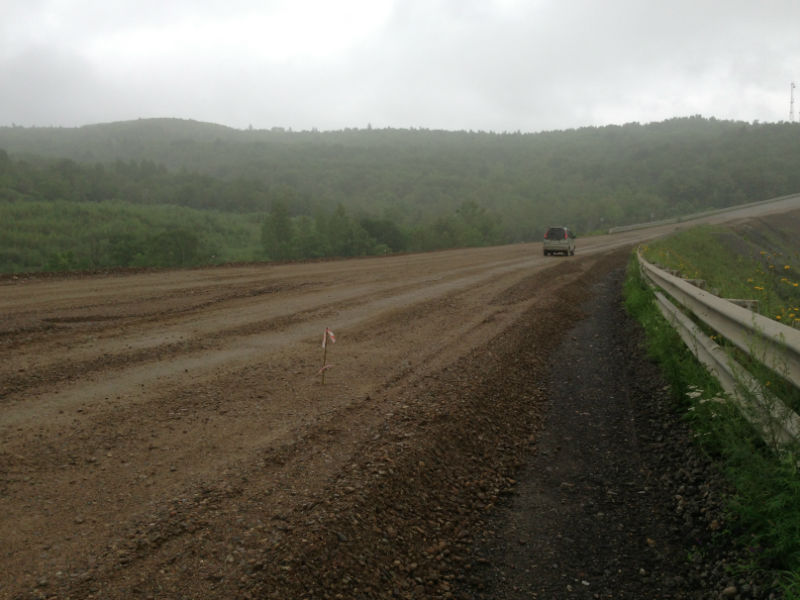 We pulled into our night stop in Dalnerechensk late afternoon having taken eight hours to drive the 388km, our fuel consumption is a respectable 42mpg in our 2.0-litre petrol, 120ps hatchback. Dinner that night was an interesting culinary experience, somewhat marred by the restaurant running out of beer after the first round. Many towns on the route are unchanged from the Soviet era with poor building standards and little investment, a real contrast to the opulence of the building investment in Moscow

The following morning we left at 0830 for a 507km drive to Birobidzhan, this included crossing the Amur bridge, famed for being featured on the 5,000 Ruble note.  It is here that we change direction, until now we had been driving north-east and further away from Frankfurt as the crow flies, now we turn west to follow the Chinese border and each mile now takes us closer to our destination.  Eleven hours of hard concentration later and we pull into the town.  Sitting by the river, this is a picturesque place proud of its heritage, in the square is a 30ft statue of Lenin, one of the great icons of the Soviet Union. Average speed increased and fuel consumption is now 41mpg. 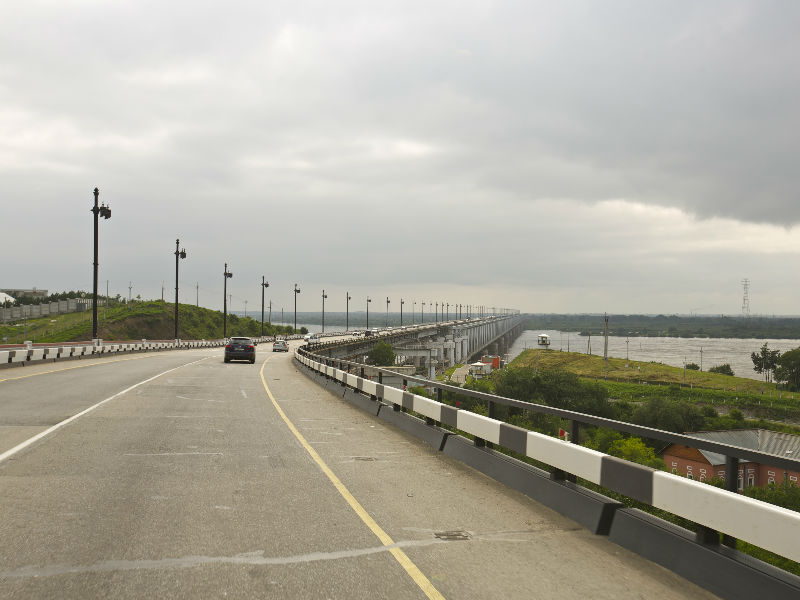 Day three, 511km to Blagoveshchensk, we have left the convoy and are making good progress through the Siberian mountains, this is the home to the Siberian tiger and Siberian bear.  The scenery has changed from the plains to spectacular forested mountains.  Russia accounts for one seventh of the world’s land mass and over 25 percent of the world’s forest. 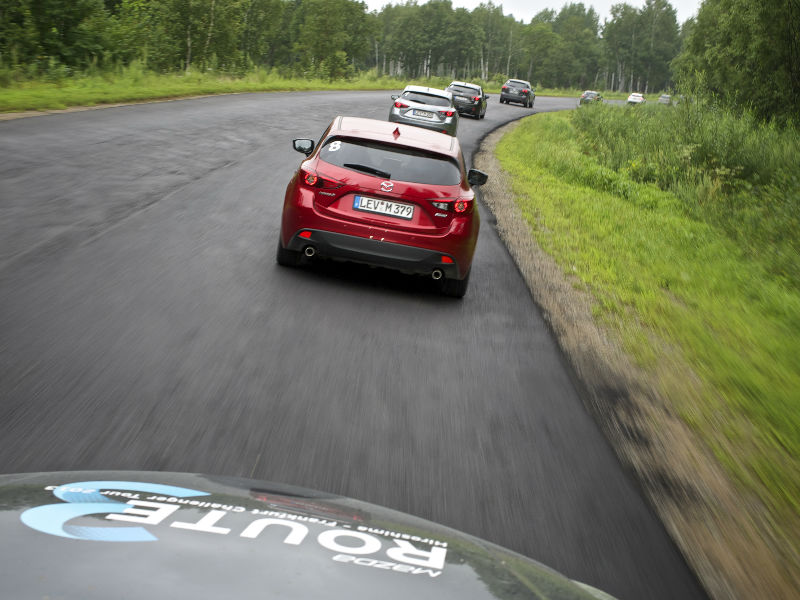 We stop for lunch at a roadside café, it is on a junction and denotes a time line.  We approach the café at 1400 and pull into the car park at 1300 – who says you cannot time travel – this is the first of nine time zones that the drive will pass through.

One interesting feature of the trans-Siberian highway is the regular vehicle ramps by the side of the road, the road conditions are so bad and towns so infrequent that the highway agency has placed vehicle ramps every 50km for people to repair their cars enroute.

We pull into Blagoveshchensk at 1800, we have been driving hard for the whole day and our average speed has increased considerably with fuel consumption at a very impressive 40mpg.

Blagovenshchensk sits on the Chinese border, separated by the river Amur which denotes the Russian Chinese border all the way to the Japanese sea in the south east.  Here the river is just 800 metres wide and the city is obviously a tourist destination for the Chinese with road and hotel signs in both Russian and Chinese. 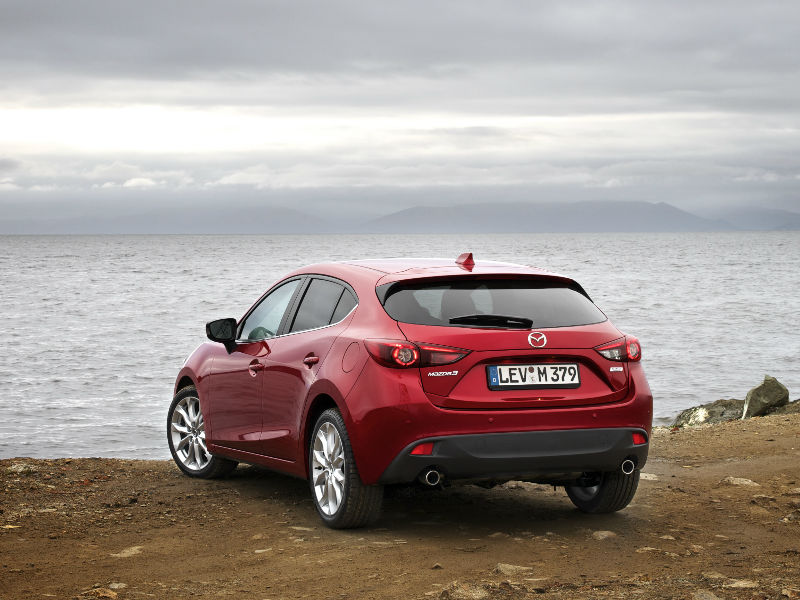 The Mazda3 has been outstanding, taking all the road surfaces in its stride and carrying us 1500km in air conditioned comfort.  Siberia has grown on me, it is a place of spectacular scenery and friendly and warm people.  The downsides remain the lack of good roads or substantial investment in improving the standard of building.  So much of the area shows considerable urban decay and buildings that should probably have been condemned some time ago.  However, there is evidence of better housing being constructed, roads being resurfaced and airports improving their routes and facilities, maybe it will become a holiday destination of choice in the future.

The following day we hand over the baton to the next group and board the Air Vladivostok Russian Tupolev for a seven and half hour flight back to Moscow.  We arrive back in London after 23 hours of travelling for three days at home before returning to Ulan Ude and stage three.