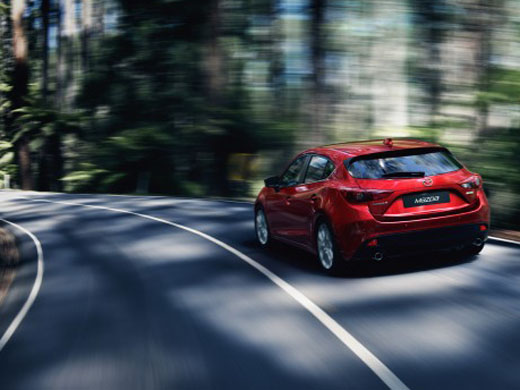 Mazda has long been famed for the robust quality and reliability of its vehicles and the all-new Mazda3 builds on those key attributes.  To prove just how good its new model is, Mazda is sending eight of its new compact hatchbacks on an unconventional test drive – travelling more than 9,300 miles from the factory in Hiroshima to the 2013 International Motor Show in Frankfurt, Germany.

The ‘Mazda Route3 – Hiroshima to Frankfurt Challenger Tour 2013’ crosses nine time zones, five countries and two continents, traversing Russia (the world’s largest country), before crossing Belarus and Poland.  Driven by journalists, bloggers and Mazda dealers, the convoy of new Mazda3 cars will arrive in Frankfurt on Saturday 7 September, three days before the motor show opens its doors.  Mazda fans can follow the convoy’s progress on a dedicated website available at www.mazda.co.uk/mazdaroute3/ which will feature a trip diary with images and videos.

After taking a ferry across the Sea of Japan, the main overland portion of the Mazda Route3 endurance test drive begins in Vladivostok, Russia’s main Pacific port, on 3 August. British media and Mazda dealers from the UK will be among the first crews to pilot the Mazda3 test fleet when they participate in the three legs from Vladivostok to Krasnoyars, via Blagoveshensk and Ulan-Ude.

Averaging just over 1,300 miles, the seven ensuing legs of the tour will take between three and six days each to cover. The endurance test will provide ample opportunity for those behind the wheel – journalists and Mazda enthusiasts from various parts of the world – to become well acquainted with the all-new Mazda3 under a variety of conditions. There will also be several opportunities along the way to experience different cultures and customs.

All the Mazda3 hatchback test cars will be powered by a 120ps SKYACTIV-G petrol engine mated to a six-speed SKYACTIV-MT manual transmission.  From the stunning ‘KODO – Soul of Motion’ exterior design to the advanced lightweight SKYACTIV technology and a completely redesigned cabin space, the convention-defying all-new Mazda3 is built to exceed customer expectations.

Enhancing traditional Mazda strengths, the new Mazda3 delivers uncompromising handling, safety and build quality. In the UK, there will be a choice of two bodystyles (hatchback and fastback), three SKYACTIV-G petrol engines and one SKYACTIV-D diesel – all offering an unbeatable combination of performance, fuel economy and low emissions that should place the all-new Mazda3 among the best in Europe’s C-segment.

This will be the third time that Mazda models have taken part in such an extreme test drive.  In 1977, German reporters drove two predecessors of the Mazda3 – Mazda 323 hatchbacks – from Japan to Frankfurt.  The expedition was followed up successfully in 1990, when four Mazda 626s crossed the former Soviet Union.  Now the stage is set for the most advanced Mazda compact ever to follow in their tracks.