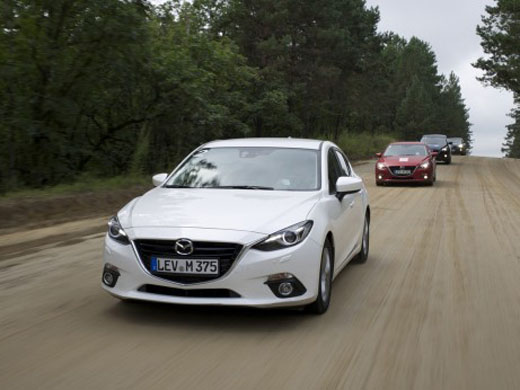 On Tuesday 6th August, like an extreme relay race, I meet Graeme Fudge, UK PR Director in the remote airport of a city I had never heard of – Blagoveshchensk in the far east of Siberia. After spending 24 hours and three flights getting there, I was looking forward to driving the all-new Mazda3. The food on the planes was laughably poor and little did I realise that unfortunately it was a warning of what was to come – chunky stewardesses demanding to know if you wanted “chicken or meat” and rather bland and unappetising meals. Anyway – I arrived safely if tired with eight guests: two UK journalists, two Irish journalists, two bloggers and two UK Mazda dealers. 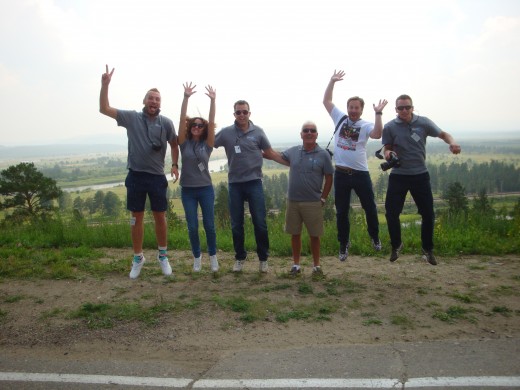 From the airport we set off to the hotel and enjoyed a sight-seeing trip on route which involved standing on the Armur riverbank looking at the bright lights of China just 800 yards away. You could see the brash and colourful buildings and tourist attractions that seemed to be an invitation to venture across for Siberian locals and a bold statement of China’s strength and confidence in the age-old battle for supremacy by these two super-powers.

The next morning, Wednesday 7th August, we started the second leg of this amazing journey from Blagoveshensk to Ulan-Ude in an all-new Mazda3 – covering 2,300km in just three days and initially following the route of the Trans-Siberian Railway through huge, seemingly unending, pine and silver birch forests. Taking the train to Moscow would be a marathon 152 hour journey from here which gives a sense of the scale of the country. The roads are tarmacked here and have been recently improved but it is hard to understand how; at irregular intervals the whole road subsides and leaves a substantial dip which the car sinks into and bounces out of. At slow speeds it is fine but as parts of this route are dual carriageway, hitting one at 60mph compresses the car to the suspension stops and pings it out again at speed with passengers held into their seats by their seatbelts. When you hit a series of these, there is a comical line of Mazda3 cars dipping and diving as though it was a roller-coaster train at full pelt. A lesser car would make such maneuvers very dangerous but the all-new Mazda3 really took it in its stride; the chassis set-up is definitely a highlight of the new SKYACTIV technology and it gives a hugely reassuring but also sporty feel. 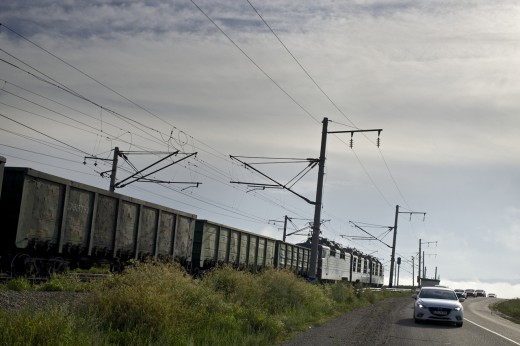 Our convoy of eight all new Mazda3 cars and five Mazda support vehicles makes a highly unusual sight for the locals who rarely see tourists in such a bleak and obscure location and late that afternoon we roll into Skovorodino and check in at the only hotel in town. I am reading a book called “In Siberia” by Colin Thubron (which I recommend for a fascinating insight to the Siberian way of life and their background and culture). In it Colin describes arriving in the same town ten years ago: “A sleepy youth blinked wordlessly at my documents, then found me a bed under a wall spattered with mosquitos. I turned the soiled mattress and slept.” It is probably the same place and I’m afraid it hasn’t changed… I had a room with no windows and given the very humid summer weather it was unbearably hot. I cunningly turned the large empty fridge freezer on and opened the doors in an attempt to create a rudimentary air conditioning, but at 4am woke in a claustrophobic sweat at the room reached 90 degrees as the hugely inefficient (broken) fridge motor acted as a heater rather than a cooler. Oh well…. 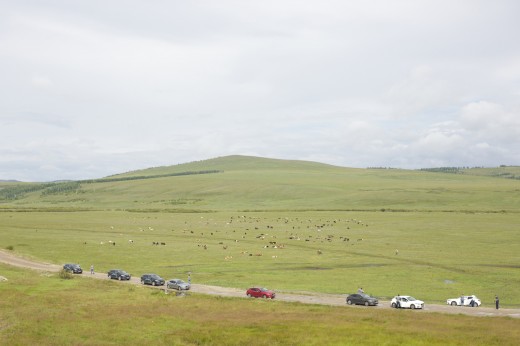 The next day (Thursday 8th August), breakfast consisted of eggs fried with chopped spam in lots of oil and a local version of coke that tastes like diesel, and then into the Mazda3 again for the longest section of the journey, a 750km trip to the regional hub of Chita. The roads remained reasonably drivable but with fewer unexpected waves of collapsed surfaces and allowed a few stints of high speed driving that demonstrated that the car has great pace, even with the lower-powered version of the 2.0-litre petrol 120ps engine that was fitted in these first cars off the production line. The increased power of the 165ps petrol version and the strong torque of the 2.2-litre diesel model will be great to experience when they arrive in the UK at the end of the year. 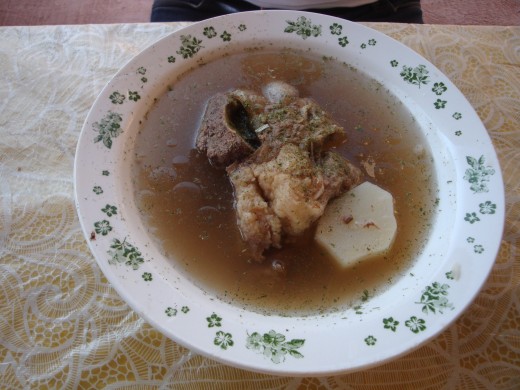 The third and final day (Friday 10th August) of driving saw the views transformed from endless forests to the most stunning and continuously changing prairie land that was reminiscent of African, Canadian and Austrian countryside with huge skies and uninterrupted views. It really was beautiful but full attention was required on the roads which had deteriorated from reasonably smooth surfaces to huge potholed tracks. The lead car was constantly on the walkie-talkies warning of major road damage ahead and urging us to slow down but there was a tendency to drive briskly as the teams got to really enjoy the driving capability of the Mazda3 cars – the nimble steering and firm brakes really came into their own on this section. Nevertheless, my car was unlucky and we hit a particularly nasty hole on a blind corner at speed and put big dents in two alloy wheels. Luckily, the support cars had spares and within 10 minutes we were on our way again, and driver Neil “Pothole” Perrin, a Mazda dealer, got plenty of helpful and supportive comments from the rest of us! 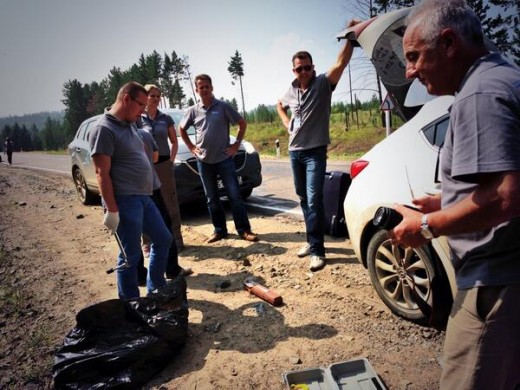 Our car, a stunning metallic white, was now a fetching brown from the accumulation of dust and mud, but still looked the part. And travelling with three people on board the improved interior space and cabin quality was greatly appreciated. This car is the same length as the outgoing model, but 40mm wider, 15mm lower and has a 60mm longer wheel-base so the use of space is outstanding and accommodation for rear seat passengers is exceptional for this class of car – I am 6ft tall and spent long hours in the back on bumpy roads, arriving fresh and comfortable. 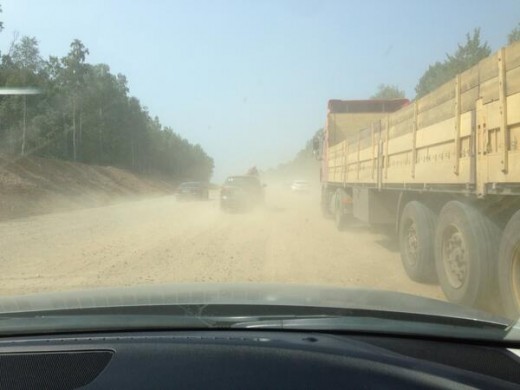 The final day concluded with a stop in Petrovsky-Zaboykalskly to visit a museum dedicated to the exiled Decembrists, army officers who led a revolt in 1825 and were sent to work in hard labour camps in this area and the houses where their wives who followed them lived still remain. Another couple of hours took us to our final destination of Ulan-Ude, a large town by the beautiful Baikal Lake – the oldest and deepest lake in the world and home to unique and ancient varieties of fish (some of which we later ate). It holds 20 percent of the world’s unfrozen surface freshwater and is a whopping 5,400 feet deep. We spent a short time at a local beauty spot where newly married couples come for photographs against the stunning backdrop scenery. 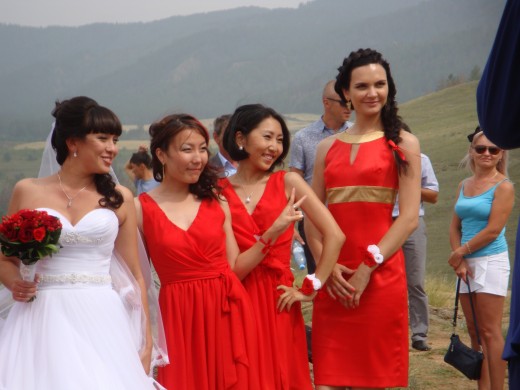 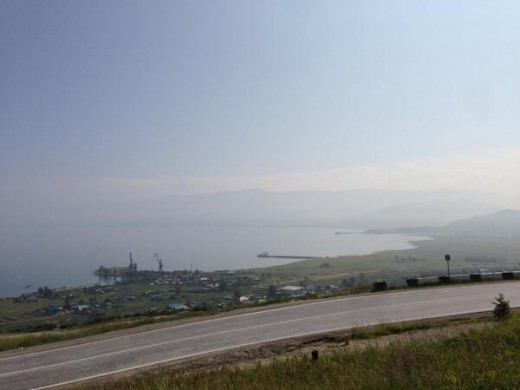 The fourth and final day (Saturday 10th August) in Siberia was an opportunity to understand a little more about the local people and the influences that have come from Mongolia (just across the border) and China, and their religions and beliefs. We visited the Ivolginsky Datsan Temple which was founded in 1946 and is the spiritual centre of Buddhism in Russia and which represents a significant influence in this part of the country. The complex was a fascinating insight to this branch of the religion and included a rare opportunity to visit a most unusual and very sombre shrine which included the preserved body of the last Lama (priest) sat in the lotus position in a glass case and apparently defying the natural decomposition. A little unnerving but a privilege to be permitted to be part of this with other pilgrims who made long journeys to visit and receive a blessing from his presence. 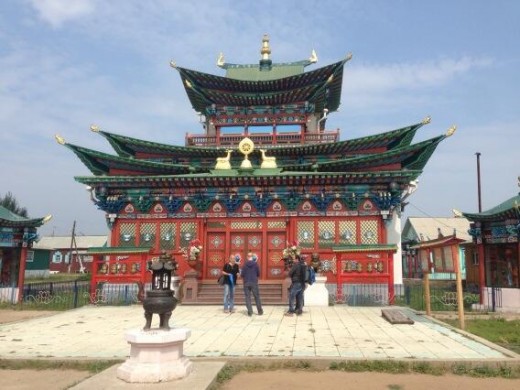 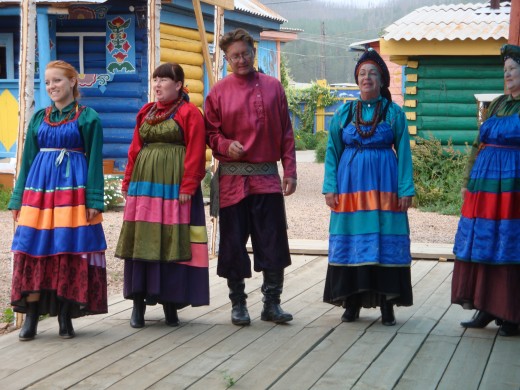 Then on to the Old Believers’ village of Desyatnikovo, a compound of brightly painted 250 year-old wooden houses where people who still live by the old country ways showed us something of their lives, music and food, concluding with a demonstration of various folk songs. The family have travelled all over the world singing these old songs that keep their culture alive. Back to Ulan-Ude for a final celebratory dinner in a Mongolian restaurant.

After tackling the Russian flights back home – I felt exhausted but exhilarated and full of admiration for the all-new Mazda3 and it’s incredible durability on some of the most challenging roads we have ever experienced.

As we left, Graeme Fudge appeared at the airport to support the third leg of this amazing journey – and with some regret I passed the baton back to him.

Watch the participants as they drive the 2,300km drama-filled route from Blagoveshchensk to Ulan-Ude: http://www.youtube.com/watch?v=FNJyUPcJ6u4&list=PLoexgVa4CACGNbLlRUq7LcML8ARJBRuhP