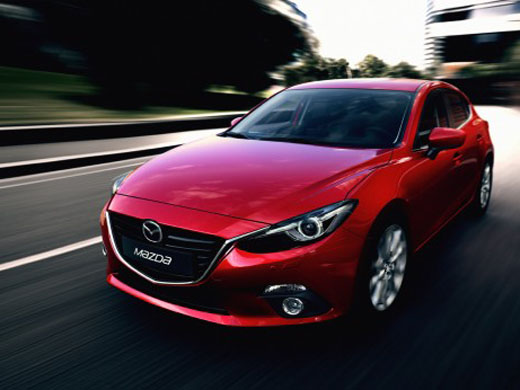 London, Istanbul and St. Petersburg were chosen (along with New York and Melbourne) for their insightful, spirited and stylish character, which nicely mirrors the properties of its new five-door compact. Mazda’s top-selling model of all time becomes the third member of a new generation featuring the automaker’s “KODO – Soul of Motion” design and its full range of convention-defying SKYACTIV Technology. The new Mazda3 thereby joins its award-winning siblings: the Mazda CX-5, a compact SUV launched in 2012, and the mid-sized Mazda6.

Consisting of lightweight engines, transmissions, body and chassis, SKYACTIV Technology was developed by Mazda from the ground up as the basis for ultra-efficient vehicles. It has also helped put Mazda back on track as a business. The improvements achieved through SKYACTIV innovation have considerably enhanced the efficiency of its manufacturing and development processes.

“Everything about the all-new Mazda3 is exciting, from the way it looks and feels to its dynamic performance, nimble responsiveness, reliability and operating costs,” says Mazda Motor Europe President and CEO Jeff Guyton. “We already have big expectations for this model’s success in terms of sales, but I suspect it may even surprise us.”

The new compact, which makes up almost one-third of Mazda’s global sales, is a vital part of company plans. Already the target of well over 130 awards since first launched in 2003, Mazda was looking to again raise the bar for this key passenger car segment. In addition to KODO styling, the new Mazda3 features an interior that was completely redesigned for maximum comfort and superb usability. The company even offers an in-vehicle connectivity concept for its new model. Featuring AhaTM radio, among other things, it’s one of the first cars in the C segment to take occupants online.

The new Mazda3 is also the latest model developed according to Sustainable Zoom-Zoom, Mazda’s strategy to build fuel-efficient and safe cars that are still remarkably fun to drive. It is therefore available with i-stop, the world’s fastest idle-stop system, and i-ELOOP, Mazda’s brake energy regeneration system. Performance, meanwhile, is impressive thanks to the all-new engines and transmissions. And with a number of other SKYACTIV innovations adapted to the smaller, leaner packaging of the compact Mazda3, it’s got the handling to match and should be one of the safest compacts available when it goes on sale in Europe this fall.