With its stunning KODO lines, the new Mazda6 will be a key feature at this year’s Milan Design Week 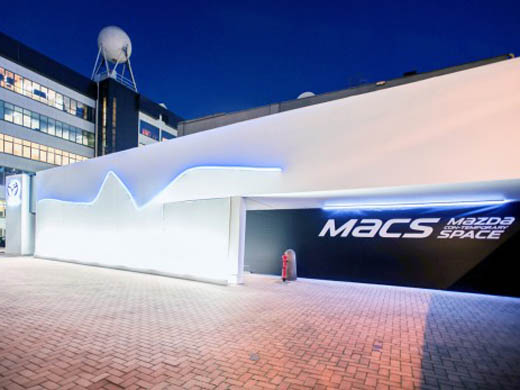 Design is clearly a central element of Mazda’s convention-defying approach to creating cars.  To celebrate Mazda’s dedication to functional beauty, as demonstrated by the award-winning ‘KODO – Soul of Motion’ design theme of its new generation of cars, Mazda is taking part in Milan Design Week 2013 from 9-14 April.  The all-new Mazda6, with its stunning KODO lines, will be one of the key features at the Mazda display in a special venue in the Italian metropolis.

Located in Milan’s stylish Zona Tortona district, Mazda Con-Temporary Space (MACS) was conceived as a cultural forum to present contemporary art and design in a variety of forms.  Since opening in January, MACS has featured various public exhibitions by Italian artists with ‘movement’ and ‘soul of motion’ as their central themes.  The new Mazda6 flagship saloon has been a permanent fixture at MACS throughout the exhibition period, which will continue until late April.

During Milan Design Week, MACS will host the exhibition Forma Fluens by Giuliana Cunéaz.  Designed specifically for MACS, this exhibition uses 3D and HD video installations as well as painted screens, sculptures, photographs and drawings to take the viewer on a fascinating virtual journey through a metamorphic landscape exploring nanotechnology and other forms of science.

“My desire to delve into and capture these types of dynamic transformation processes has much in common with the Mazda approach, which goes beyond merely designing cars,” says Cunéaz.  “It’s about using the KODO theme to create models where aesthetics and technology are united into an overall design that achieves new levels of harmony and emotion.”

Milan Design Week gives artists, companies and other organisations a prime opportunity to present their design work and installations at locations of their choice throughout the city.  It evolved out of the ‘Salone del Mobile’, an annual furniture fair held since 1961.  The largest event of its kind in the world, the Salone currently attracts some 2,500 exhibitors and around 300,000 visitors to the Milan fairgrounds.

Developed under the guidance of Ikuo Maeda, Mazda’s head of design, the prize-winning ‘KODO – Soul of Motion’ design theme was inspired by the instantaneous movements of animals in the wild.  KODO represents the ultimate form of motion, brimming with energy and emotion, and symbolises Mazda’s devotion to building stunningly fashioned, yet exceptionally practical and refreshingly driver-oriented vehicles.  So far, honours bestowed for KODO include Auto Bild’s 2012 European Design Award for the Mazda CX-5 compact SUV, the first KODO production model.  The Mazda Takeri, which served as the basis for the all-new Mazda6, also took first place at the German Design Council’s Automotive Brand Contest 2012 in the concept car category.