by: Mazda UK in Competitions, Mazda and you 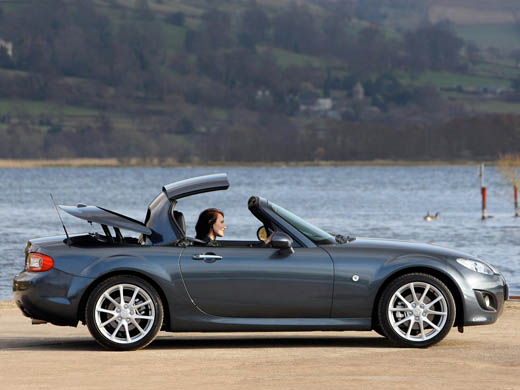 What can you do in 12 seconds? It was the Paralympics T46 100m barrier broken at London 2012 by Cuban sprinter Yunidis Castillo with a world record of 11.95 seconds. The composer Robert Smith chose it for Twelve Seconds to the Moon to celebrate man’s conquest of the skies. And it’s the time it takes to open the retractable hard-top on the Mazda MX-5.

But can a Mazda MX-5 perform four donuts in 12 seconds?

That’s one of the questions that will be answered this month as Mazda Motors UK kicks off a series of engaging Facebook videos which will run throughout September.

The competition, with numerous prizes, involves six 12-second challenges and entrants have to guess whether the challenge will be completed in the time it takes for the MX-5 retractable hard-top to open.

The film of each challenge will be posted on Mazda UK’s Facebook page www.facebook.com/MazdaUK and the Facebook community will be posed the question via a Facebook update, accompanied by the video. Those who enter will have to guess whether the challenge has succeeded or failed and send their answers by email to: competitions@mazda.co.uk.

The action takes place between the sixth and seventh rounds of the Avon Tyres British GT Championship where Mazda UK and Jota Sport compete its Mazda MX-5 GT4 race car. The final race is at Donington Park on the weekend of September 29-30.

The 12-second challenges are:

Prizes for each challenge include the chance to go Zorbing (the sport of rolling inside a transparent plastic orb) or Microlighting with a grand prize, for the person selected at random from all entrants that guess a challenge correctly, of a week’s loan of a Mazda MX-5 as well as swimming with sharks.