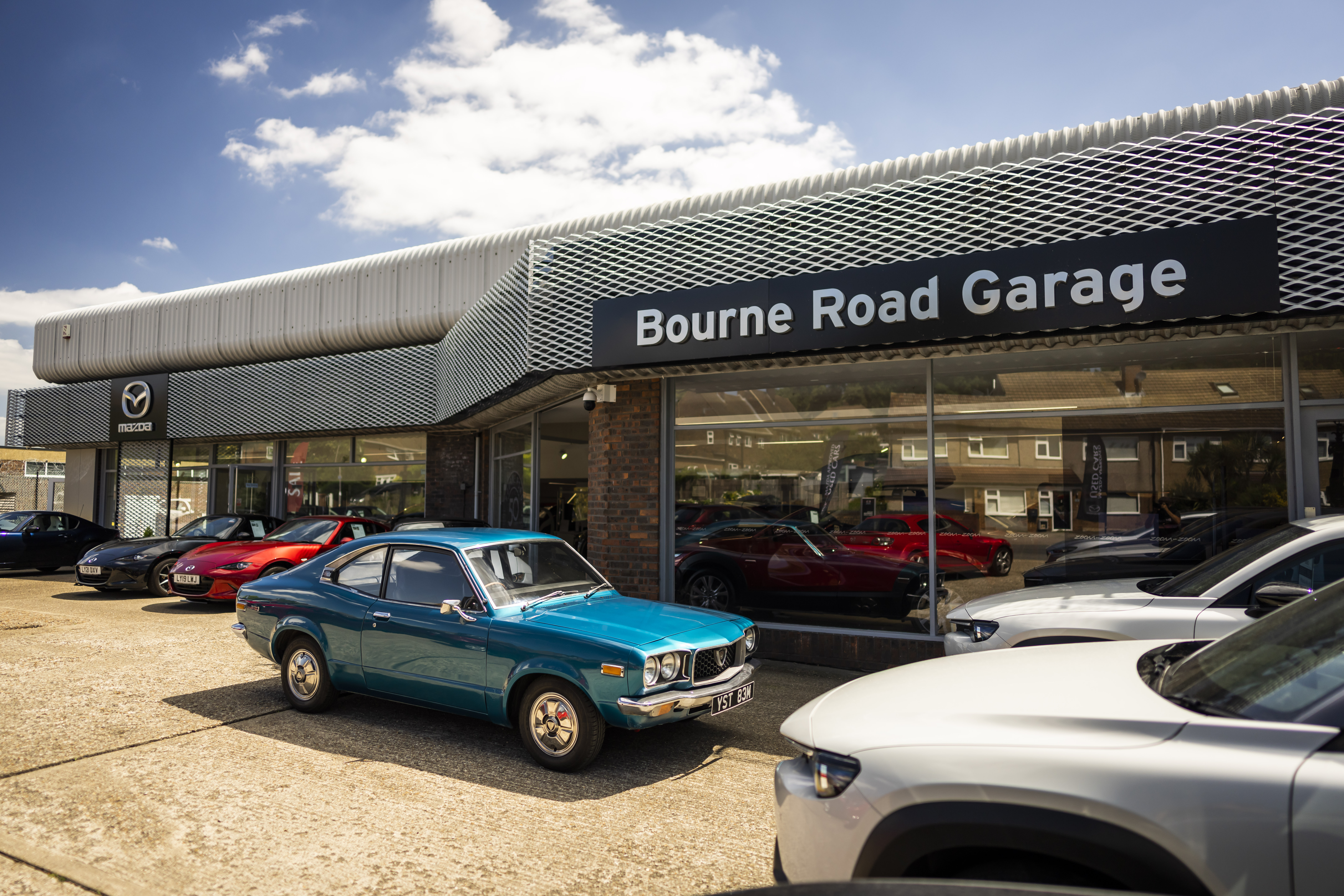 Mazda’s story in the UK started on a relatively small scale with the brand launching at the 1969 British Motorshow but it was not until 1972 that sales started in earnest. Today, very few dealers are able to claim they were part of Mazda’s story in the UK from the start, but Bourne Road Mazda in Crayford, Kent has been part of the Mazda dealer network since the very beginning.

Celebrating their 50th anniversary as a Mazda franchise, Bourne Road Garage started selling Mazda cars in 1972 from the very same site they occupy today. However, the story of this still family owned business pre-dates Mazda with Edwin Henry Braddon, grandfather of present owner Peter, buying the site on Bourne Road in Crayford on the 1st April 1938 for his haulage and engineering business. By the 1960s the operation had moved to car retailing, workshop and fuel station, and after a brief flirtation with selling Ford and Datsun products, became a Mazda dealer in 1972.

A dealer throughout Mazda’s growth in the 1980s and 1990s, when Mazda importer MCL Group Ltd opened its new headquarters building in Tunbridge Wells in 1982 in was Bourne Road owner Peter Braddon who was invited to cut the ribbon. When Mazda UK Ltd was established in 2001, Bourne Road continued as a dealer and today this third generation family-run dealership has built a reputation for delivering first-class customer service in Crayford, which is continually reflected by outstanding customer satisfaction and Feefo ratings. In addition, the dealership’s family run feel is further highlighted by high-levels of staff retention and long service – over a third of the employees have been at the garage for more than 20 years.

Andrew Mooresmith, Managing Director at Bourne Road Garages, has worked at the garage for the last 42 years. He commented: “you’ve got to keep doing what you do best”, adding, “we have a family business culture and we have many wonderful loyal customers who come back because of the service we provide”

Having presented a commemorative plaque to Andrew, Jeremy Thomson, Managing Director at Mazda UK, said: “It’s an absolute pleasure to be at Bourne Road Garage and to recognise the hard work, dedication and commitment demonstrated by Andrew Mooresmith and the team over the last five decades. The industry has significantly changed in the last 50 years, but with the dedicated team at Bourne Road combined with the exciting Mazda vehicles on offer, the dealership has been an integral part of our success in the UK.”

Bourne Road Mazda, Sales Manager, Garth Vincer, a 22-year veteran at the garage, commented that: “it’s the focus on people – both staff and customers that has been key to our success over the last five decades. Adding, “we have a customer who has been with the dealership for the last 40 years and customers who still come to us for servicing in spite of moving hundreds of miles away, and I think the key to this is making the car buying process easy, we don’t put people under pressure we give customers choice and let it flow. We empower all our sales staff to make decisions so that the customers get personal service, and this focus on customer care extends to servicing and parts, too”.

A long-server supporter of the local rotary club and their charity activities, Bourne Road Garage has also been active in the local community in Crayford and the Borough of Bexley for decades, the dealership site even features a pair of listed lampposts that the business saved from the scrap when a local theatre was demolished in the 1960s.

With half a century of experience selling and servicing Mazdas, Bourne Road Garage has seen all of the key Mazda product milestones over the last five decades, from day one selling rotary rarities like the Mazda RX-3 to sports cars like the RX-7 and MX-5, to selling family favourites like the 323 and the launch of landmark cars like the Mazda CX-5. And now Bourne Road Garage is ready for the launch of the all-new Mazda CX-60 PHEV, which arrives in the dealership in September.