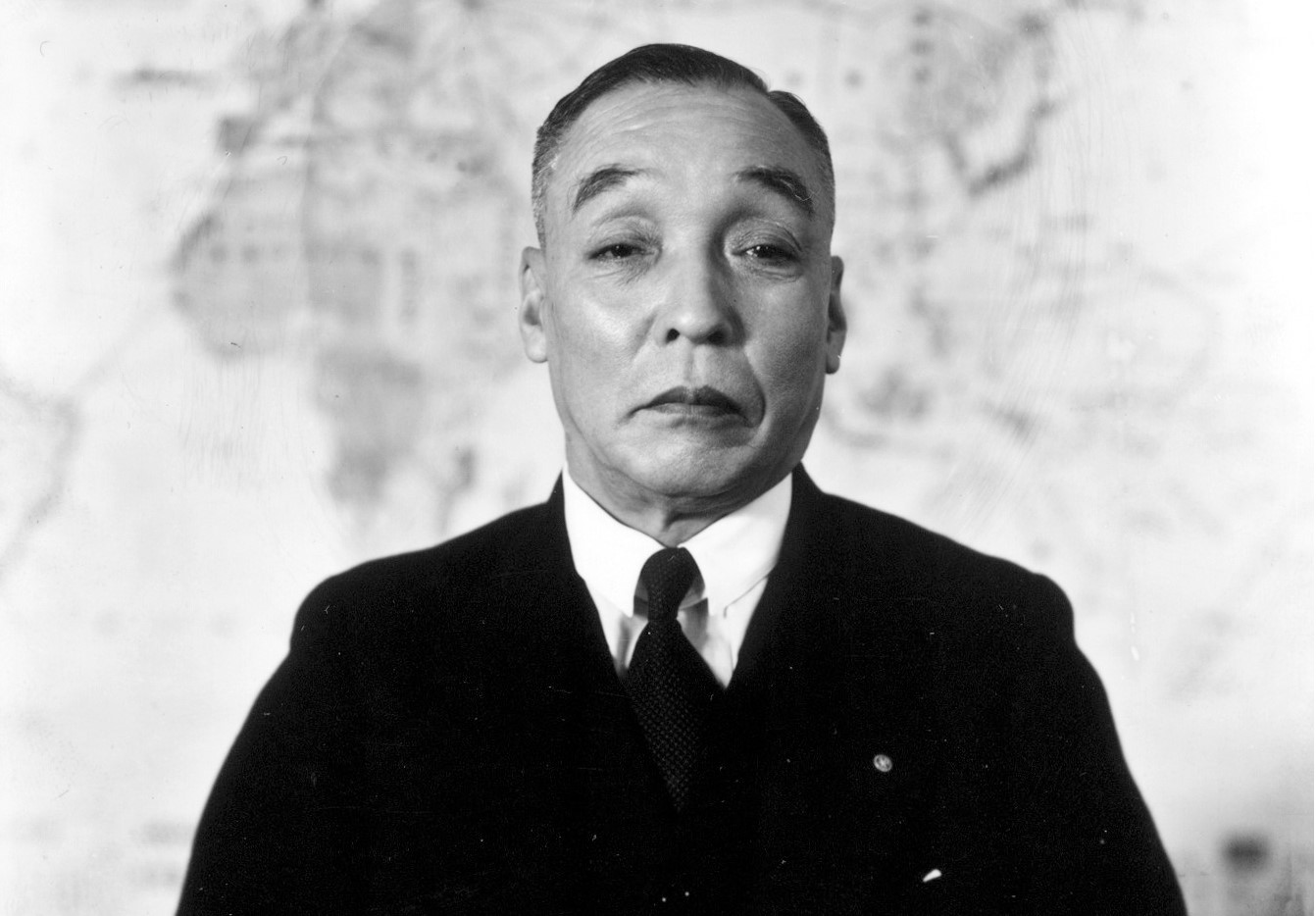 When Jujiro Matsuda left his favourite Hiroshima barber shop on his 70th birthday, he had every reason to be content. He had just had a haircut for his birthday, as had been his custom for years. He had made his fortune, rising from humble origins to become a highly respected and successful businessman – a true rags to riches story right out of a Hollywood script. And he had every reason to believe that he would pass on a thriving business to his son, who in his own right was starting to show his business acumen. On 6th August 1945, the day the atomic bomb was dropped on Hiroshima’s city centre. A day that would not only change the fortunes of Matsuda’s company, but the world.

The devastating event could easily have spelled the end for the budding industrial machinery company in Mukainada, on the outskirts of the bombed city. Instead, it was the birth of a special kind of “Challenger Spirit” which would become a defining feature of the company today known as the Mazda Motor Corporation.

Overcoming challenges had been a big part of Jujiro Matsuda’s life even before that fateful day in 1945. Born in 1875 as the 12th son of a poor fisherman in Mukainada, Hiroshima Prefecture, it was hardly to be expected that young Jujiro would ever amount to anything more than a fisherman himself – a trade he took up during his childhood after his father had died when we was just three years old. But Jujiro Matsuda had bigger things in mind. At the ripe old age of 13, he set out on his own to Osaka, about 300 kilometres from his childhood home, to become a blacksmith. By the age of 20, he had opened his first metalworking shop. By 31, his own invention, the patented Matsuda pump, had brought a certain prosperity to the engineer and his young family.

In its heyday, the “Matsuda Works” company employed some 4,000 people and produced artillery fuses for the Russian Tsar. But when the founder wanted to expand production to his hometown of Mukainada, the opposition Jujiro Matsuda encountered from his co-owners eventually caused him to t leave his own company.

Once again, however, Matsuda met adversity with ambition to start afresh and forge his own way ahead. A way that was by no means easy or comfortable. Looking back on his life  Jujiro Matsuda later reflected: “I treaded nothing but thorny and rocky paths. The paths were full of difficulties and agony. I walked straight. Hurting, breathing hard, sometimes blinded, I walked straight.” What enabled him to continue on this inhospitable path? “Trust in myself and others,” says Matsuda. “My life is a life of trust; therein lies my profound gratitude.” This trust eventually paid off. After he had sold another successful metalworking business venture to the prominent Nihon Steel Manufacturing Company, Jujiro had made his fortune – a fisherman, turned blacksmith, turned entrepreneur.

From cork to cars

When the still young entrepreneur was approached in 1921 to help revitalise Toyo Cork Kogyo, a struggling manufacturer of cork products which he and a group of other investors had purchased the year before, he once again rose to the challenge. Matsuda became the company director and promptly began shifting the business away from cork. The substitute harvested from the native abemaki trees had been thriving during the trade restrictions of World War I, but demand was faltering fast. After a fire had burnt down the factory in 1925,  Jujiro Matsuda therefore decided to start afresh, drop the ‘Cork’ part from the company name, and began steering the business in a new direction – metalworks, naturally. The new machine building division soon became the company’s core business, until Matsuda revealed the next ace up his sleeve: the Mazda-Go, a three-wheeled truck and the company’s first foray into the vehicle sector. It would, of course, be far from the last.

The fact that Mazda eventually became not only the brand but also the company name in 1984 can be seen as an indication of the three-wheeler’s success. The word itself is not only reminiscent of the Matsuda family name but is also a reference to Ahura Mazda, Persian god of light and wisdom. Toyo Kogyo had scored a winner with the Mazda-Go. The ten units being produced per day were not nearly enough to satisfy the demand.

The three-wheeler was ideally equipped to haul larger quantities of goods through the narrow streets of Japan’s cities and came with technical innovations like a four-stroke engine that were pure luxuries at the time. As with his pump, and many more times in the years to come, Matsuda chose to challenge convention – and won. There were even plans to launch a four-wheeled car in 1940, but World War II put an abrupt end to the project. And then, five war-torn years later, the bomb dropped, and the world in Hiroshima ground to a screeching halt.

Out of the ashes

Mukainada, the Hiroshima suburb where the Toyo Kogyo factory was located, is about five kilometres from the drop site. And at 8:15 am, Jujiro Matsuda was already on his way back to the company grounds. It was this fact that saved Matsuda’s life – and his company from utter destruction. Jujiro Matsuda’s car was thrown off the road by the bomb’s impact, but he and his driver emerged relatively unscathed. Although the company headquarters lay in ruins, structural damage on the factory grounds in Mukainada was fairly minimal. The emotional toll, however, was immense. In an instant, 80,000 people were dead, among them many employees of Toyo Kogyo. Countless more were injured, had lost their homes or their families. Despair in these circumstances would seem a very natural response. But that’s not what the people of Mukainada are made of.

In an impressive feat of undaunted determination, the city began pulling itself up by its bootstraps, and the Matsuda family were prepared to do their part. First, Jujiro and his son Tsuneji, by then a part of the company, set about alleviating the immediate needs of the community. Among other things, the Mukainada plant was turned into a makeshift hospital, City Hall, a police station, a courthouse,  and newspaper office, and employees helped citizens to reunite with their families.

Four months later, the company was ready to resume production of the three-wheelers – and with nationwide rebuilding efforts under way, demand for cargo vehicles was higher than ever. Business, once again, was booming. But the events following the attack on Hiroshima had changed the company for good. The city and the company had experienced that together, they had seen that they could face aversity and emerge victorious. The result was a willingness to meet challenges head on, to never give up, that shapes Mazda even today. The “Mukainada Spirit” was born out of the ashes of a destroyed city.

The next generation of challengers

Jujiro Matsuda had always been a challenger at heart, and his son Tsuneji Matsuda was about to follow in his footsteps. the younger Matsuda had played an active part in the reconstruction efforts after the war and was deeply impressed by the determination and courage he had witnessed in those days. When he became president of Toyo Kogyo in 1951, the company had successfully expanded its business with the Mazda three-wheelers and some four-wheeled utility vehicles, but the heir to Jujiro Matsuda’s legacy had his sights set on the passenger car. In 1960, the day had come: Toyo Kogyo launched the Mazda R360 Coupé, a compact kei car that took Japan by storm. These ultra-small vehicles had seen a boost from the Japanese government in a bid to alleviate traffic congestion, and the latest Mazda model set itself apart from competitors in this segment with its coupé form and technical innovations like lightweight construction. This combination perfectly captured the zeitgeist of a growing middle class: In 1963, reached the one million milestone in terms of total production; by 1966, that number had doubled.

It wasn’t all smooth sailing, however. During his time at the helm of the Mazda ship, Tsuneji Matsuda had ample opportunity to put his own version of the Mukainada Spirit to use. In the 1960s, the Japanese government was pressuring smaller manufacturers to consolidate their businesses into bigger, national corporations that could compete on a global scale. Nissan, Toyota or Mitsubishi were to become the new home of many small OEMs. But Matsuda was determined to protect the company’s legacy and continue on the rocky but independent path his father had set out on.

The solution came in the form of a German engineer and his revolutionary invention: Felix Wankel and his rotary engine. In 1961, Mazda signed a licensing agreement with German company NSU, who had snapped up the patents for the technology. The idea – If Toyo Kogyo remained unique enough, the company might just manage to keep their independence. A risky gamble, especially since the rotary engine was in no way ready to be put into an actual production vehicle. But, as so many times in Mazda’s history, his boldness paid off. To this day, rotary models like the Mazda Cosmo Sport 110 S or Mazda RX-7 are among the most beloved models of the company’s history and helped put Mazda on the global map.

The spirit lives on

The reign of the Matsuda dynasty came to an end in 1977. Kohei Matsuda, the eldest son of Tsuneji, had been heavily involved in the rotary project from the start and had taken over as president in 1970. Like his father, he wanted to continue developing the technology, but the Great Oil Crisis was a huge blow to the project. Even though the third generation of the Matsuda clan launched the project that would eventually become the iconic Mazda RX-7, Kohei Matsuda stepped down before the project ever hit the streets of Japan.

Although Mazda is no longer in the hands of the Matsuda family, the Challenger Spirit they instilled in the company is alive and well. The headquarters is still located in Mukainada. Whenever challenges arise, the history and mentality that this place represent remind all Mazda employees to challenge conventions and boldly search for new solutions – not only in Japan, but across the globe.

“The only way to create something extraordinary is to work together. Finding innovative and unconventional ways to overcome challenges – that is what Mazda has always done, and what we will continue to do,” says Martijn ten Brink, CEO of Mazda Motor Europe, who has been with the company for over 20 years. “It is this Mukainada heritage that will also help Mazda face crises in the form of natural disasters or pandemics and also tackle the exciting challenges of today: Connectivity, autonomous driving and the idea of shared mobility are fundamentally redefining what driving – and owning – a car really means, with profound implications on car manufacturers around the world.”

And a push for electrification and CO2 reduction is putting new pressure on engine development. For a relatively small manufacturer like Mazda, finding their own, independent solutions to these challenges will not be easy – the path is rocky and thorny, after all – but in the end, it will be worth it.