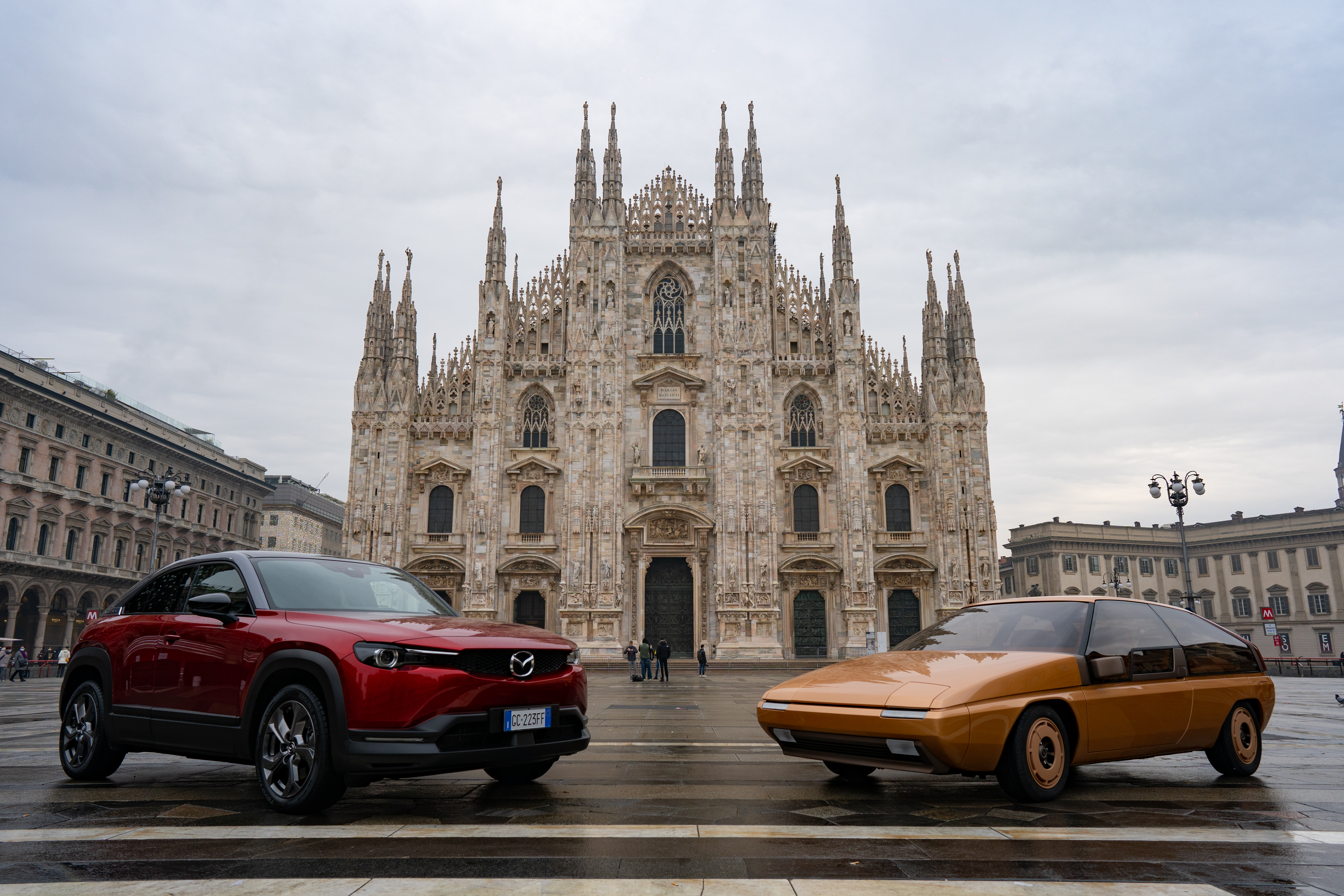 In the year that the Mazda MX-30 has gone on sale in the UK, Mazda Italy has carried out a restoration of the first Mazda to wear the MX badge – the Mazda MX-81 Aria. Returned to its original futuristic glory 40 years after its unveiling at the 1981 Tokyo Motor Show, the small wedge-shaped coupe was designed by Marc Dechamps for Turin based coachbuilder Bertone, and as the first Mazda to wear the MX badge, this bold concept car established the MX prefix that continues to be given to Mazdas that take on a challenge to create and deliver new values without being confined by convention regardless of vehicle type.

To create the Mazda MX-81 Aria concept car Bertone used Mazda 323 running gear and built a futuristic wedge-shaped hatchback. With its gold paint, huge glasshouse and pop-up lights it stood out at the 1981 Tokyo Motor Show, but with its recessed square steering wheel, TV screen cockpit and side swinging front seats, it was arguably the interior that was the most radical. A one-off concept that certainly met the defy convention ethos of MX models, it led to things like the high-mounted taillights and pop-up headlamps appearing in future Mazda production cars later in the eighties.

While lots of prototypes and concepts are destroyed once exhibited, in 2019 Nobuhiro Yamamoto – the former fourth-generation MX-5 programme manager and rotary engine developer – found the MX-81 in a warehouse at Mazda’s Headquarters in Hiroshima. From this discovery came the idea to restore the car and it was shipped to Mazda Italy, from where it has been painstakingly restored by SuperStile in Turin under the coordination of Flavio Gallizio. Fittingly, the completion of the restoration was celebrated by the recreation of the original press images of the MX-81 in front of Milan Cathedral.

However, the connection between Mazda and Italian design celebrated by the restoration of the MX-81 actually started 20 years before this radical concept was revealed at the 1981 Tokyo Motor Show. In 1960 Hideyuki Miyakawa, a young automotive writer, travelled to Italy and the Turin Motor Show where he met Giorgetto Giugiaro, the Head of Design at Bertone. He also met his future wife, Marisa Bassano – a Japanese-Italian translator with a passion for cars. During Marisa’s study trip in Hiroshima in 1961, Miyakawa met Mazda chairman Tsuneji Matsuda and the pair discussed the importance of design in the Japanese car industry.

Back in Turin, Hideyuki and Marisa began working as intermediaries between the legendary Italian design studios of Bertone, Ghia and Pinifarina and the Japanese car manufacturers. The collaboration between Mazda and Bertone they helped to facilitate led to Giugiaro designing the Mazda Familia and Luce models of the 1960s, plus the stunning rotary powered R130 Luce Coupe of 1969. The relationship with Bertone continued even after Giugiaro left to work for Ghia, and the restoration of the Bertone created 1981 Mazda MX-81 Aria is a great celebration of that partnership.

However, the Mazda MX-81 was only the beginning of the story of the MX badge, which has been used more than a dozen times across a broad spread of production, concept and racing Mazdas.

Next in the MX lineage after the MX-81 was the 1983 MX-02 concept car, a big flat sided five-door hatch with large windows, aerodynamic rear wheel covers and flared in door mirrors. Unique features included rear wheel steering and a windscreen head-up display. The one-off theme continued with the 1985 Mazda MX-03, which again was a radical looking concept car, but this time it was a defy convention sports car that was powered by a triple rotor 315ps engine. Conceived purely as a concept, this low-slung coupe, was pure futuristic exuberance, with a cabin that featured an aircraft style yoke rather than a wheel, plus digital displays and a head-up display, its technology tally also including four-wheel steering and all-wheel drive, while the long low body delivered an aerodynamic Cd figure of just 0.25.

While the MX-02 and MX-03 shared some of the same futuristic design cues, the MX-04 was completely different. Revealed at the 1987 Tokyo Motor Show, the MX-04 was a front-engine rear-wheel drive sports car chassis that had removable fibreglass panels, but not just one, but two different sets, allowing the car to switch from a glass dome roofed coupe to a beach buggy style open sided roadster. Powered by a rotary engine this barmy shape-shifting sports car was never a serious contender for production, but little did outsiders know that Mazda was already developing the MX-5, and just two-years later, the most famous car to wear a MX badge arrived.

The next cars to wear the MX badge were the MX-3 and MX-6 production coupes, both built on the MX-5’s success and offered very different coupe styles, but in the 1990s arguably the most radical car to wear the MX badge was the Mazda MXR-01. After the rotary powered Mazda 787B took victory in the 1991 Le Mans 24 Hours, the FIA promptly banned rotary powered cars, leaving Mazda looking for a new car for the 1992 World Sportscar Championship at very short notice. A solution arrived in the shape of the incredible Mazda MXR-01 prototype race car. Based on the previous seasons Jaguar XJR-14, the British firms’ withdrawal from sportscar racing, allowed Mazda to adapt this radical Ross Brawn designed prototype and fit a Mazda badged V10 Judd engine. Famed for its incredible grip and downforce, just five examples where built, but sadly the collapse of the World Sportscar Championship at the end of 1992 spelt the end of Mazda’s world level motorsport programme and denied the MXR-01 the chance of success.

Into the 21st century the MX moniker returned to adorn concept cars: the 2001 MX-Sport Tourer concept was a radical MPV concept with freestyle doors and sweeping body design, that highlighted the fact an MPVs did not have to be boxy or dull, something the resulting Mazda5 proved. In fact, the 2004 Mazda MX-Flexa was a concept that was even closer to the final ground-breaking Mazda5 production car, sharing its popular sliding rear doors.

The 2002 MX-Sport Runabout concept previewed the modern look of the second-generation Mazda2, the 2003 MX-Sportif was the concept that previewed the first generation Mazda3 and the MX-MicroSport was a US focused hatchback concept revealed at the 2004 Detroit Motor Show. But the nineties MX concept that really started Mazda on the road to another success story, was the 2005 MX-Crossport. Inspired by the Mazda RX-8 sportscar this was a sporty looking SUV concept with sculpted wheel arches, slender headlamps and bold shoulder lines that previewed the Mazda CX-7 – a pivotal car that established a lineage of award-winning SUVs that leads to today’s CX-5, CX-30 and MX-30.

So 40 years after its debut, the restoration of the first ever MX model has appropriately allowed the MX-81 Aria to sit alongside the Mazda MX-30 – a car that represents a new chapter in Mazda’s history.