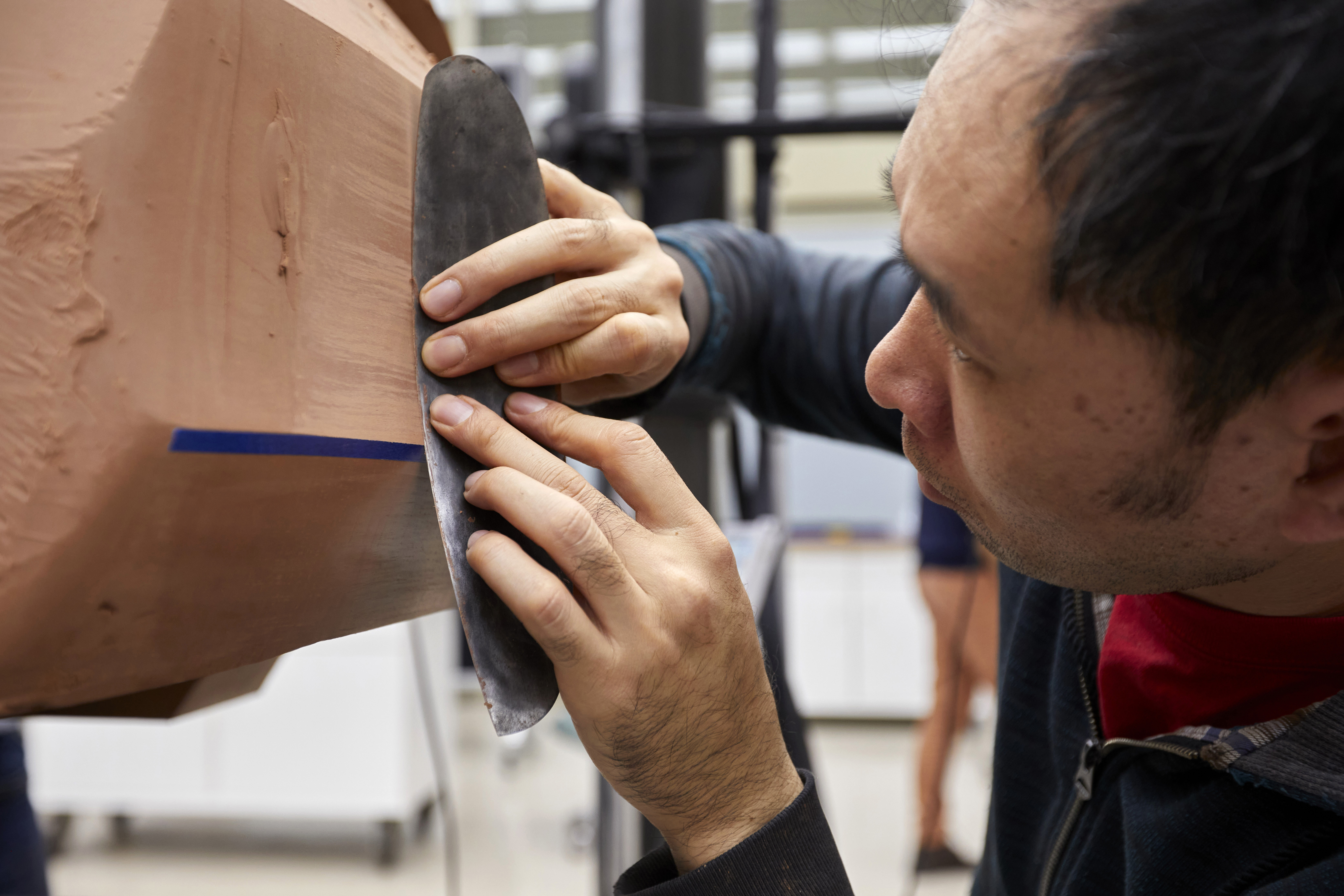 At Mazda’s research and design centre in Oberursel, Germany, as in Japan, designers, developers and Takumi clay modellers breathe life into the designs of new Mazda cars. Takumi, which symbolises dexterity and precision, represents a long tradition of master craftsmanship in Japan. At Mazda they work primarily with clay and metal; elsewhere with wood, paper and the straw used for tatami mats. What they all share is a deep commitment to their craft.

From clay to cars

Using their imaginations and abstraction skills, the Takumi fashion clay sculptures of vehicles in condensed and life-sized formats. Few clay modellers have earned the Takumi title, however. There are major differences in capabilities and speed:

It takes a clay modeller about…

A Takumi clay modelling expert is significantly faster with working about…

… 1 week for a small scale sculpture

From concept to completion, a 1:1 representation takes a fully staffed team around one year. And while several clay sculptures are created concurrently during the course of development of a new Mazda, only one will end up being the inspiration for the production model.

Clay modellers need to hone their skills in different positions for some 20 years before they can assume the Takumi title. There is no established apprenticeship for the trade. Starting as entrance modellers, they eventually working their way up to master modellers before they can become Takumi, the highest possible designation at Mazda.

The modellers first warm up the clay, a special mixture of wax, oil, pigment and filler, to 60°C. The softened material is then applied to the supporting frame before being fashioned into the shape of a car. Hands on clay, transferring energy and depth into the surface’s every nuance.

The clay model illustrates the natural, flowing form of a vehicle – one that seems to be in motion, even when at a standstill. Because for Mazda, the car is more than merely a chunk of metal. It’s like a living creature.

“When preparing a Japanese dish like a traditional dashi fish stock, the method has a major influence on the flavour,” explains Ikuo Maeda, Mazda’s global head of design. “A perfect dashi is a good analogy for what we do time and again to create beauty in its ultimate form. And we apply our recipe to determine the role of each Mazda within the model line-up.”

Kodo, as Mazda calls its design language, means “soul of motion” in Japanese. It stands for designs that always appear to be moving. Based on sketches, a Takumi uses the clay to translate the emotion a vehicle is intended to evoke into a three-dimensional sculpture. The form only becomes a digital 3D model when the clay model is perfectly balanced.

The focus and simplicity of Japanese design principles provide the basis for Kodo’s DNA. Mazda is uncompromising when it comes to striving for automobile design excellence. The belief that truly artistic beauty can only be brought forth by the strength and precision of human hands is deeply rooted in Japanese artisanal culture. That is why Mazda still puts so much value on manual processes and Takumi craftsmanship – and utilises more clay for modelling than any other carmaker.