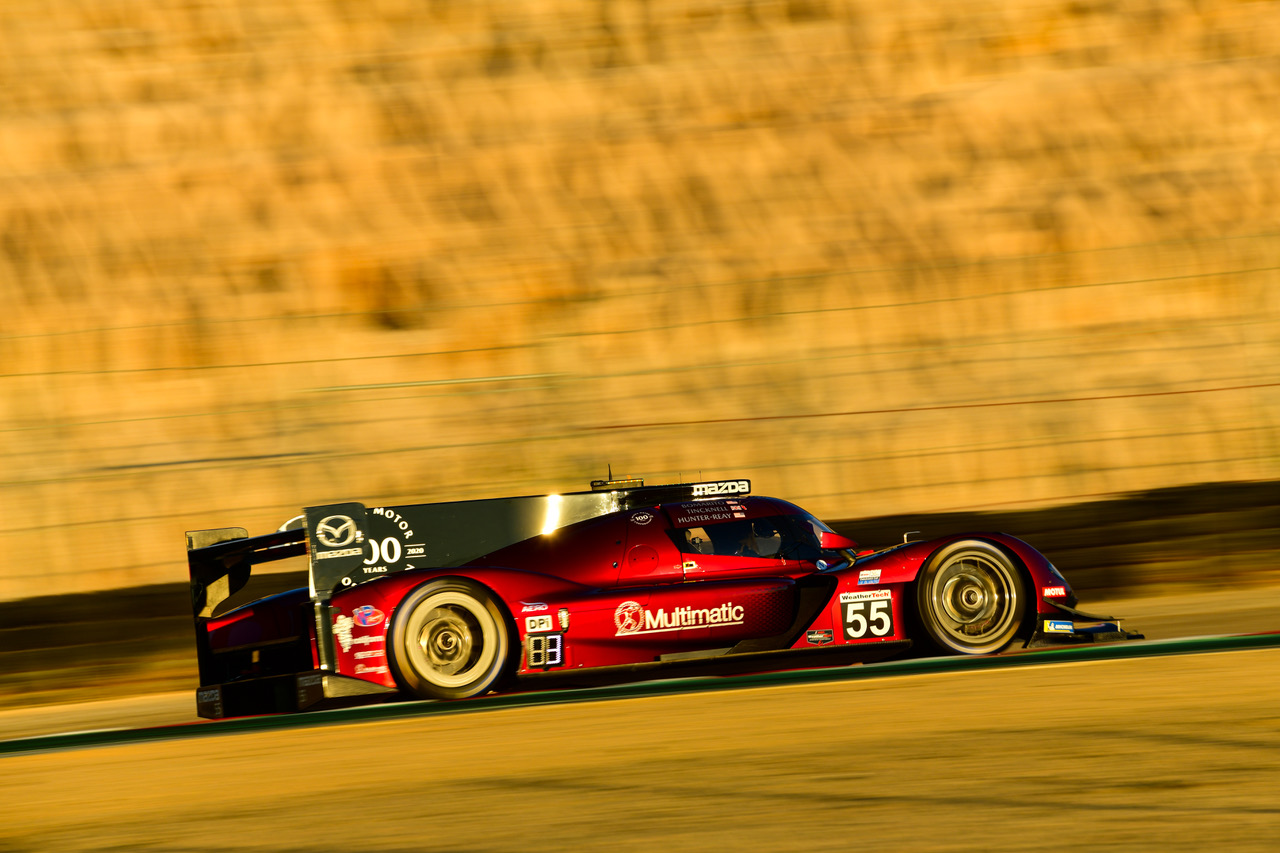 The Mazda Motorsports team was back on form at the latest round of the IMSA SportsCar Championship at Laguna Seca last weekend. The bad luck of the past couple of races was absent and the drivers and team executed impeccably, resulting in some outstanding racing with the Cadillacs. Unfortunately, Penske Acura team was in a class of their own and so Mazda ended a furious two-hour, 40-minute sprint in fourth and fifth, in tight formation, only five seconds separating first to fifth places.  It was the number 55 Mazda RT24-P, raced by Harry Tincknell and Jonathan Bomarito, that came home in fourth, followed by the number 77 sister car of Oliver Jarvis and Tristan Nunez.

Jarvis qualified the number 77 Mazda in a strong third place, just a couple of tenths of a second behind the pace-setting Acura cars, with Bomarito starting in sixth in the number 55.  However when the green flag waved, Bomarito made a strong move to slot in behind the sister car, threading the needle between two of the Cadillacs in turn two and snatching an impressive fourth place.

With the Penske cars pulling away, it was vital that the first pit stops for the Mazdas were perfect. The team delivered, gaining back half the deficit through perfect execution and taking advantage of the undercut.

Forty minutes into the race, the Mazdas were still running within striking distance of the leaders, with the number 77 car leading the chase. The abnormal autumn staging of the race provided little respite from the Californian heat, but Jarvis and Bomarito stayed onboard for a second stint, slugging it out until it was time for Nunez and Tincknell to take over at the halfway mark.

The Mazdas continued the charge, again gaining time in the pits but now the competition had caught on to the advantage of the undercut and so Mazda pushed further on fuel to take advantage of a potential short fill at the end.  A late race yellow bunched up the DPi field with just 20 minutes of the race remaining, with Tincknell fourth and Nunez fifth.

We had been having a great intra team battle so when everyone got bunched together at the end it was a great opportunity for us to try to get on the podium,” said Tincknell. “I was running in fourth, behind the two Penske cars and the number 31 Cadillac. I had used up some of my tyres battling with Tristan (Nunez) but the biggest problem I had was the dirty air. It’s hard to pass at Laguna and as soon as I got close to the number 31 I lost aero and it was like driving on ice so it was impossible to make a proper move.

“It’s a shame we couldn’t make the podium as that’s what the team deserves but we showed better in qualifying, with the number 77 taking third place.  We had an issue on the number 55 during qualifying so our time wasn’t representative of what we could do. I think we’re back on an upward curve so we’re all excited to get to Sebring now for the big finale!”

The final race of the IMSA SportsCar Championship is the Sebring 12 Hours, which takes place in just two weeks’ time on November 14th.