Evolution of the species: Mazda marks 25 years of innovation for the family car 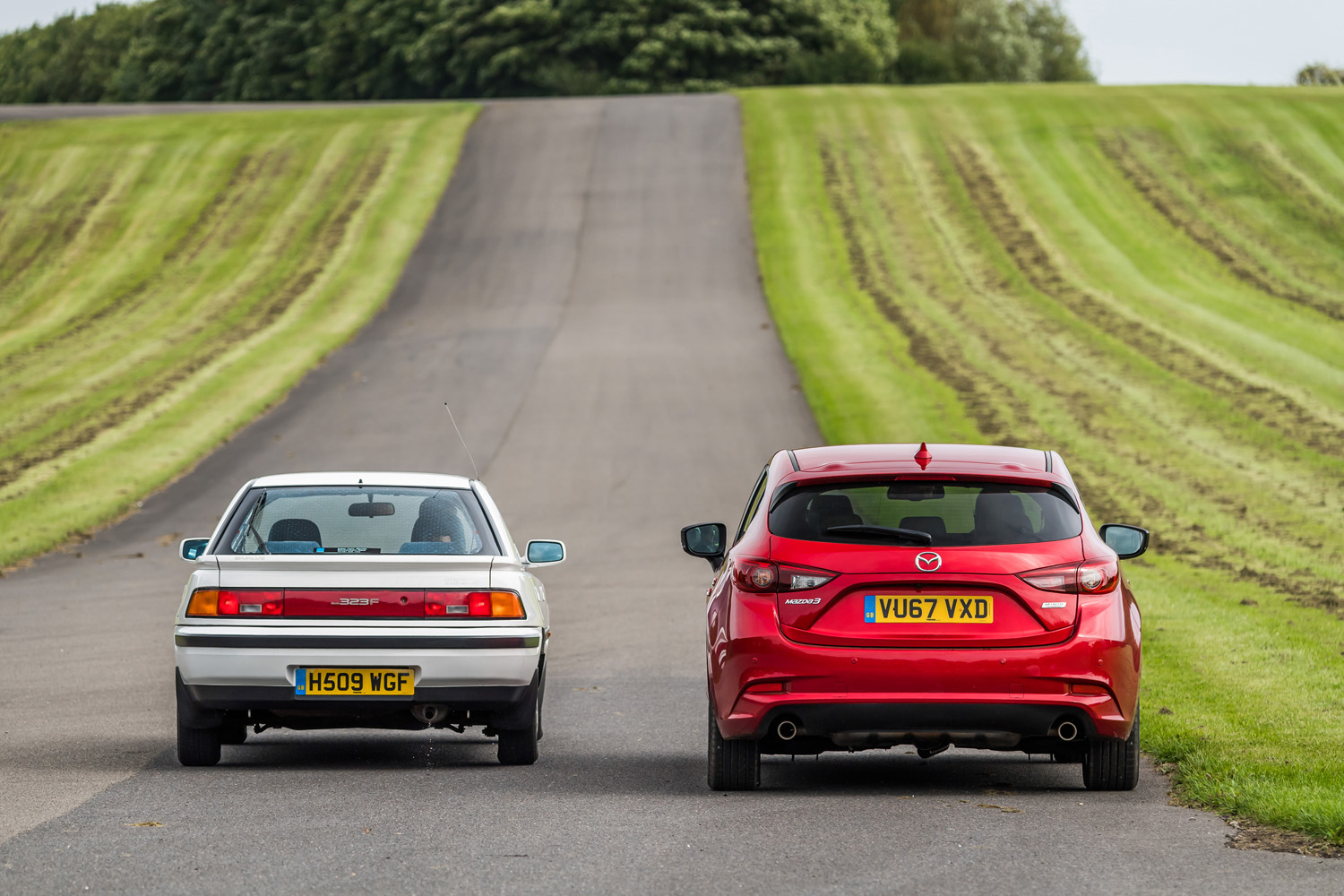 Mazda fans will remember the distinctive design of the Mazda 323 Fastback. Its sleek silhouette and ice-cool pop-up headlights gave it the look of a sports car – a rare treat in a part of the family car market that was as conservative as a pair of corduroy trousers. 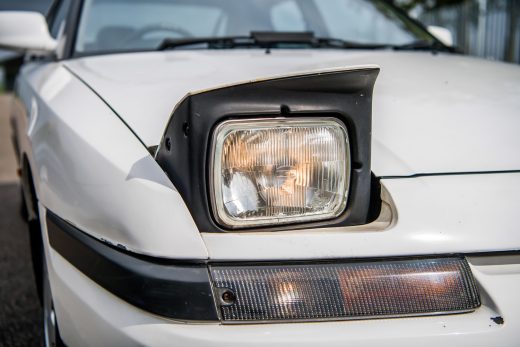 It may not seem that long since the 323F was turning heads on Britain’s roads. In fact, 25 years have passed since the stylish model was introduced to drivers. 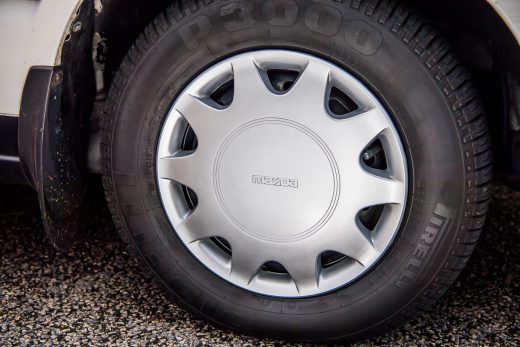 It arrived at a time when the Berlin Wall was being pulled down, Margaret Thatcher was Britain’s prime minister, and Tim Berners-Lee was busy creating something called the Internet. 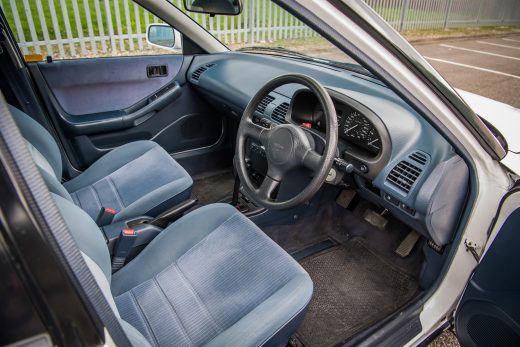 Since then, much has changed, not least the typical family car. The latest, 2017 Mazda3 is different in many ways to its forebear. But arguably one of the greatest advances comes with the level of technology onboard.

To help illustrate the point, we put a 1990 323F up against the new 2017 Mazda3 to investigate the march of progress. 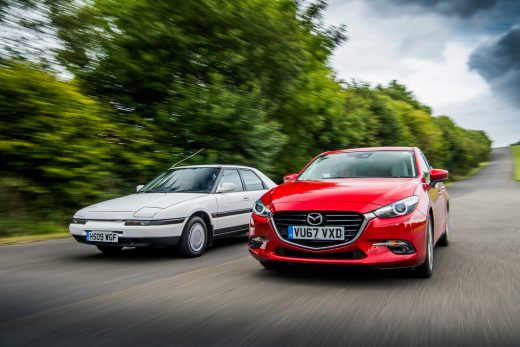 In the late 1980s and early 1990s, drivers weren’t exactly showered with goodies: options lists in glossy brochures were concise to say the least. Today, experimenting with online configurators is a pleasant way to while away an hour or two at work, when the boss isn’t looking.

When it was reviewed by BBC Top Gear’s William Woollard, the 323 Fastback was praised for coming with plenty of features. Electric windows, an electric sunroof, central locking, tinted glass and a radio and cassette player were the highlights. 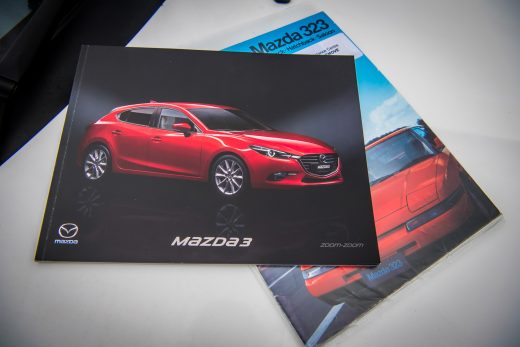 Even after reading a brochure from when the car was on sale, it’s obvious there’s not much more in terms of comfort and convenience. Mobile phones were the preserve of the wealthy and smartphones were still to be invented. Little wonder the interior of the 323F feels functional. 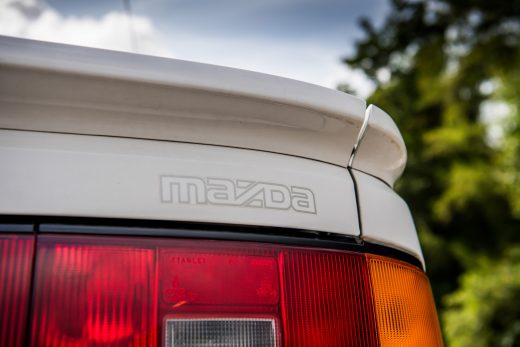 Still, it leaves time to admire the snazzy blue velour upholstery, run your fingers over the plastic steering wheel and marvel at the button that raises the headlamps without switching on the lights, just so you could make a point to drivers of contemporary Porsches that they weren’t the only ones with pop-up headlights. 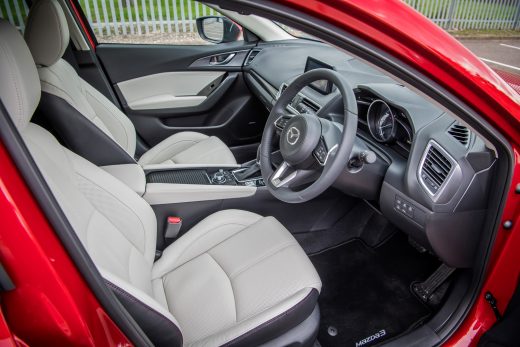 Climb into the driver’s seat of the new Mazda3 Sport Nav and you don’t know where to start. From a head-up display to the heated steering wheel, multifunction trip computer to a helpful infotainment system – MZD-Connect – controlled via a touchscreen or rotary dial, it is brimming with clever kit.

You can talk to your car and ask it to phone home. The passenger can have cool air-conditioning while the driver enjoys a warmer temperature setting. And streaming your favourite music from your smartphone is as easy as singing Do, Re, Mi. 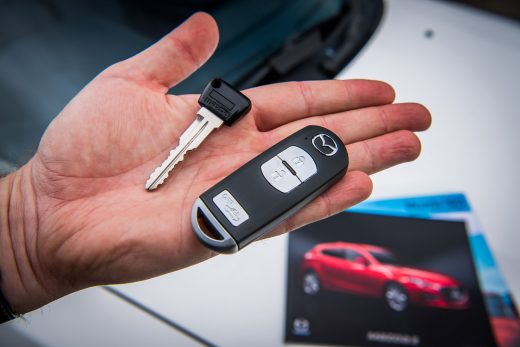 The impression is clear: in the 323F, everyday life was paused until the driver reached their destination. But in the new Mazda3, being on the road no longer means being out of touch.

Most drivers would assume that today’s typical family car is safer than one from 25 years ago. Even so, it’s sobering to see just how far things have come. 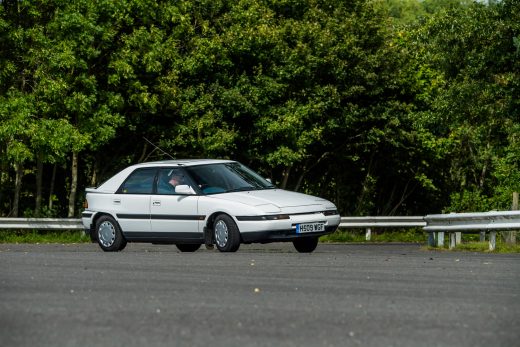 Aside from the Mazda 323F’s body structure, there aren’t much in the way of active or passive safety features. Anti-lock brakes (ABS), which prevent tyres from skidding under heavy braking, was an optional extra on certain versions of the 323F. And browsing the brochure won’t reveal much else other than height adjustment for the front seatbelts and headrests. 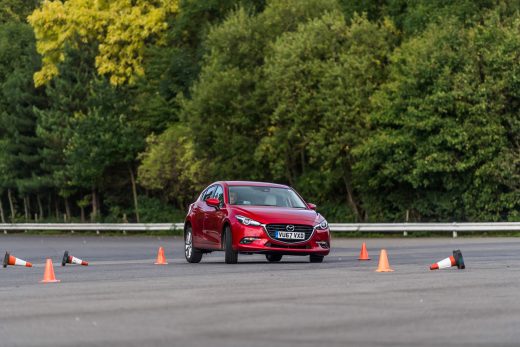 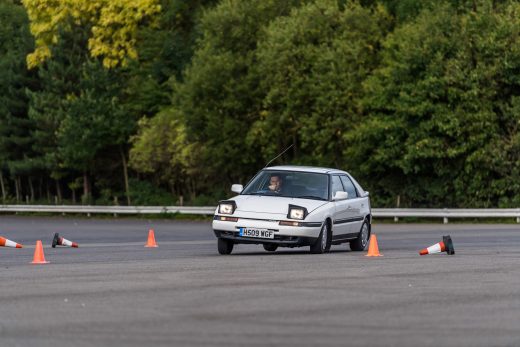 By contrast, the Mazda3 is positively packed with clever kit that can help avoid an accident in the first place, or protect people in the event of a crash. Little wonder it was awarded a five-star safety rating by Euro NCAP, the independent crash safety organisation.

Changing a cassette tape in the 323F could see driver and vehicle wander out of their lane. In its modern successor, a Lane Departure Warning System alerts the driver to such a scenario, while Lane-Keep Assist takes matters a step further and helps the car back on course.

And whether changing lanes in town or reversing out of a busy car park, the modern Mazda keeps a watchful eye over its driver. Sensors for the Advanced Blind Spot Monitoring and Rear Cross Traffic Alert systems can act as an extra pair of eyes, whereas making safe progress in the 323F is a matter of how thoroughly drivers check their surrounding environment. 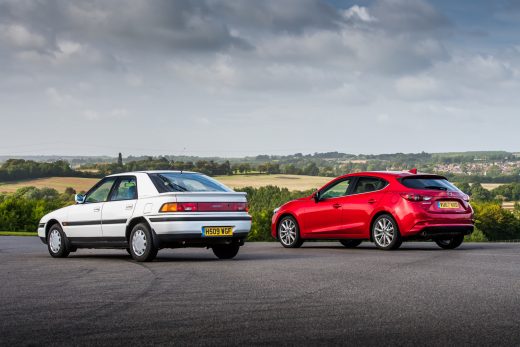 That principle of providing drivers with an extra pair of eyes is also evident with Smart City Brake Support. If a pedestrian steps out in front of the Mazda3, or a vehicle ahead slows without being noticed, the system can warn of a potential collision and even perform an emergency stop if needed.

Perhaps one area that we take for granted are the brakes of a car. ABS anti-lock brakes are effective at preventing a car from skidding, and stability software – such as Mazda’s Dynamic Stability Control – means that the modern family car is surefooted and secure no matter what the situation.

By contrast, when faced with an emergency lane-change at 50mph the 323F rolled into a violent tail slide that could have spelled disaster for an inexperienced driver. Performing the same test in the Mazda3 gave no cause for concern. 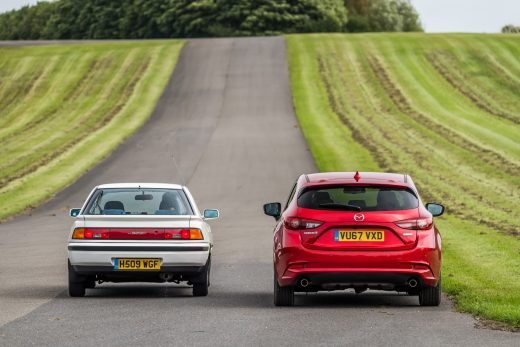 Performance: responsive and refined in all conditions

The advances made by Mazda’s engineers are best appreciated when you drive the new and old cars back to back.

There’s no point pretending otherwise: the 1990 Mazda 323F used for this comparison test is something of a shock to the system when you take to the road.

It may be light at 1029kg, which can benefit performance and efficiency, but it feels flimsy. And performance can be kindly described as leisurely: 0-60mph takes 13 seconds.

The 1.6-litre, four-cylinder petrol engine, which has covered fewer than 40,000 miles in this prized example, is noisy and the four-speed automatic gearbox is slow to respond. By 70mph, the motor is buzzing away at 4,300rpm and it makes enough of a din when combined with the wind and tyre noise to have drivers wishing they didn’t have so far to travel.

By contrast, the 2-litre petrol engine and six-speed automatic gearbox in the Mazda3 can power the 1,480kg car from 0-62mph in just 8.2 seconds.

More significantly, the new machine is beautifully appointed, the structure and suspension feel robust and refinement levels are quiet enough to let you hold a whispered phone call over the MZD Connect hands-free system.

The family car is better than ever

After driving the 1990 Mazda 323F and 2017 Mazda3 back to back, the conclusion is clear: the family car is better than ever.Mazda’s engineers have worked tirelessly to improve safety, technology and performance – and sure enough, you can feel how things have come on in leaps and bounds.

But there’s something else worth mentioning: an unexpected surprise that puts a spring in your step. Knowing you are safe and connected to the outside world aboard the Mazda3 means you relish every drive.

Some drivers like to complain that they don’t make cars like they used to. But most of us are glad they don’t. 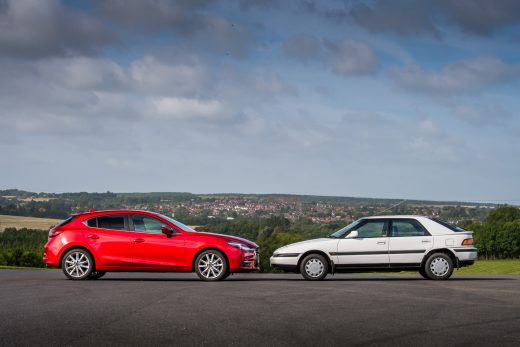 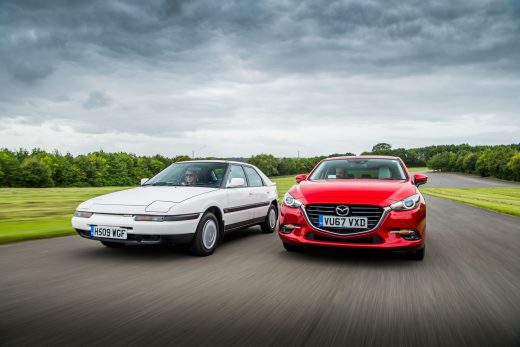