Exploring Iceland in a Mazda MX-5 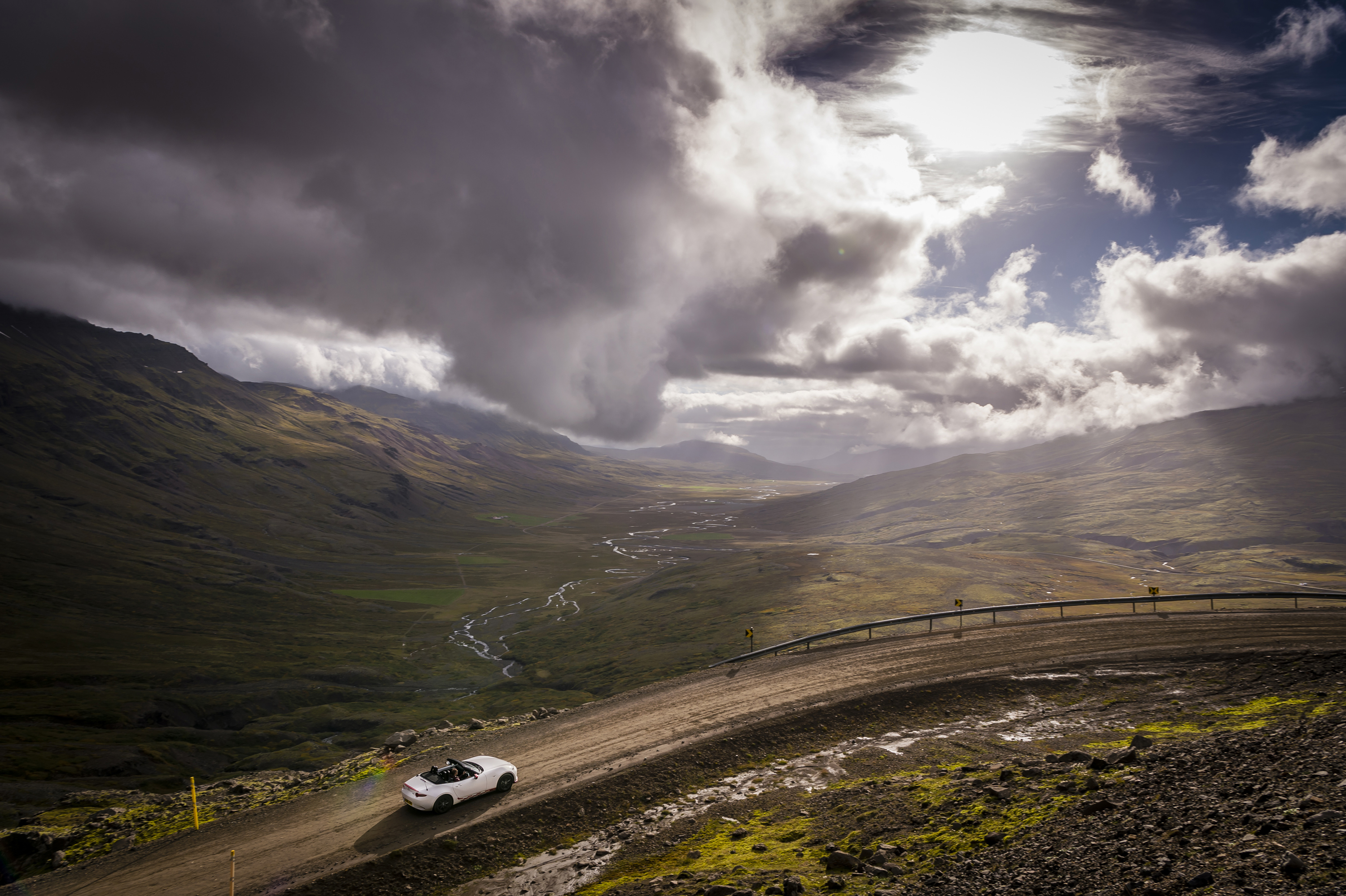 The magic ring of fire: exploring Iceland’s Route 1 in a Mazda MX-5

Less than an hour after starting a lap of Iceland on the country’s celebrated Route 1 ring road, you can be carving along mountainsides that tumble into vast fjords, the road rising, falling, twisting and turning, wrapping itself around the neck of the landscape like a cowboy’s lasso desperately trying to keep a grip of a bucking bronco. 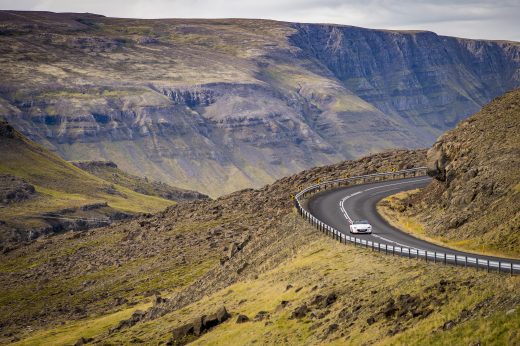 It’s not a ring road in the sense most of us understand. It’s largely just a solitary lane to head clockwise, and another for those travelling anti-clockwise. You don’t get hard shoulders, emergency laybys, traffic cameras or depressing driver information boards, warning of that day’s disruption to travellers. 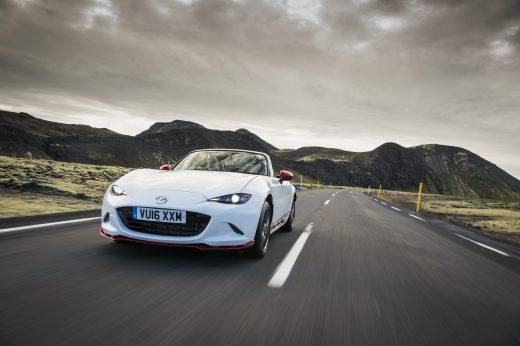 You won’t encounter traffic lights, because there’s no traffic to control. There’s no gridlock, because, in places, there are no people or homes, let alone cars. And the last recorded incident of road rage dates back to 1969, when Guomundur Johannsson reversed into the post box of Eirika Sigurdson, and she had to politely but firmly ask him to repair it. Perhaps. 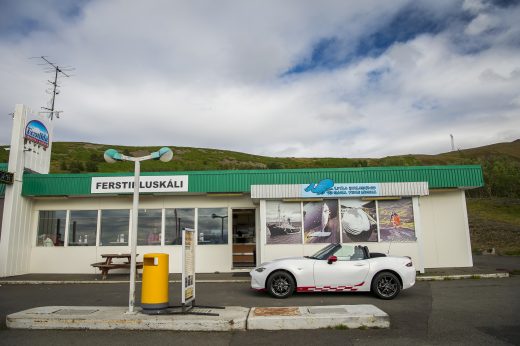 Route 1, then, is the perfect complement to Iceland, the magical land of ice and fire. It’s where you can come to fall in love with driving all over again. And what better way to experience the mesmerising landscape that this 830 mile road trip has to offer, than travelling by roadster? 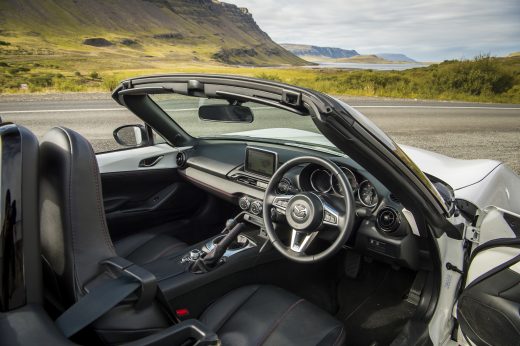 Not any old roadster; but the latest incarnation of the world’s most best-selling two-seat roadster, the Mazda MX-5. The Icon special edition is limited to 600 models in the UK, and it adds some special touches [https://www.mazda.co.uk/cars/mazda-mx-5-icon/] to this very special sports car. 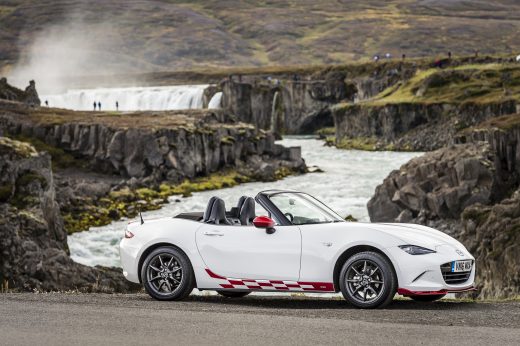 Why is a roadster perfect for such a journey? Easy. Panoramic views are afforded at the flick of a catch and push of your left arm. In the time you can say “Bring me sunshine” the fabric hood can be thrown back. The heated seats and the climate control can be set to toasty and the map can be largely discarded; there are precious few junctions or turns, and you’ll see most attractions looming large in the distance, a stone’s throw from Route 1. 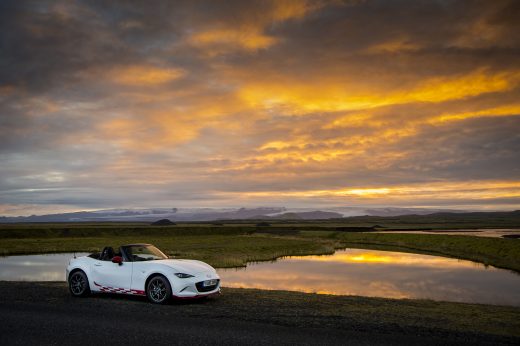 We’re travelling with two essential pieces of equipment. First, a packed lunch, with a choice of cheese and tomato or ham and egg sandwiches, but a total and noticeable absence of chocolate – clearly, the hotel’s chef is inexperienced in the packed lunch department. Second, a jerry can, filled to the brim with fuel for the Mazda’s eager-to-please 1.5-litre, four-cylinder petrol engine. In places, service stations are few and far between, so it’s a sensible precaution to carry a top-up, and to fill up whenever the MX-5’s fuel gauge shows the tank’s down to its last quarter. 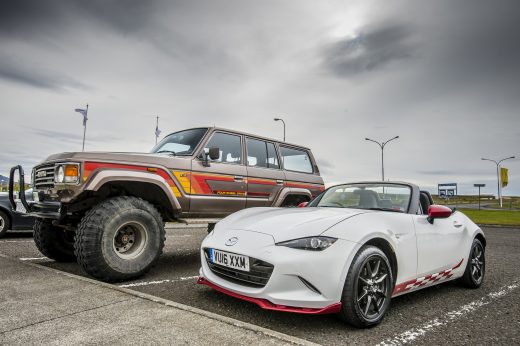 Setting off from Reykjavik, we’re allowing two days to lap Iceland. Most visitors give it at least a week, but they’re generally pottering around in hired camper vans that barely get out of first gear before they’re pulling over for another photo opportunity. 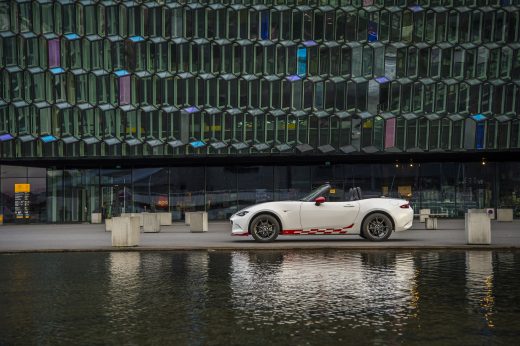 The roof is lowered – at a moderate 10 C, it’s no hardship – and the heated seats are on. And it’s pleasing to find that the cabin is calm at speed, the heater keeps you warm below shoulder level and a good head of hair or woolly hat will take care of the rest. 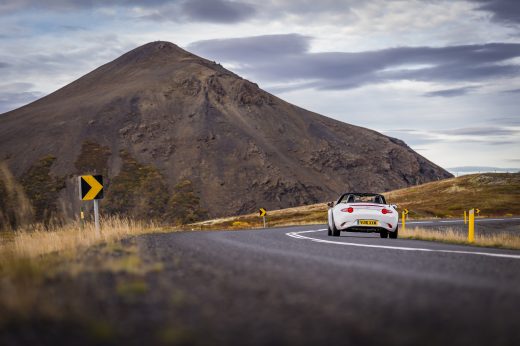 We’ve opted to stream The Sugarcubes through the Bose audio system, the band that helped Bjork make a name for herself. Although perhaps Louis Armstrong’s What A Wonderful World would be just as appropriate; in places, this volcanic landscape feels as though it’s still stuck in the ice age, with glaciers, cascading waterfalls, geothermal springs (you’ll never revisit these once you’ve experienced their pong) and vast beaches of black, volcanic sand. 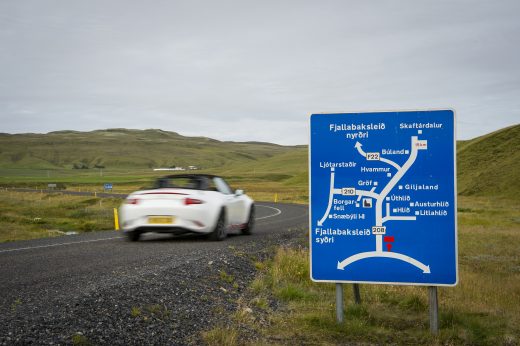 There are 35 active volcanoes on the island. Outside of Iceland, the best known of these is Eyjafjallajökull, which brought air travel to a halt after a relatively modest eruption, in 2010. But the most popular is Thrihnukagigur volcano. Don’t worry about how it’s pronounced; all you need to know is it’s been dormant for 4,000 years. The latter is where you can test your nerve, with guided walks inside its base and crater.

British drivers won’t be able to help but remark on the excellent condition of Route 1. It’s in remarkably fine fettle, compared to any UK road, but then again, with just 300,000 inhabitants in Iceland (200,000 more people live in Manchester) it’s not subjected to a great deal of punishment. 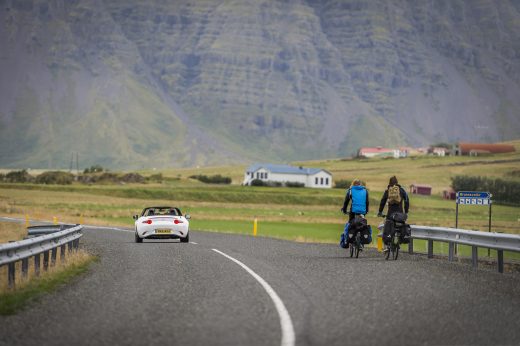 Within a matter of minutes of leaving the island’s capital and heading north, the scenery will have you pulling over to capture the first of hundreds of pictures. It’s tempting to ponder how tourists from a couple of decades ago would have tempered the desire to take pictures with the fact that they were armed with one or two disposable, wind-up cameras.

Weight, or lack of, is what makes this roadster so thrilling to drive. It’s such a responsive little thing, a welcome antidote to the many sports cars that are getting larger, heavier and more complicated, and in the process appear to do their best to remove the driver from the pleasurable process that driving can and should be. 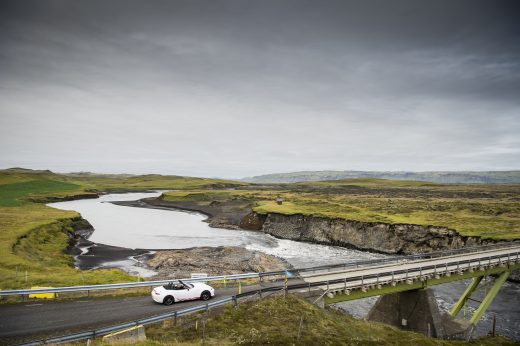 In the mountains of Breiodalsheioi, the road meanders around incoherently, like a lone sheep lost in a blizzard. There’s also the added challenge of unmade sections, with a gravel surface that resemble a rally stage. But even here, there’s not a pothole in sight. Just take note; it’s closed during winter months. 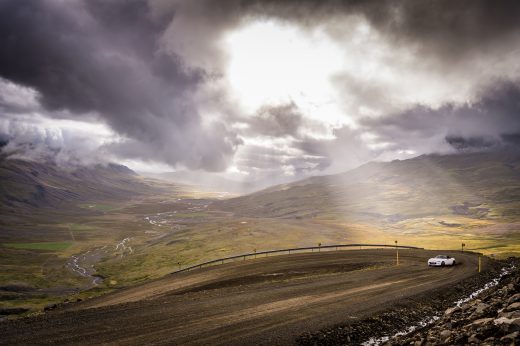 If you can visit during the spring or, as we did, the autumn, you’ll be faced with the view of hairpin after hairpin descending into the valley below, with not a guard rail in sight. Vertigo sufferers should come to conquer their fears. 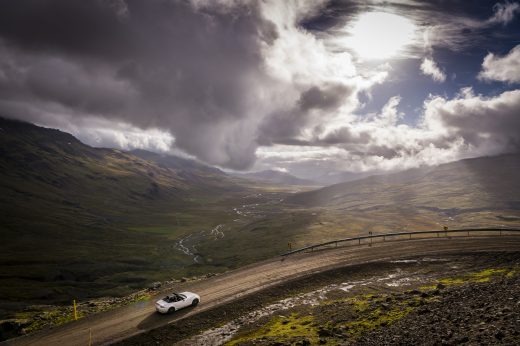 With such far-reaching visibility and no signs of civilisation, we’re able to stretch the car’s legs and wind it’s free-revving 1.5-litre, four-cylinder engine to the red line in the lower gears. (The drinks are on me if you can find a car with a more satisfying manual gearshift). It dances through tighter turns as if on tiptoes and the suspension never gets phased by sections of the road that rise and fall like the waves of the Atlantic ocean.

However, you have to fight the urge to keep charging, as the speed limit on most stretches is 90kph (56mph), and the police treat speeders with the contempt normally reserved for Iceland’s economy-busting bankers. 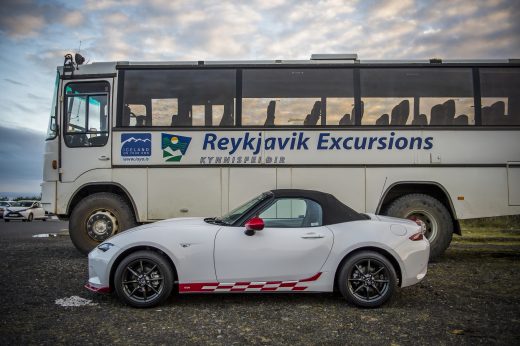 In other countries, tourist attractions will be overrun with open topped buses. Here, specially built minibuses with comically large axles and tyres tower over our two-seater like a beached Orca whale. Quite what the band of hardy cycling tourists make of these giants of the road, as they bluster past, is probably unrepeatable. 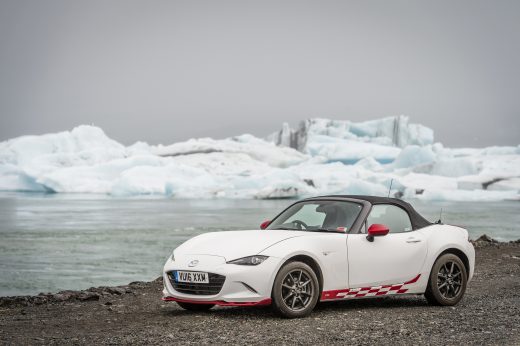 At Jokulsarlon, on the south east coast, everyone stops at the Glacier Logoon, where icebergs congregate before glacial meltwaters carry them out to sea. You can park at the edge of the lagoon, framing the icebergs in the MX-5’s windscreen. So we do, snapping away for Instagram and, once again, marvelling at the relatively uninterrupted 3G phone coverage. 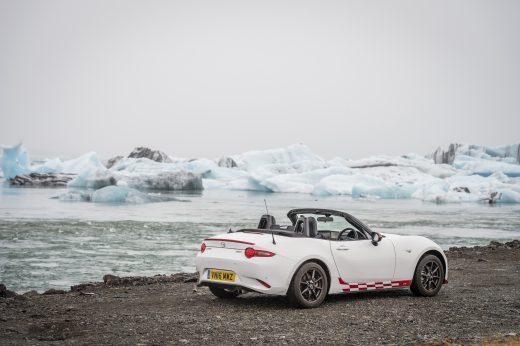 We find ourselves the subject of other onlookers’ Instagram updates. Sports cars like the MX-5 are few and far between in the land of ice and fire. Locals and tourists alike are intrigued, asking where man and machine are from.

The local Mazda dealer says they’ve sold just two of the roadsters on the island; whoever those drivers are, we salute you.

Most people opt for an SUV or 4×4, like the CX-5. That’s a shame. The MX-5 is not just terrific fun to drive, it’s surprisingly practical too. With a set of winter tyres fitted to it, I can’t see why more Icelanders couldn’t enjoy their driving, 365 days of the year. 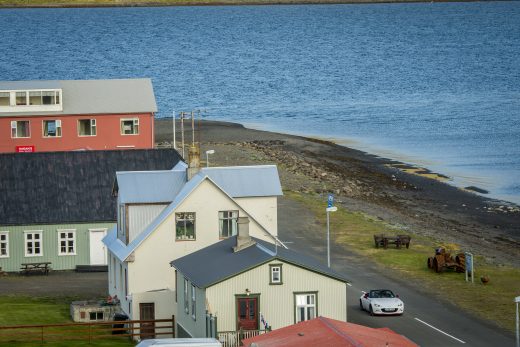