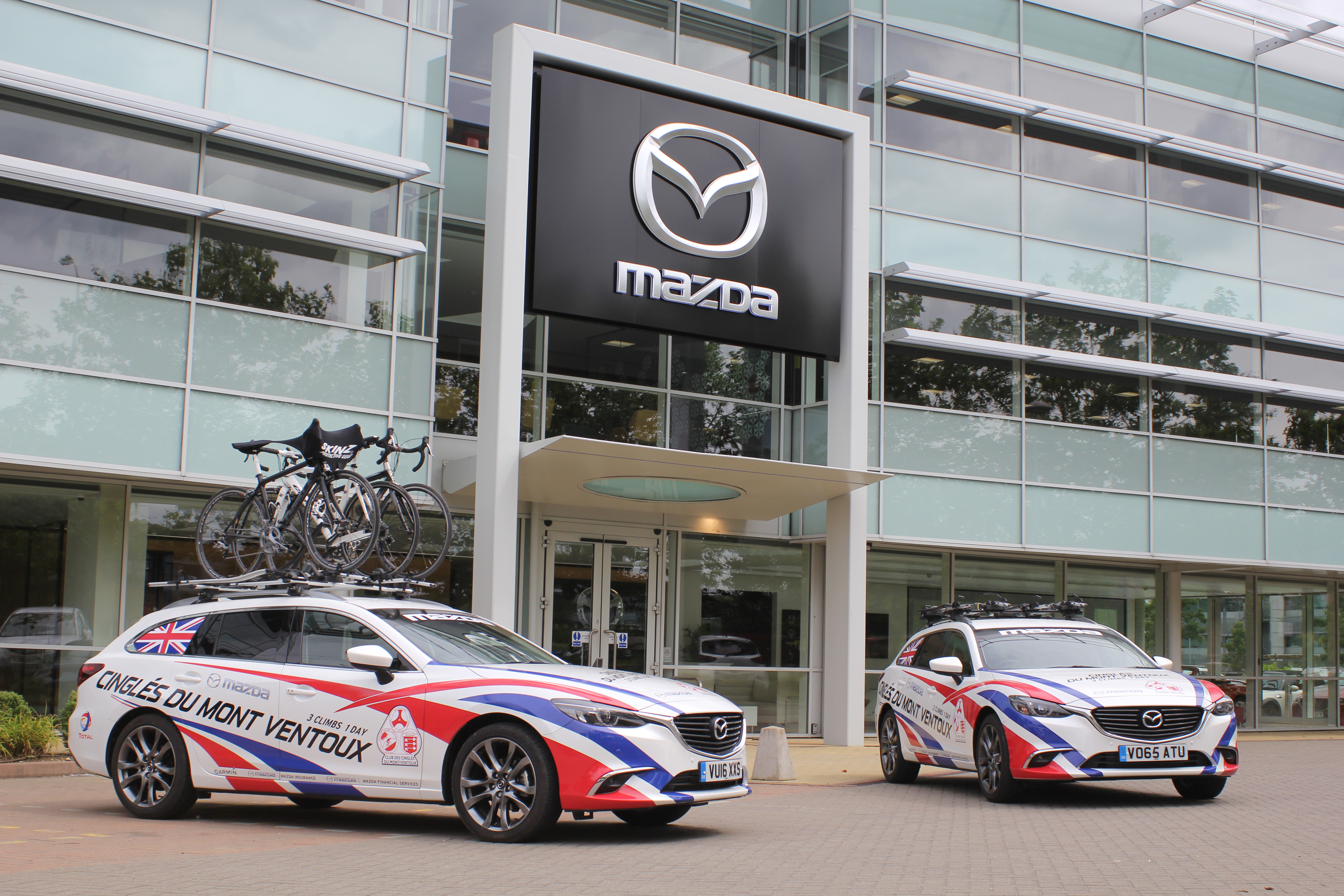 We take a look behind the scenes as four keen cyclists from Mazda UK and a group of friends face up to one of the toughest challenges in cycling: The Cingles du Mont Ventoux.

Ask most keen cyclists to name the toughest and most famous section of climbing tarmac in Europe and the chances are most of them will say Mont Ventoux. Rising to over 6,000ft above sea level, the twisting and torturous routes to the top of this mountain in Provence, Southern France are infamous as some of the hardest sections of the Tour De France. 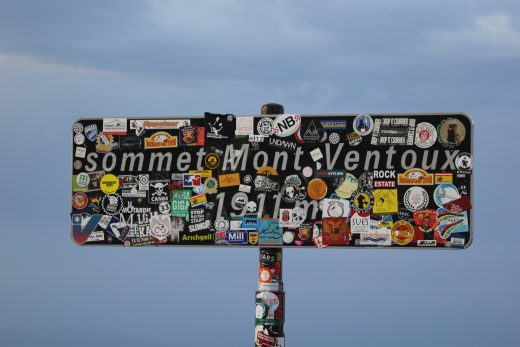 Famed for the barren landscape at the summit, energy sapping high winds and extremes of temperature, the three routes to the top are a magnet for cyclists – with the ultimate challenge being an attempt to ascend all three in one-day. 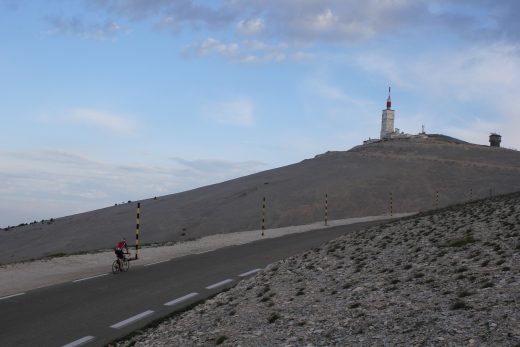 And that’s exactly what a team of four riders from Mazda UK set out to do last month. Joined by eight friends and transported in a trio of liveried Mazda6 Tourers, this brave group of UK riders set out to conquer the mountain – not once but three times in a single day. David Wilson-Green, Aftersales Director of Mazda UK explains just how tough it was.

“Known as the Giant of Provence, if you are a keen cyclist, like me and colleagues Richard Whittam, Paul Crisp and David Elphick, then it’s likely this epic mountain is on your bucket list. Having already completed the three ascents over three successive days on a previous trip, our Mazda team decided to join the Club des Cinglés du Mont Ventoux – a fellowship formed of the elite few who’ve cycled all three road routes to the summit in a single day.

Climbing the massive limestone outcrop of Mont Ventoux once needs little more than determination and a few hours in the saddle every week to strengthen legs and get used to lactic acid build up. However, tackling three climbs in one day requires a lot more commitment. Efficiency of effort is key, and much like Mazda’s SKYACTIV engineered cars, losing weight is crucial – so both I and my bike had to be as light and strong as possible.

The best advice I was given for the Cinglés attempt was to get loads of time riding on hills and lose 10% body weight. At 67Kg in January, I thought I’d struggle losing weight and others in my group might need a little encouragement. I did drop to 63Kg with the increased training and utilised Mazda’s gram strategy on my bike to remove as much weight as possible which undoubtedly helped. 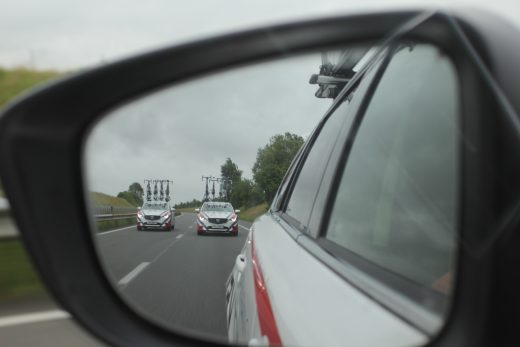 Our group of twelve set off for Mont Ventoux in three identical Mazda6 Tourers, fully loaded with bikes on the roof and kit in the boot. Covering over 1,100km on the days’ drive south we arrived unflustered at 6pm with everyone still fresh enough to get out on the town for dinner and a beer. 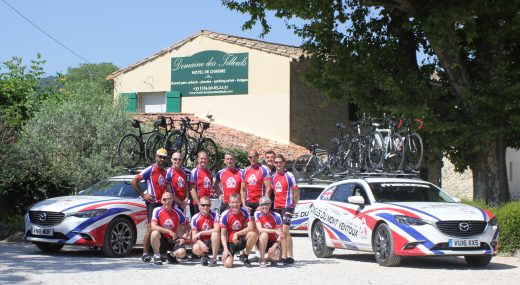 However, all minds were still on the challenge ahead, especially the weather, which has to be a serious consideration if you attempt Mont Ventoux. The upper slopes are so exposed there’s nothing to protect it from howling winds that are in excess of 90km/h for over 240 days per year. The Tour de France stage this year had to be cut short for that very reason.

Whether you aim for one climb in a day or all three, don’t underestimate the effort required from your legs going up and your brake blocks coming down, although we were fortunate to have one of the Mazda6’s checking up on riders, passing fresh supplies should they be needed and helping with punctures. 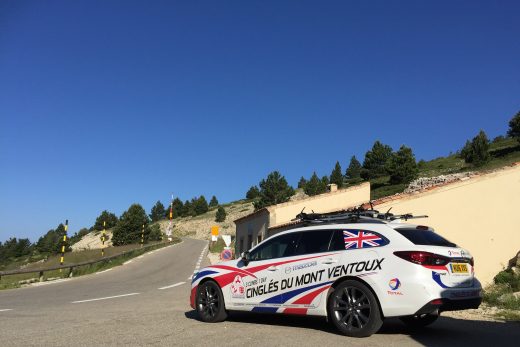 Our Cinglés attempt began with a 3am alarm call and after eating we loaded our bikes onto the Mazda6s in the dark and headed to the Bedoin start point. By 4.50am the nervous anticipation was building and still in the dark, we begin with a leisurely incline passing houses and vineyards until a sharp left turn at Saint-Estève takes us into the forest and a significant increase in gradient. 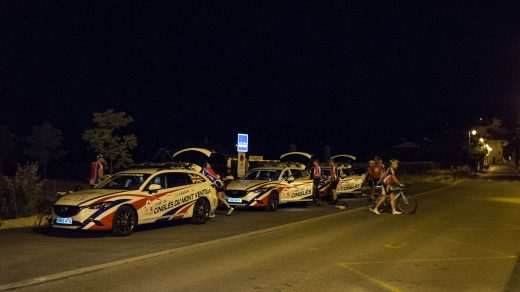 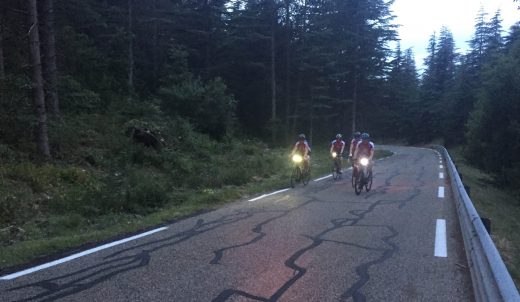 Emerging at Chalet Reynard an hour later with daylight gradually dawning, a short lived flat section provides a brief respite before the gradient steepens again for the last 6km. The vista opens up and the road ahead hugs the upper slopes, climbing with snake-like curves against a parched barren moonscape. Seeing the top is both a blessing and a curse. 6km looks close enough but grinding away in bottom gear on a bike means progress is painfully slow. Reaching the top around the last steep hairpin provides a sense of elation, knowing that a Tour de France mountain climb has been conquered. Being so early means we have the place to ourselves. 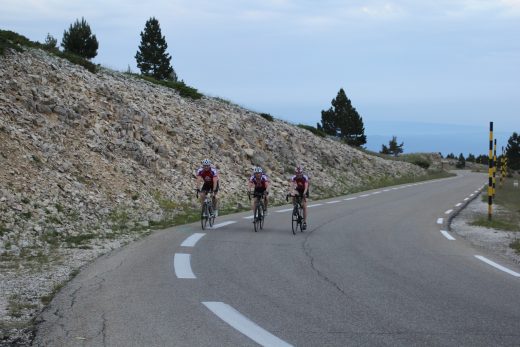 We started early from Bedoin for a number of reasons. It helps avoid the heat of the day and means we can descend to Le Domaine des Tilleuls, our hotel in Malaucène, for a fantastic breakfast and it’s quite magical cycling in an eerie dawn light through the forest. We also have an empty road for our first descent, down the other side of the mountain. It is interesting to see how the facial expressions change from pain to exhilaration, and even the sharp handling Mazda6 had to work hard to keep up with 11 cyclists on a mission to be the first down a 21km mountain descent. 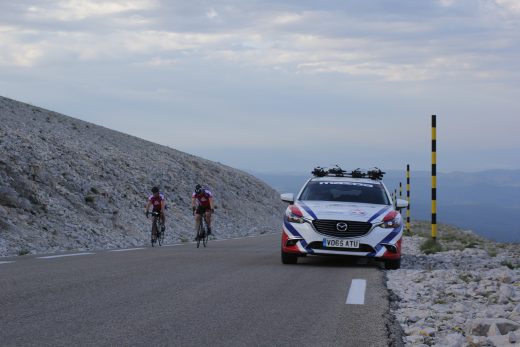 With spirits high at breakfast we ate too much, which made the second climb from Malaucène tougher on the stomach as well as the legs. With our hotel perfectly located within 100m of the start, it meant there was no easing back into the ride. While less famous, the Malaucène climb does share similar overall statistics to Bedoin, and some argue it’s harder. 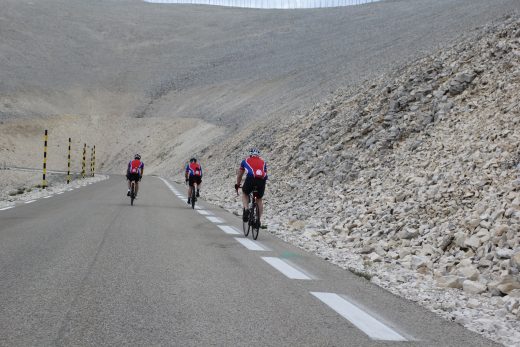 Winding up the northern face it’s more open and provides spectacular views. With the temperature reaching over 30cand the lactic acid building, a stretch break was very welcome. It’s at this point that the mental training has to kick in. It would be so easy to call it a day, roll back to enjoy the hotel pool, but we continued our slow grind upward. 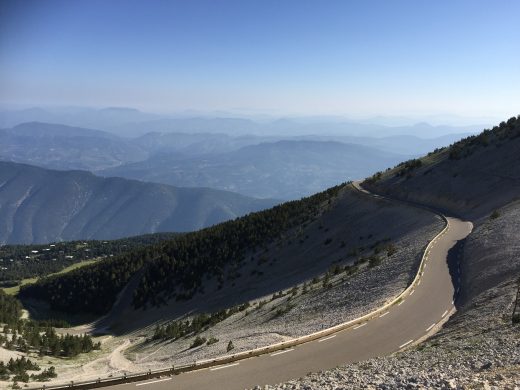 The last 2km opens up again to reveal the summit communications tower way above a near vertical wall of limestone scree, broken only by the road zigging-zagging ever upward. A few hundred metres from the top and the road kicks up again but by this time, scores of other cyclists have accumulated so a herculean effort was needed to look relaxed and nonchalant for the last push. The feeling of elation and jubilation at this point though can’t be under played. Whoops, smiles and punching the air was wholly acceptable. Midday and we had completed the two toughest routes. 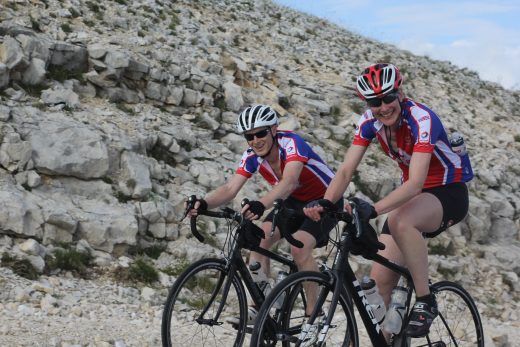 Fortunately, the descent to Sault is really enjoyable. It follows the same exposed route as Bedoin until Chalet Reynard then forks left and meanders down a shallower gradient through pine forest until it opens up into lavender clad farmland, offering not only a less aggressive ride but one with the most fabulous aromas along the way. 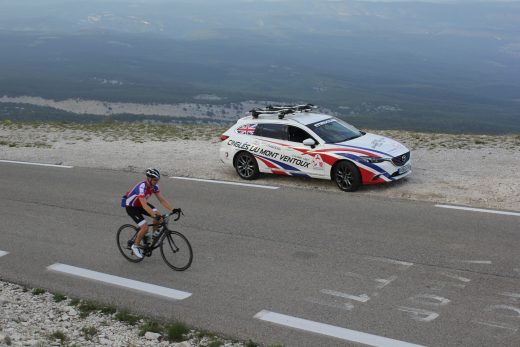 Sault itself is the prettiest of towns and is positioned on the opposite side of a valley offering views of purple lavender fields and the mountain top in the distance. Because Sault is situated about 300m higher and further away than both Malaucène and Bedoin it is certainly best ridden last. 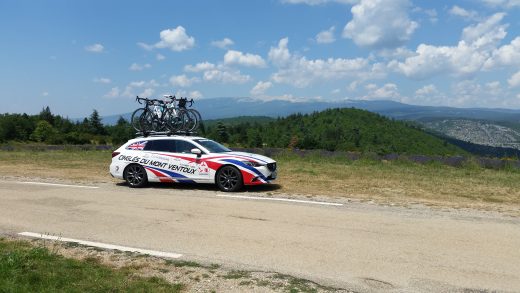 We departed through scented lavender fields and up into the forest. The relaxed gradient only steepens once re-joining the route from Bedoin, and despite the muscle torture, pride and exhilaration kept legs turning until the top once more. The steep descent back to Bedoin is the most dangerous and combining these winding roads with exhaustion only adds to the danger, plus being constantly on the brakes can also heat rims up so much that inner tubes can burst. Luckily, we had two such failures but no accidents. 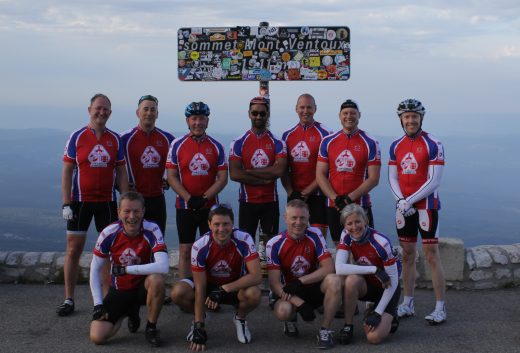 Elated and exhausted in equal measure, while celebrating back at our hotel we chatted with the owner and asked what Cinglés actually meant? He struggled to find the right words, but described a person in a straitjacket and then remembered the word ‘nutter’. Nutters of Mont Ventoux he exclaimed! It was no wonder we had so many people cheering us on.” 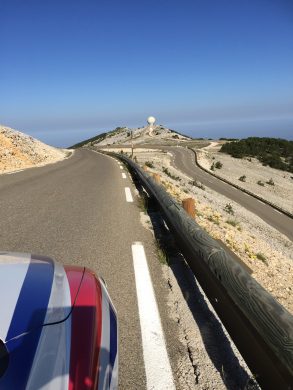