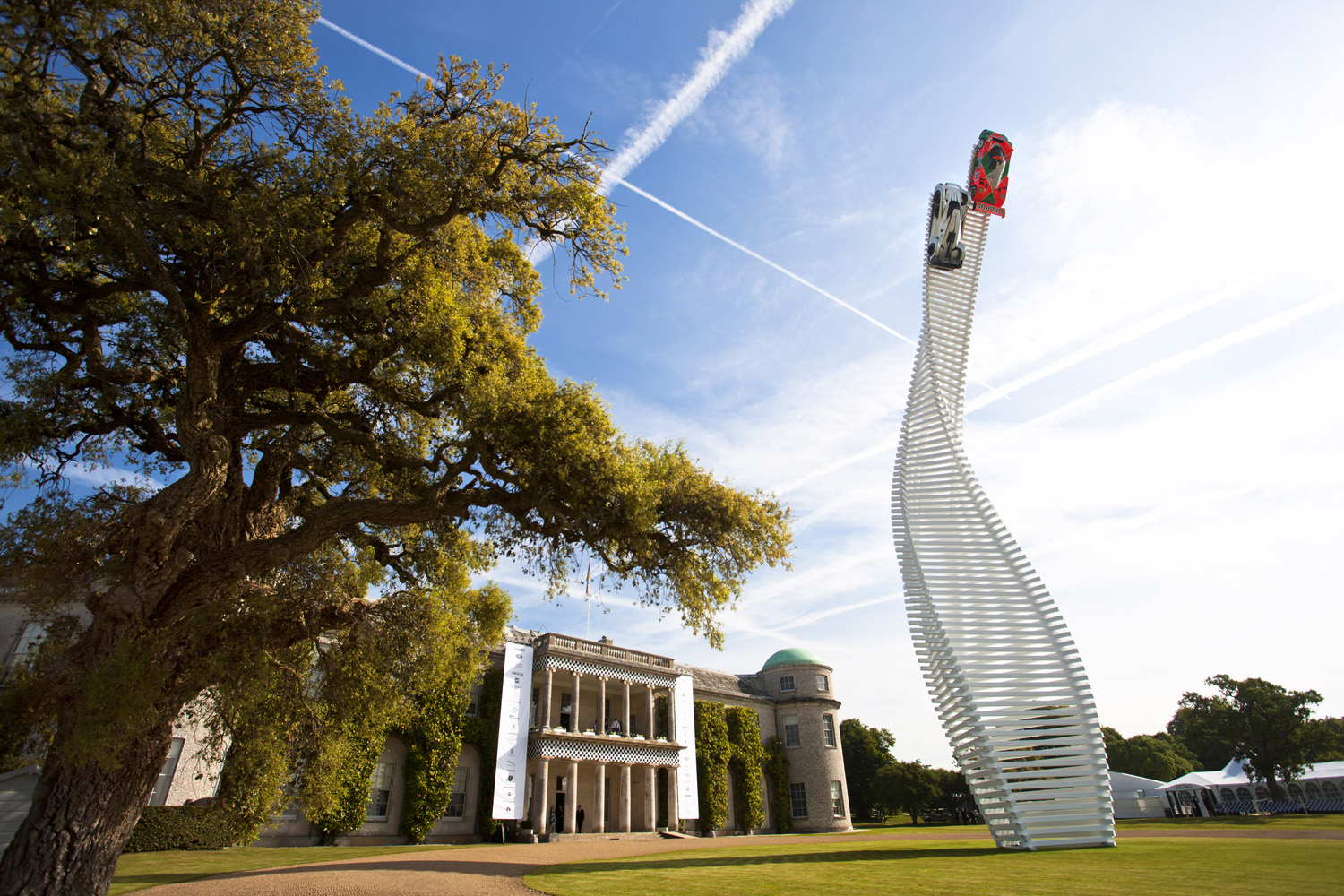 A spectacular 40-metre addition to the Sussex skyline celebrates Mazda’s racing heritage at this year’s Goodwood Festival of Speed.

Second in height only to the Chichester Cathedral spire, the Goodwood Festival of Speed centrepiece features two racing cars bursting out of the ground trailing spectacular twisted steel shapes.

Inspired by Mazda’s Kodo design philosophy of strength, beauty and tension found in the instantaneous movement of living things and the simplicity that reflects Japanese aesthetics, Gerry Judah’s clever interpretation of Kodo is a beautiful and simple form that expresses tension, lightness and movement that belies the complexity of the structure.

Stacked like matchsticks, 418 steel beams, each a different length and angle, turn the sculpture from right to left – hanging the cars over the spectators below.

Featuring 120 tonnes of steel that, put end to end, would stretch 1235 metres, the length of the Goodwood Hill Climb track, this is the most complex centrepiece yet.

“Usually,” commented Gerry Judah, “the one thing you never do with steel is to twist it, so this year we had an impossible challenge to find a way of corkscrewing the entire structure, and we succeeded with an elegant and graceful system that shows of the elegance and grace of the cars themselves.”

“When we first started talking about the central feature at Goodwood we wanted it to represent our brand through our design philosophy of Kodo,” said Ikuo Maeda, Mazda Executive Officer, General Manager Design Division. “Gerry has faithfully represented our brand in a striking and beautiful structure that is clearly Kodo. There is a lightness and strength to the structure, yet it gives the cars movement and energy, it is a sculpture that we are very proud to represent Mazda.”

The central feature celebrates Mazda’s motorsport heritage, a history that started in Europe in the late 1960’s to prove and promote its rotary engine in the tough environment of endurance racing.

Since then Mazda rotary engine cars have won 100 IMSA races; a class win in the Daytona 24 Hours; IMSA manufacturer and driver titles; the Spa 24 Hours; five class victories at Le Mans; two British Touring Car titles; and, most famously, Le Mans in 1991 with the 787B.

The two cars on top of the sculpture are the Le Mans winning Mazda 787B which took overall victory in the famous 24 hour race in 1991 driven by British driver Johnny Herbert alongside Volker Weidler and Bertrand Gachot. Mazda remains the only Japanese manufacturer to have won Le Mans 24 Hours and the only rotary engine to have won the famous French endurance race.

Named after the number 55 Mazda 787B that took victory in the 1991 Le Mans 24 Hours, the LM55 is both a homage to the dramatic proportions of the 787B and a vision of a futuristic sports prototype drawn with inspiration from Mazda’s KODO: Soul of Motion design philosophy.

Sharing the dramatic proportions of a Le Mans racer, the LM55’s sleek nose, sculpted wings and low rear-end deliver a uniquely dynamic shape that stays true to the KODO ethos of ‘beautiful form full of life’. A stunning addition to the West Sussex skyline, the pairing of 787B and LM55 on the Mazda Central Feature perfectly encapsulates the celebration of Mazda’s ‘Challenger Spirit’ in the racing legends of our illustrious sporting past, and the stylish and spirited cars of Mazda’s future.