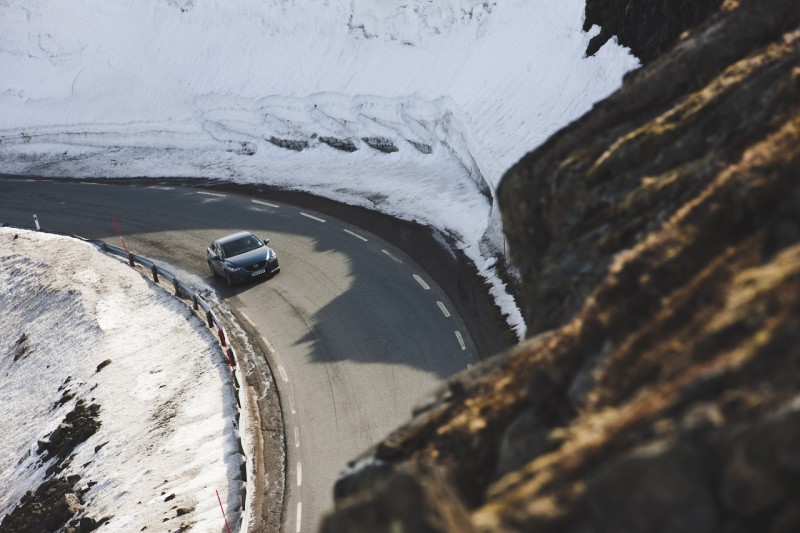 It’s a long way to go to prove a point. The point being to demonstrate that in the real world of traffic jams, high-speed gotta-get-there cruising and the carrying of stuff, a Mazda6 will get a lot closer to its official EU combined fuel consumption than most. Why? Because Mazda’s arsenal of SKYACTIV technologies is designed to provide better real-world fuel efficiency, and without undermining its cars’ long-standing, fun-to-drive character. Stop-start, a clever i-ELOOP system that charges the battery only when the car’s coasting or braking, a strengthened, lightweight bodyshell, air-calming aerodynamics and a highly advanced low-compression diesel engine are among the many advances that improve this Mazda’s economy.

And our long, long journey is about to prove that, or not. Over the next five days we aim to drive a Mazda6 2.2-litre 150ps SE-L diesel from Nordkapp, in Norway, to Tarifa, in Spain. These are the northern and southernmost points in Europe. Beyond Nordkapp, there’s nothing but bone-chilling Atlantic between you and the Arctic. And in Tarifa, it’s a short stretch across the Mediterranean to Morocco. Between the two lies the best part of 3500 miles, and a mission to see how many miles we can extract from every gallon passing through the Mazda’s fuel tank. So, an economy drive.

However, this is no ordinary economy drive, our car advancing so slowly that it becomes a traffic hazard. Instead, we’ve set ourselves the target of averaging 60mpg. That may not sound ambitious, but if your car has a trip computer, try zeroing it to discover just how difficult it is to maintain that average. For the record, the Mazda6 2.2-litre 150ps SE-L diesel records an official combined consumption of 72.4mpg in laboratory conditions. We, on the other hand, have two occupants, their luggage, often a photographer-plus-gear, a 20-litre jerrycan of just-in-case fuel and that racey average speed target.

Unsurprisingly, Nordkapp is cold. And wintry, which is why our Mazda will wear economy-denting studded winter tyres until Sweden. It’s bleak up here and empty too, but the greys, black, white and brown of lakes, mountains, snow and winter-deadened grass are beguilingly beautiful. Plus it provides a fine test of the Mazda’s satisfyingly agile handling, too. As we plunge south twig-like vegetation appears in Finland, followed by pine trees – and sun – in Sweden. Day one’s result: 588 miles at a 56mph average, and 54.1mpg.

Day two is spent entirely in Sweden with the realisation that this country is much bigger than thought. We also discover that if you’re ultra-careful, you can go 729 miles on a single tank. That’s on Sweden’s low-traffic roads – on day three, we leave for Denmark via a Baltic ferry to reach busy, high-speed Germany, Holland and Belgium. Belgium seems carpeted with roads and jam-prone traffic that we tangle with on day four, our consumption dropping from 58.0mpg to 57.1mpg, although our average speed rises to a tantalising 59mph.

That’s about the only tantalising thing on the ultra-dull autoroute from Paris to Bordeaux, whose rain-drenched tedium totally undersells the beauty of France. Day four’s result: 57.8mpg, 60mph, and three minutes eight seconds of engine-off silence in Belgian jams.

Day five is enjoyed amid sun-soaked Spain that mixes mountain climbs with majestic sweeps of motorway and scenery of great beauty, helping our last day pass fast, not least in anticipation of the final result. Which is 3466.3 miles and 56.8mpg at 60mph. We correct the tiny trip computer error while basking in the sight of the Mediterranean and Morocco, to arrive at 56.5mpg. That’s genuinely impressive for a brisk, four-door saloon – especially one that’s a solidly entertaining drive. Never mind our extravagant, Cape-to-Cape drive either – this is a number that really is achievable. 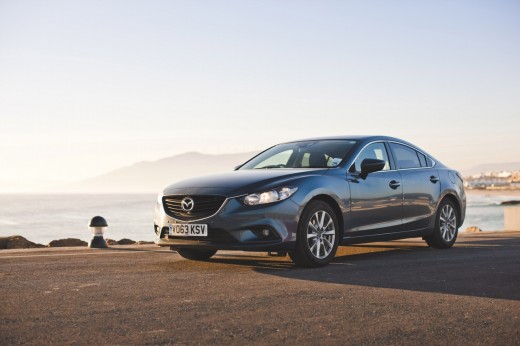