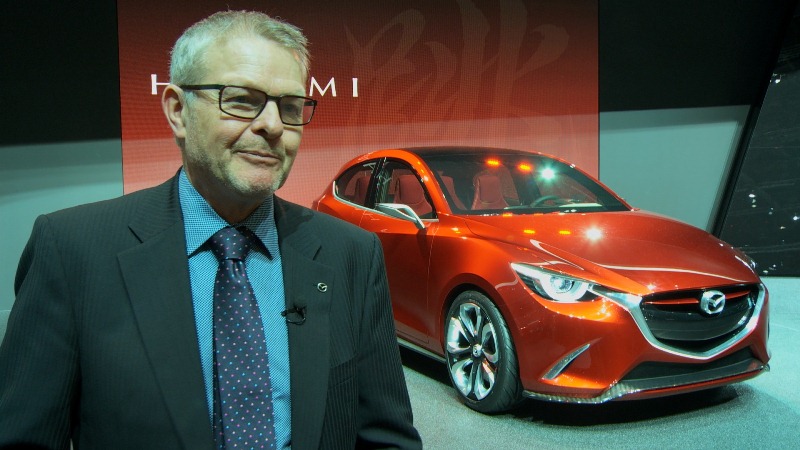 Although Hazumi is not a production car, it previews Mazda’s next B-segment model. The press have declared it a smash hit, so to discover the secrets of its success, Mazda Social caught up with the men behind Hazumi and the man who, like many Mazda fans, can’t wait to get his hands on the final production model.

Peter Birtwhistle is the chief designer for Mazda Europe. With 25 years experience at Mazda, he says the Hazumi shows where the Japanese car company wants to take the next generation Mazda2, with more ‘emotional design’. But, he said, that isn’t easily accomplished: “It’s difficult with a small car because you don’t have such a big playing field to get these shapes in the bodywork. And you have to be careful that it doesn’t get too fussy. But I think we’ve done a good job putting attitude and motion into the design of a B-segment car.”

Birtwhistle believes the Hazumi has an edgy, sporty feel about it and says it’s a deliberate move to attract interest from younger drivers. Since it separated from Ford there’s a ‘new attitude’ at the company, he explains. 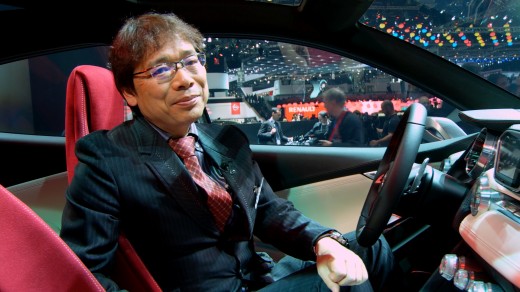 Beneath the Hazumi’s bonnet is an all-new SKYACTIV-D 1.5-litre diesel engine that will be fitted to B and C-segment cars. Development was led by Kenichiro Saruwatari, the vice president in charge of Mazda’s European research and development centre in Germany, who previously led the Mazda3 project. “Small, efficient engines are very important for the European market. We began development after the SKYACTIV-D 2.2-litre engine and used the same approach and engineering solutions to improve combustion and make it as efficient as possible,” he says.

“Light weight components and low friction materials contribute toward its good fuel economy,” says Saruwatari. He adds that the latest generation of turbocharger with variable geometry vanes improves the volume of intake air and gives more power and torque throughout the rev range.

Efficiency is one thing but will it be fun to drive and therefore true to Mazda’s philosophy? “I am sure that everybody who drives it will enjoy it; they’ll have a smile on their face,” says Saruwatari. 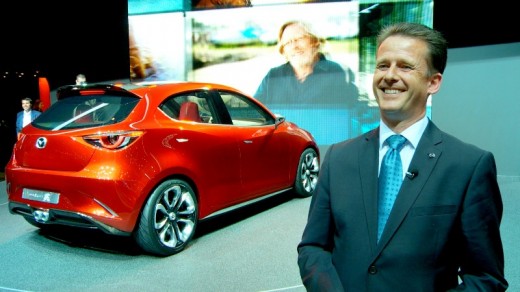 So if the HAZUMI concept goes into production, who will buy it and what will demand in the UK be? Jeremy Thomson, managing director of Mazda UK, has every confidence that the production version of Hazumi will be a success: “It would be entering into the largest sector of the new car market,” he points out. “And there is a trend toward downsizing, as small cars gain all the technology and luxury of larger, more expensive models.”

Thomson thinks its ‘terrific design’ will easily win over the typical B-segment car buyer. “They are looking for something a little different that stands out. It needs to be economical and have low CO2 emissions, but at the same time be really fun to drive. If you blend all these together you have a car that resonates with British drivers.”

Another key to building and selling small cars in today’s market is technology. And the Hazumi offers a tantalising glimpse of the future, with proactive driver aids and the latest version of MZD Connect, the smartphone connectivity technology.

Summing up, Thomson suggests the Mazda Hazumi could produce a car that has appeal far beyond the traditional audience for superminis: “I can see drivers migrating from a lot of different segments to come to the production version of Hazumi,” he says.