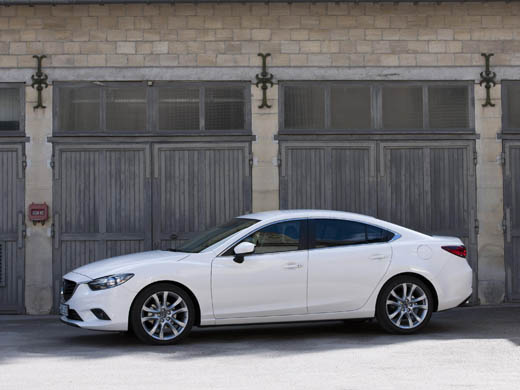 MazdaSocial looks at Mazda’s breakthrough SKYACTIV technology, which has meant that engineers have been able to deliver upper medium-segment leading environmental-friendliness without resorting to the smaller engine displacements of some rivals.

Notably with diesel power, some manufacturers have introduced smaller engines into their CD segment model ranges in a bid to win over company car drivers searching for low emission, fuel-sipping models. However, with models such as the Ford Mondeo and Volkswagen Passat the compromise is a loss of power and therefore performance.

Indeed, the ‘low power’ version of Mazda’s 2.2-litre SKYACTIV-D offers 150ps on tap, the lowest CO2 emissions figure in the class of 108g/km and 67.3mpg with all three numbers significantly better than those offered by the 1.6 Mondeo TDCi and 1.6 Passat TDI (see chart below).

Diesel sales are expected to account for perhaps as many as 90 percent of all-new Mazda6 company car CD segment sales.

Mazda Head of Fleet Steve Tomlinson said: “The all-new Mazda6 is the no compromise choice for company car drivers. They can have power, performance and driving fun with low emissions and excellent fuel economy due to our SKYACTIV technology. That cannot be obtained from rival manufacturers who have resorted to smaller engine displacements in pursuit of emission and fuel economy improvements.”

“On top of all that company car drivers’ save themselves money with the 2.2-litre SKYACTIV-D 150ps engine powering the all-new Mazda6, having the lowest CO2 emissions figure in the class. That also translates into Class 1A National Insurance savings for employers.”

The all-new Mazda6 will be the second of the manufacturer’s new generation models to be launched with SKYACTIV technology following the arrival earlier this year of the all-new Mazda CX‑5.