by: Mazda UK in Mazda and you 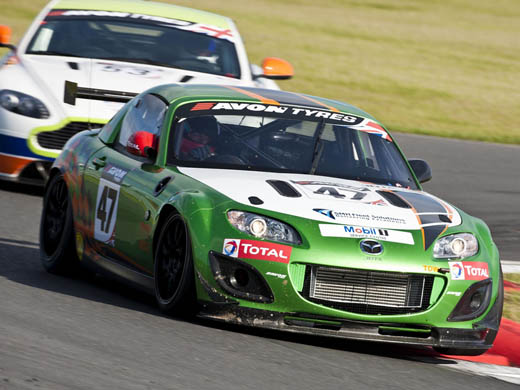 Mazda UK entered the Avon Tyres British GT Championship this year to further develop the MX-5 GT that successfully contested the 2011 Britcar Production GTN Championship and once again challenge conventions by taking on long established GT4 race cars, Aston Martin, Ginettas and Lotus in the Avon Tyres British GT Championship. Although 2012 was very much a development year, the first outing at the Nurburgring demonstrated the potential of the car with a fourth and fifth in class.

“On the track or on the road, convention tells us that the compact Mazda MX-5 should not be rivalling the likes of Aston Martin or Lotus in terms of sheer performance, but here is the evidence that we have a credible alternative to the more established performance marques,” commented Jeremy Thomson, Managing Director of Mazda UK.

Brands Hatch in June brought the first podium finish for the team taking third place and ending the dominance of Ginetta and Lotus.

Earlier this month at Snetterton, the SMH Fleet Solutions, Mazda Financial Services, Total Lubricants and Jota Aviation sponsored Mazda MX-5 GT4 finished on the podium again with a second place, demonstrating that this car is a real title contender.

Built by Jota Sport, the Mazda MX-5 GT4, weighing in at 1,000kg,will cost £125,000, excluding VAT, and is now available to order for the 2013 season. The car will benefit from further development during 2012 and will be a fully homologated car for GT4 racing.

Powered by an MZR two-litre turbo unit, the MX-5 GT4 produces 320bhp and will come ready to race. Each car will benefit from technical assistance from Jota and an extensive parts supply for those unforeseen racing accidents.

Inside, the MX-5 GT4 has a carbon fibre dash and centre console, Pi Omega D2 display and data logger and a six speed sequential gearbox with paddle shift as standard.

The Mazda MX-5 GT4 will be eligible for numerous domestic and continental GT & GT4 championships throughout the world.

“We have spent the season getting the car to the front of the field,” commented Sam Hignett, Managing Director of Jota Group. “We started from the base of last year’s GT car and set ourselves the aim of finishing the 2012 season with a car that would be competitive in GT4. At this stage in the season we are very pleased with the progress and believe any team buying the MX-5 GT4 will have a potential winner ready to race.”

“The car is an easy car to race and would even suit track day enthusiasts. We are still developing the car, but we are now at a point that we can offer this car to customers safe in the knowledge that it is going to be a front runner in any GT4 field,” concluded Hignett.

The Mazda MX-5 GT4 race car is the latest product of a process which began more than 20 years ago after Mazda took the brave decision to re-invent the lightweight sportscar when all other brands had abandoned the sector. Driven by the desire to replicate the ‘oneness between horse and rider’, Jinba Ittai, by building a strong bond between car and driver, Mazda created the MX-5 for the 1989 Chicago Auto Show – and a legend was born.

Today, the MX-5 remains the world’s best-selling two-seater sportscar and, over three generations, has developed into a vehicle that is more capable, more economical, better equipped and safer, without losing touch with its original core concept. It is still fun-to-drive – an attribute endorsed by more than 4,400 MX-5 Owners Club members in the UK and 10,000 across Europe.

While MX-5 sales are heading towards their first million, the popularity of the sportscar for grass-roots motorsport has seen packed fields competing in national championships around the globe, with races in the USA, Spain, Portugal, Netherlands, Sweden, Switzerland and the UK.