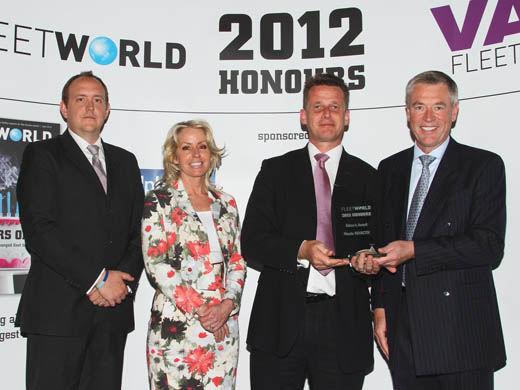 The Editor’s Award in the 2012 Fleet World Honours was presented at a special ceremony held at the Royal Automobile Club in London yesterday (Wednesday, May 16).

The benefits of SKYACTIV technology are seen in a range of new fuel-sipping, emission-busting engines powering the Mazda CX-5, but extend to also include improved aerodynamics, vehicle weight reduction, chassis developments and new manual and automatic transmissions.

SKYACTIV technology, which has as its three key attributes economy, safety and performance, promises to redraw the automotive landscape as it is gradually rolled out across the Mazda line-up with the launch of new models.

Steve Moody, Editor of Fleet World and Chairman of the awards’ judging panel, which also included members of the publication’s editorial team, said: “Mazda’s brilliantly innovative SKYACTIV drivetrain has been in development for a few years, and now it is here, proving itself on the road to be every bit as good as we thought. With low CO2, Euro6 emissions (on diesel models) and good power outputs, SKYACTIV will give Mazda a renewed vigor in the fleet market.”

Crucially SKYACTIV technology, which is designed to achieve the seemingly conflicting goals of driving pleasure plus environmental and safety performance without compromise, sees Mazda staying loyal to petrol and diesel engine technology.

Jeremy Thomson, Managing Director for Mazda UK collected the award and said: “The arrival of the CX-5 marks the dawning of a new era for Mazda with the arrival of SKYACTIV technology. We are naturally delighted that its industry-leading credentials have been recognised by Fleet World.”

“The range of SKYACTIV technologies allows Mazda to build petrol and diesel cars that deliver class-leading fuel consumption and CO2 emissions without compromising performance or handling. This significantly reduces the cost of motoring for fleets and company car drivers and responds to the environmental needs that are now a key factor in corporate decision-making.”

“By introducing SKYACTIV technology to all sixth generation Mazda vehicles, starting with Mazda CX-5, everyone can drive an environmentally friendly car, not just those who are prepared to pay the price premium charged by other brands.”

The 2-wheel drive (2WD) petrol engine range gives drivers a choice of SE-L, SE-L Nav, Sport and Sport Nav trim levels. Emitting 139g/km of CO2 and returning 47.1mpg on the combined cycle, no competitor models can match such figures given the available power.

Diesel engine performance – 2.2-litre powerplants with a choice of SKYACTIV-D 150ps or 175ps engines with 2WD or all-wheel drive (AWD), manual and automatic transmissions and four equipment levels (SE-L, SE-L Nav, Sport and Sport Nav) – is similarly unmatched in terms of both CO2 emissions (from 119g/km) and fuel economy (from 61.4mpg on the combined cycle).