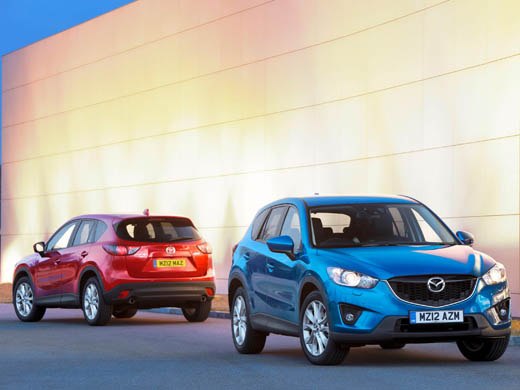 Data from future residual value experts at CAP reveals the soon to launch CX-5 will retain an average 36-39 per cent of its value across the petrol and diesel range at the benchmark three years/60,000 miles.

Forecasted residual values for the petrol engine range lead the way against rival marques. For example, the entry-level SKYACTIV-G 2.0-litre petrol 165ps engine delivering 47.1mpg and CO2 emissions of just 139g/km has a forecasted residual value of 39 percent in SE-L trim beating competitors including the Honda CR-V, Nissan Qashqai, Volkswagen Tiguan and Toyota RAV4 and equal to the Audi Q3.

With a P11D value of £21,220, the model depreciates by only £13,050, which is significantly less than many competitor models including the equivalent and more expensive Audi Q3 and Volkswagen Tiguan.

Diesel models are expected to account for up to 75 per cent of corporate CX-5 sales, particularly due to class-leading CO2 emissions (from 119g/km) and combined cycle fuel economy (from 61.4mpg).

Over the benchmark period the model depreciates by only £14,340 which is less than many models including the significantly more expensive BMW X1 and Audi Q3 rivals.

Jeff Knight, editor of CAP future residual value guide Monitor, said: “Crucial for a car to be a success in the used car market are low emissions, excellent fuel economy and high specification – with the Mazda CX-5 diesel delivering up to 17mpg better than some of its rivals – which includes dual zone climate control, Bluetooth® and iPod connectivity, the CX-5 is expected to be very popular.”

“The Mazda CX-5 therefore has many key advantages versus the competition and whether choosing a petrol or diesel model, those benefits are available in a vehicle that performs well on the road.”

Similar data for the entry-level SKYACTIV-D 2.2-litre petrol 150ps SE-L also highlights that the model makes significant financial sense for budget-conscious fleet decision-makers. KWIKcarcost calculates the model will cost 48.47p per mile to run over the benchmark period putting it ahead of rivals including the BMW X1, Hyundai ix35, Ford Kuga, Toyota RAV4 and Honda CR-V.

Mark Jowsey, Director Manufacturer Liaison at KWIKcarcost, said: “Mazda has taken time to develop SKYACTIV technologies with the key benefit that it is focused neither solely on diesel nor simply on engines. SKYACTIV embraces light-weight technologies and reduced weight also allows the CX-5 to offer more space than many direct competitors.“

“High efficiency low-emission 2.2-litre diesel (from 119 g/km) or 2.0 petrol (139 g/km) engines, with a choice of diesel power outputs, plus two or all-wheel drive and manual or auto transmission is an impressive line-up guaranteed to attract corporate as well as retail buyers.”

“The crossover and SUV sectors are very important in the UK and CX-5 is well finished, good looking and sensibly equipped so it is sure to be an easy success!”

Mazda UK Head of Fleet, Steve Tomlinson added: “The CX-5 will shake-up the burgeoning compact SUV crossover segment. The revolutionary SKYACTIV technology delivers major fuel economy and CO2 emission advantages versus competitors across both petrol and diesel variants. Coupled with low levels of depreciation, the CX-5 should be on every fleet operator’s choice list as it makes financial sense.”