by: Mazda UK in Mazda and you, Mazda Range, Mazda2 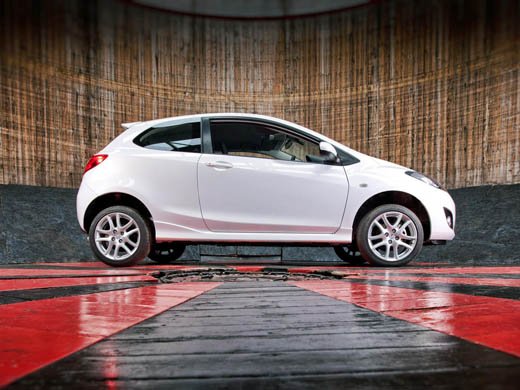 Wall of Death. Probably not the three best words to be running through your mind as you floor the throttle and head out on to the track, but we like the sound of it here at MazdaSocial. You want words like victory, pace and skill to fill your head. Not Wall of Death. But then this is track like no other. It measures just 31-foot in diameter and it’s 85 years old. It’s made almost entirely of wood, and it’s redolent with the tang of oil, sweat and fear. Oh, and the track walls are completely vertical.

The Mazda2 slowly edges up and away from the horizontal base of the Wall of Death and onto its upright walls. The right front and rear tyres chirp, momentarily slip, and then grip as the driver’s side of Mazda2 rides up onto the edge. Behind the wheel, Dynomyte Dave guns the supermini’s punchy 102ps 1.5-litre engine. With a burst of speed the Mazda2 flies up onto the wall, all four wheels leaving the floor. Time to go vertical on the Demon Drome Wall of Death…

The Demon Drome is the world’s oldest operating Wall of Death. It was built in America in late 1927, at the height of popularity for these adrenalin-fuelled vertical raceways, before being shipped over to Britain by Pat Collins Funfairs shortly after construction was completed. The bespoke wooden structure was then sold on and eventually ended up as an attraction in Skegness where it played to audience until the early 1980s.

The Wall of Death enjoyed a new lease of life when it was rebranded the ‘Motordrome’ and travelled around the country until the turn of the century when it was packed away in storage and forgotten. It was rescued and revived by Cornwall-based ‘Dynomyte’ Dave Seymour and his family who completely refurbished the historic wooden track in a meticulous three-year project, christening it The Demon Drome in the process.

Dynomyte Dave, his son Duke and daughter Alabama look completely at home circling the Demon Drome on their 1920s Indian Scout motorcycles. They make dealing with the 4g force that pools blood in their legs and gives them tunnel vision while hurtling around the wall look like an absolute doddle. They can ride their motorbikes one-handed, standing up, side-saddle and even blindfolded. But a car is something entirely different.

The concept behind the feat of bringing together the Mazda2 and the Demon Drome is simple – it takes Mazda’s convention defying approach to the ultimate level. In this case that level is perfectly vertical. The key to any success on the wall is a combination of low weight, agility and perky performance – qualities the lithe and effervescent Mazda2 has by the truckload. Unsurprisingly, there was little in the way of preparation needed.

The Mazda2 – a flagship 1.5-litre three-door Sport model – was handed over to Kent-based Jota Sport, the same celebrated motorsport outfit that also developed the race-winning MX-5 GT that currently campaigns in the British GT Championship. It’s ace technicians removed the seats and installed a grippy driver’s bucket chair with full race harness. Simon Cotterell, one of Mazda’s own technicians, was then on hand at the track to deactivate the Mazda2’s sophisticated electronic stability system and dual front airbags.

The front foglamps were also removed to allow more flexibility in the bumper and the supermini’s MacPherson strut front and torsion beam rear suspension was fitted with uprated bump stops to handle the incredibly high compression rate – at least twice the force of gravity – as it hurtled around the wall’s diameter. Everything else about the car was completely standard. No chassis gimmicks, no electronic trickery.

With Dynomyte Dave behind the wheel – and his son Duke Seymour standing at the centre of the track to guide him – the Mazda2 begins a slow circle of the track, it’s right front and rear tyres flirting with the vertical wall. Dynomyte Dave feeds in more power and the Mazda2 begins to rocket around the base of the Demon Drome, two wheels on the vertical, two on the horizontal. The driver’s side of the car seems to cock its eye upwards and with another perfectly timed and aggressive burst of speed the Mazda2 suddenly launches itself up the vertical wall.

The reinforced wooden structure bends and groans as it takes up the load as the car rises higher and higher up the 16-foot vertical wall until it reaches the centre of the track, rocketing round the round at dizzying speed and lapping the Demon Drome every two-and-half seconds. All within an incredibly tight diameter that’s tighter than the car’s own 9.8-metre turning circle. No doubt the original builders of the Demon Drome never envisaged their track still entertaining crowds 80 years into the future – and with such a modern twist.

Responding to the roar of spontaneous applause that instantly fills the track, Dynomyte Dave raises his arm triumphantly out the window and waves at the cheering crowd. He rockets around the Drome a few more times before bringing the Mazda back down to the horizontal. “That was incredible. Just amazing – I’m so stoked!” says Dynomyte Dave at the end of his ground-breaking run. “It was a bit tricky getting the Mazda up onto the vertical, but once it was there it was rock steady. Great fun. But I don’t think I’ll be doing it again. Not for a long while…”