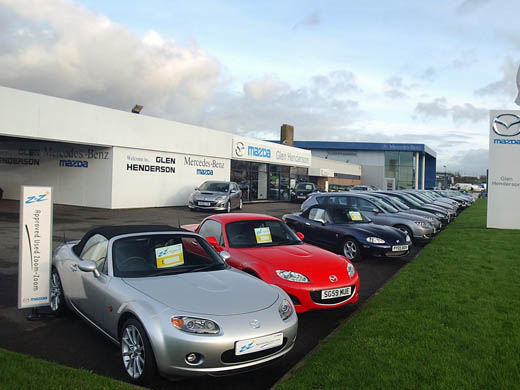 It’s business as usual for customers and staff at Borders Cars in Ayrshire, one of the leading motor retail groups in Cumbria and South West Scotland. The group has acquired the Glen Henderson franchises following the retirement of 79-year-old Mr Henderson. The deal includes the recently-opened Ayr, Scotland, Mazda dealership. This was the first Mazda dealership in Ayr and last year it won the Motor Trader New Dealership Award.

Mazda Ayr becomes Borders Cars’ fourth Mazda outlet. The acquisition of the Glen Henderson business is expected to provide long-term stability since it provides Border Cars with a very large market area covering south-west Scotland and north-west England.  “This is great news for Mazda customers in Ayrshire,” said Brett Hague, Mazda UK’s Senior Manager, Franchising and Network Development. “Glen Henderson has done a first class job for Mazda over the last couple of years; in fact, Mazda’s market share in the region has been more than four times the national average. Now, with Borders Cars adding Ayr to its well-established Mazda portfolio we have another experienced and well-respected company who, I’m sure, will help the Mazda business grow even further.”

Borders Cars, founded in 1977 by Mike Fusco, already has Mazda dealerships in Dumfries and Carlisle and last year added a third Mazda site in Workington following a £3 million investment. The company has an uninterrupted history of growth; annual turnover is in excess of £75 million and it employs 234 staff.

Gordon Burt, Mazda UK’s Business Manager for Scotland added: “When Glen Henderson made the decision to retire and sell the business, he chose a strong family business with the same customer service ethics as his own. The staff between them has many years of Mazda service and each member of the team is looking forward to working for the new owners Border Cars under the leadership of Dealer Principal Calum Watson and Border Cars’ Owner Mike Fusco.”

Calum Watson, who helped launch the Mazda dealership in Ayr for Glen Henderson in 2009, returns to run it for Borders Cars. “It’s a great business and a great team of people looking after Mazda customers in Ayrshire.  It will be ‘business as usual’ for Mazda customers and staff. We have a huge opportunity with Mazda continuing the success Glen Henderson has already had in the area,” he said.

Gordon Burt, Mazda UK’s Business Manager for Scotland commented: “Glen Henderson has produced strong volumes for Mazda in the past two years and was named “New Dealer of the Year” by Motor Trader in 2010. The acquisition of the franchise by Border Cars consolidates Mazda’s strong position in Scotland, which is consistently more than double the national market share for Mazda across other areas of the UK.  This success is due to the strength of the Mazda dealer network with loyal, long term partners covering every geographical point in Scotland, making it easy for customers to buy and sell a Mazda.”

“The Scottish dealers are enthused about the new 6th Generation models due to launch this year. They are well prepared for the SKYACTIV models starting with CX-5, venturing into segments we’ve never been in before.”