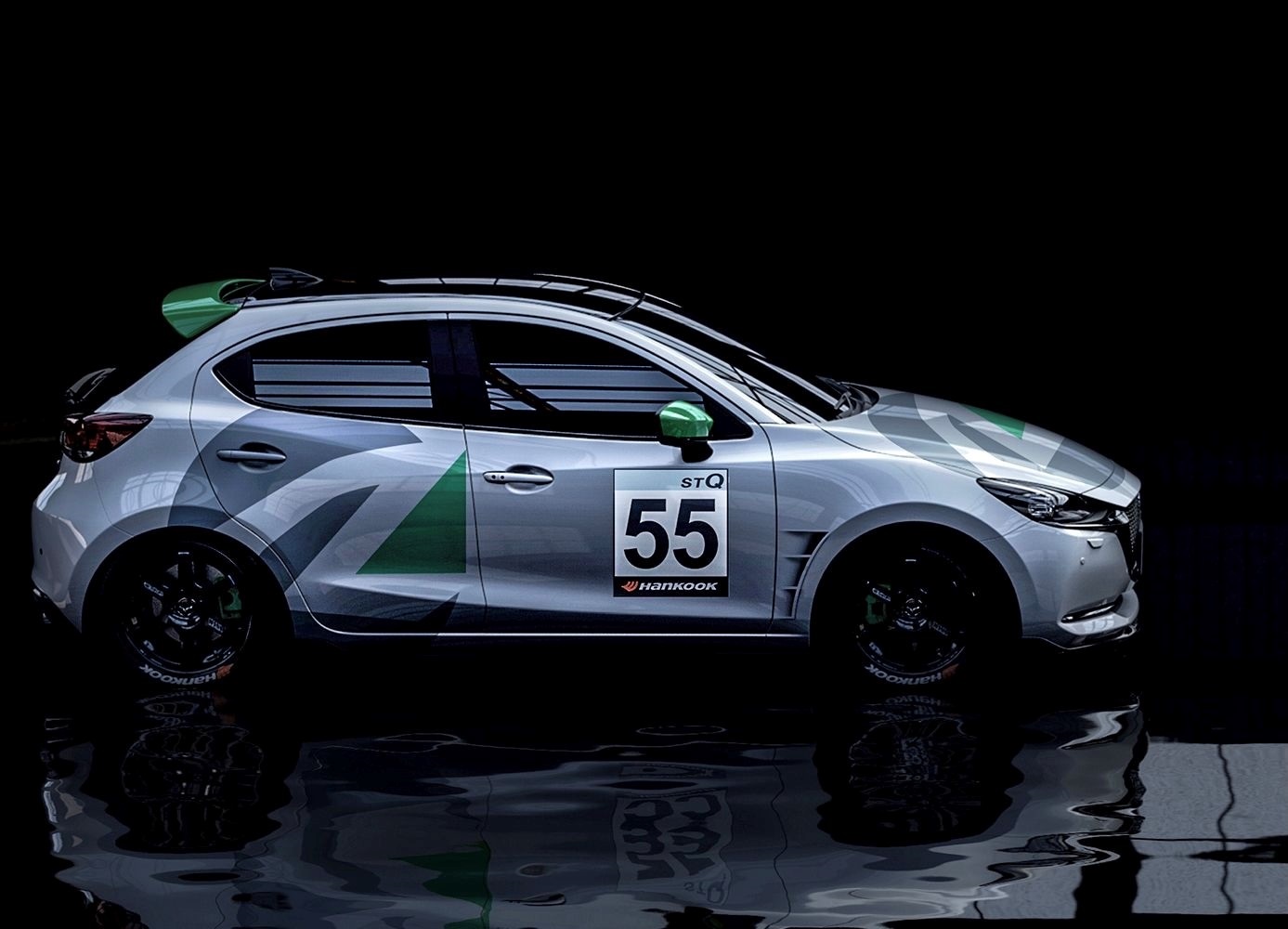 Mazda Motor Corporation will compete in the Japan’s leading domestic endurance racing series with the Mazda2 Bio concept. The Mazda2 Bio concept is a Skyactiv-D diesel powered Demio/Mazda2 production based race car that will be fueled by a 100 percent bio-derived next-generation biodiesel called Susteo developed by Japanese firm Euglena Co.Ltd.

The Super Taikyu Series features seven rounds, starting at Suzuka on the 19th March. The flagship event is the 24 Hours of Fuji in June, with the remaining races being of five or six hour duration. Across it’s multi-class structure there are classes for GT3, GT4 and TCR bespoke race cars, plus five classes for production based cars.

By participating in the race series with a Demio/Mazda2 that runs on next-generation biodiesel fuel, Mazda is demonstrating its continued support for the use of next-generation biodiesel as an option to achieve carbon neutrality. Mazda demonstrated the potential of the 1.5-litre Skyactiv-D powered car, and Euglena’s 100% bio-based fuel made from used cooking oil and microalgae fats, when the Mazda2/Demio competed in last November’s Super Taikyu Race in Okayama.

This year the biodiesel powered Mazda2 will take part in the full series, while from the third round of the series, Mazda will also compete with a Skyactiv-G petrol powered Mazda MX-5 in the ST-5 production class, while privateer teams will also enter MX-5s in the this class.

Mazda is following a comprehensive strategy called the multi-solution approach, which takes into account all available solutions to reach climate neutrality and to suit individual mobility needs as well as regional conditions. Mazda intends to expand its powertrain lineup by investing in conventional hybrids, diesel engine models, pure EV models and plug-in hybrid models, while at the same time promoting initiatives in renewable fuels such as 100% bio-based fuels.

Next-generation biodiesel fuels, which are made from sustainable raw materials such as microalgae fats and used cooking oil, do not compete with food crops, which has been an issue with existing biodiesel fuels. As these fuels can also be used as alternatives to diesel fuel in existing vehicles and equipment without any modification, no additional fuel supply infrastructure is required. Therefore, biodiesel fuels can be expected to play a prominent role as an excellent liquid fuel source in promoting carbon neutrality.

Mazda is a member of the Hiroshima “Your Green Fuel” Project, an initiative running in Hiroshima for popularizing and spreading the use of next-generation biofuels jointly run by the Hiroshima Council for Automotive Industry-Academia-Government Collaboration (Hirojiren)1 and Euglena Co., Ltd.2. The project aims to establish a model for revitalizing regional areas by retaining the entire value chain of carbon neutral fuels from the manufacture and supply of raw materials through to fuel use within the Hiroshima area.

1     Hirojiroen coordinates the overall demonstration project, promotes use of local resources as raw materials, promotes renewable energy-related projects in the region, and supplies fuels to companies and organizations that use biodiesel fuel for official vehicles and company cars. Biodiesel fuel is used in some public and company vehicles.

2     A bio-venture company that develops and sells foods and cosmetics that utilize microalgae Euglena, etc., researches biofuel production, and provides gene analysis services. It collaborates with Mazda through Hiroshima “Your Green Fuel” Project and will supply fuels to support Mazda’s participation in the upcoming Super Taikyu Race.