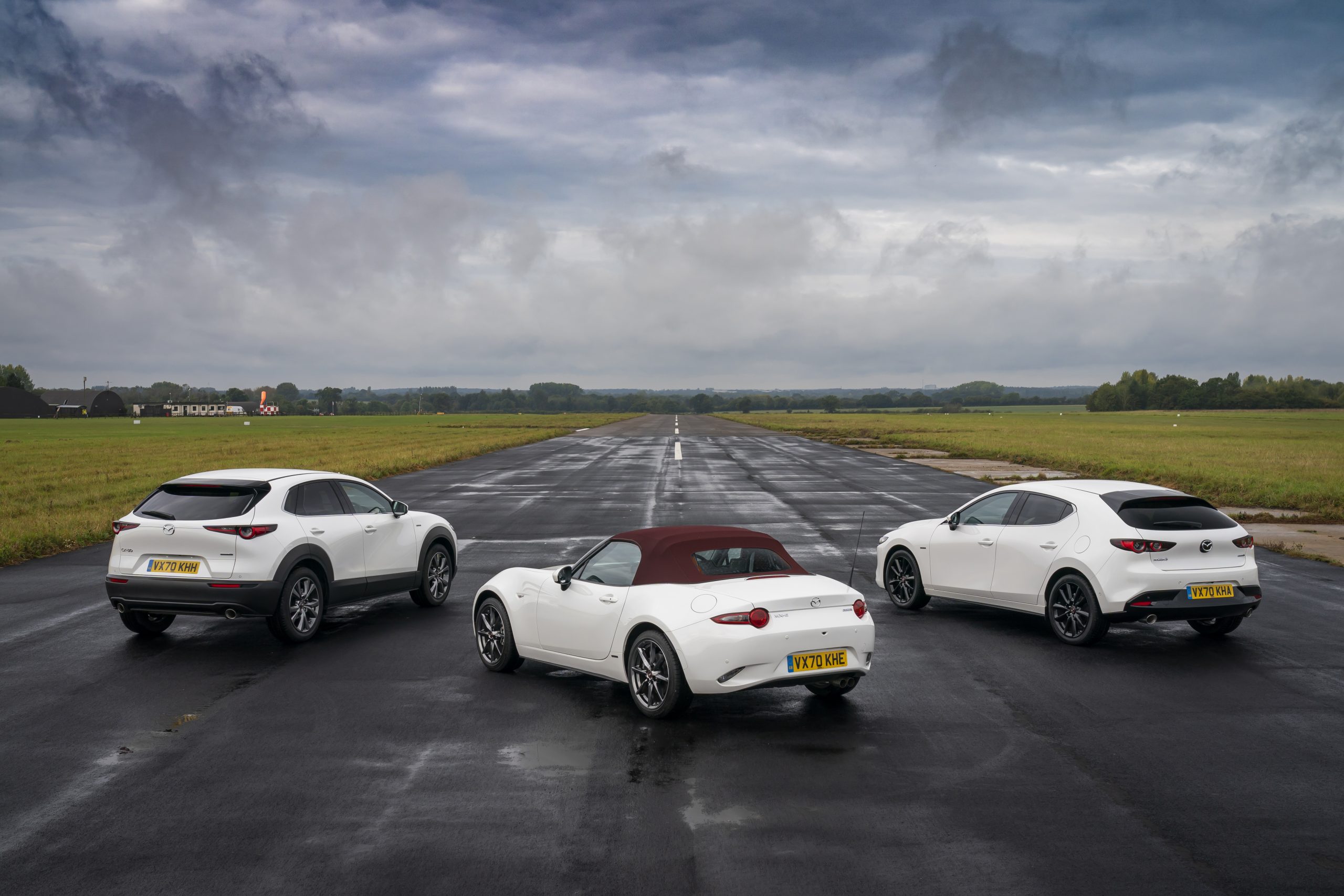 Built to celebrate Mazda’s centenary, the 100th Anniversary Special Edition series is a range of special versions of all the key passenger cars in the firm’s global line-up and they’ve now arrived in the UK. Designed to celebrate the company’s centenary, the 100th Anniversary models adopt a white-and-burgundy two-tone exterior/interior combination, inspired by high-grade versions of Mazda’s first passenger car: the Mazda R360 Coupe.

Revealed in Japan earlier this year, the first 100th Anniversary Special Edition models have now arrived in UK dealerships. The £30,000 Mazda3 is powered by the 180ps Skyactiv-X engine and with just 100 examples of this car being sold in the UK it becomes the unique halo for the award-winning Mazda3 range. Likewise, the £31,700 100th Anniversary Mazda CX-30 shares the same Spark Controlled Compression Ignition SPCCI Skyactiv-X engine and the rarity of just 100 cars being sold in the UK.

Each vehicle will arrive with a bespoke key presentation box to be used on vehicle handover. Following delivery, the customer will also receive a beautifully crafted, limited edition book documenting the 100th anniversary of Mazda, as well as a 1:43 model of the Mazda R360 that inspired this range of special edition models.

Destined to be some of the most exclusive Mazdas on UK roads, all of these cars wear the unique 100th Anniversary badge inside and out, this special 100th Anniversary symbol overlays the current Mazda badge atop the original round logo of the Toyo Kogyo company. The design of which reflected the desire of Mazda founder Jujiro Matsuda to contribute to the world through engineering and the determination to constantly strive forwards.

Launched in 1960, the Mazda R360 was the firm’s first production car, this stylish coupe micro-car proved to be a huge sales success, and the white body/red roof two-tone design of high-grade versions has 60 years later inspired the exterior-interior colour combination of Mazda’s 100th Anniversary models. With just 100 examples of each coming to the UK, the Mazda MX-5 Convertible, Mazda CX-30 and Mazda3 100th Anniversary Special Edition’s will offer a desirable blend of stand-out design and exclusivity for UK Mazda fans.

Commenting on the 100th Anniversary Special Editions, Mazda UK Managing Director, Jeremy Thomson, said: “ Mazda Corporation has created these special models as a token of appreciation for the customers who have supported Mazda through the years. We are proud to now have special versions of the MX-5 Convertible, CX-30 and Mazda3 in our UK showrooms. UK buyers have always loved special edition MX-5s so I’m sure that with its distinctive cherry roof and burgundy interior, the 100th Anniversary Special Edition Convertible will be very popular, while the first opportunity to have distinctive limited-edition versions of our latest cars: the Mazda3 and Mazda CX-30 is equally exciting”.

Adding, “Mazda’s have been sold in the UK for over 50 years and today, just as in the past, UK owners love the style, quality and driver involvement of our cars. Since the inception of Mazda UK in 2001 we’ve sold more than 795,000 cars in the UK, so it’s great to be able to celebrate the centenary of Mazda Corporation by offering these special models, at the same time as looking forward to our exciting future, including the launch early in 2021 of our first electric vehicle: the Mazda MX-30.