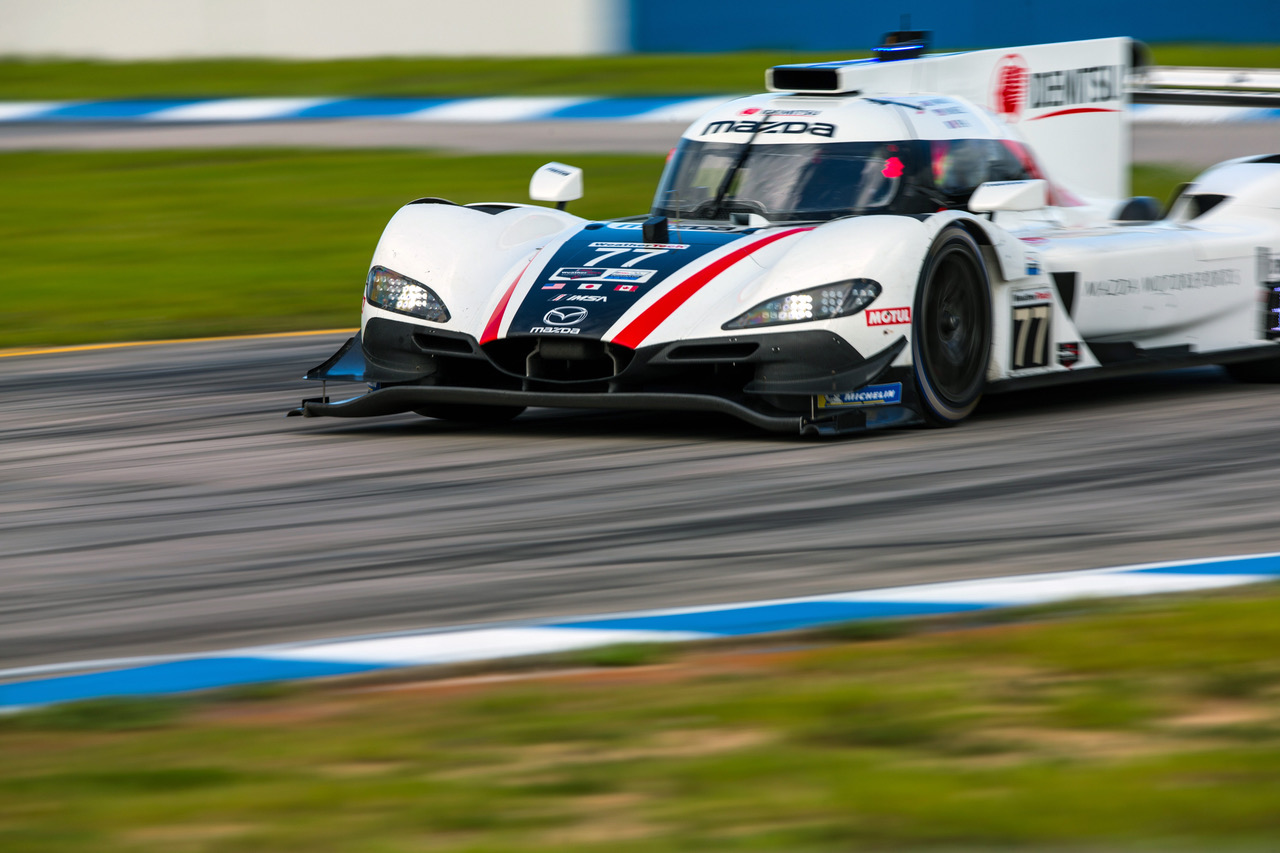 Mazda Motorsports’ pair of Mazda RT24-Ps came home fourth and fifth after two hours and 40 minutes of fast and furious racing at Sebring International Raceway on Saturday July 18th. The best placed Multimatic run car was the number 77 of Oliver Jarvis and Tristan Nunez, who only lost a hard fought podium spot at the end of the final lap due to running short on fuel.

The number 55 Mazda of Harry Tincknell and Jonathan Bomarito hung on to fifth, despite coasting across the line due to the same problem as its sister car.

The race was billed as the “Cadillac Grand Prix of Sebring”; an appropriate title as the top three spots went to Cadillacs that had great pace, but more importantly, two laps more fuel capacity than the Mazdas.

The Mazdas qualified in fourth and eighth and it was Nunez who started from the second row in the number 77, with Bomarito on row four in the number 55. Both took the start at maximum attack, handily gaining positions in the early laps. Both cars pitted under yellow flags after 30 minutes of racing and resumed their attack, which resulted in some great racing with the Penske Acuras.

Just before the halfway mark, at the second pit stops, it became evident that both the Mazdas and Acuras were going to be disadvantaged to the Cadillacs on fuel strategy.  The race pace and length predicted that that the Mazda RT24-Ps would come-up a lap shy on fuel at the end while the Cadillacs would have two laps in hand.  As Jarvis took control of the number 77 and Tincknell the number 55 they were given fuel consumption numbers to target on their dash displays so as to make the end without requiring an extra stop.  This ultimately limited their ability to attack the Cadillacs although a similar situation at Penske made the Acuras Mazda’s primary target.  As Jarvis rejoined in third, Tincknell found himself in fifth, behind the Penske #6 of Dane Cameron, as he explains: “I had some really good battles during the race but the best one was with Dane Cameron. I managed to pass him going into Turn 1; it was really tight and quite aggressive from both of us but it was fair and clean, which is what it’s all about. That took me up to fourth place and I was able to catch Olly (Jarvis) and we ran third and fourth for a long time trying to maximize our fuel economy by drafting down the straights and rolling through the corners.”

The final pit stop was two minutes outside of the finishing window and so an even more aggressive set of limitations were imposed to reach the end, the pressure of the Acuras now gone as Penske accepted the deficit and pitted a fourth time with half an hour to go.  Jarvis and Tincknell balanced keeping ahead of a hard charging Sebastian Bourdais in the number 5 Cadillac against finishing the race but came up short allowing the Frenchman to take the final podium spot but just keeping the Accura cars at bay.

Tincknell said: “We had to aggressively save fuel in the later stages of the race so we couldn’t push hard. It was so tight, in retrospect too tight, and it was looking like I wouldn’t be able to complete the last lap. I knew I was going to lose fourth to Bourdais but if I boxed I would lose another place to Cameron so I coaxed it around the last lap, wringing every last drop of fuel out of the car. I ran out of fuel going into the last corner, put the clutch in and rolled over the line 1.5 seconds ahead of the Accura.”

While the Mazdas may couldn’t fight the Cadillacs at Sebring, they were the next best points scorers so it was a good exercise in damage limitation for the championship fight.

Multimatic’s Vice President, Larry Holt said: “Talk about drama, we had the drivers and cars to compete for the podium but our IMSA-dictated fuel capacity and race length combined to limit our ability to go full attack.  Harry and Oliver were massively frustrated in the last stint as it became a speed vs. consumption game and so there was no hope of having a go at the Cadillacs.  Luckily Penske was worse off and so we were able to keep them at bay.  We knew that the cars were probably not going to make the end a couple with five minutes left and I told the boys to get ready for a splash but Harry convinced me that he could get it to the end and he and Oliver did just that…but only just.  We limited the damage and came away with a good points haul.”

Jarvis and Nunez are now tied for the championship lead, with Tincknell and Bomarito in fourth.