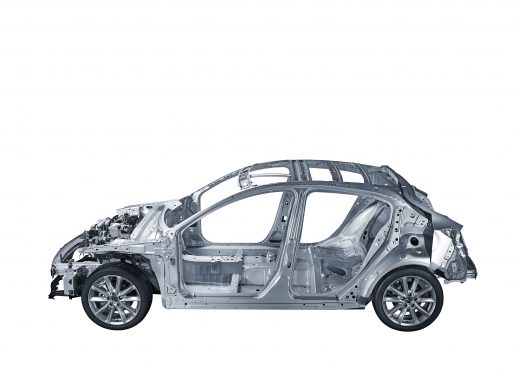 With our revolutionary SKYACTIV technologies, redesigned from scratch to provide breakthrough performance, Mazda has consistently aimed to provide the joy of Jinba Ittai driving. With Jinba Ittai, the car responds almost as though it were an extension of the driver’s body, enhancing safety and peace of mind. In our effort to create such cars, we have focused on a human-centred development process.

Now we have developed our next-generation SKYACTIV-Vehicle Architecture in which the basic functions of our SKYACTIV technology series have been fine-tuned to ensure that occupants can leverage their natural ability to maintain their balance while the car is moving. More than on individual components systems such as the seats, the body, the chassis, the tires and so on, in development we have focused on vehicle-total coordination, reallocating functions and creating an architecture that works together as a coordinated whole.

Making full use of inherent human abilities has allowed us to go beyond the traditional concept of a platform for more intimate communication between car and driver. Mazda has taken the joy of driving to the next stage, for the ultimate in Jinba Ittai driving in which the driver is barely aware of the car itself.

Aims and concepts of the technology

When a person walks, the body creates an axis of forward movement that serves as a baseline for maintaining balance, making use of the flexibility of the spinal column. Mazda calls this line the “progression axis.” It forms a starting point for maintaining a state of dynamic balance in which the pelvis and upper body move in opposite directions, with muscular exertion and small adjustments of the posture being used to control the body’s centre of gravity and suppress the motion of the head.

This means that when the walker changes direction or encounters a change in level, the body can continue moving smoothly and continuously in the intended direction without the progression axis being thrown off-course. However, people are not conscious of this. This balance ability, an inherent advanced human ability, is a skill people use unconsciously.

To use this balance ability, the body needs to maintain a posture in which the pelvis is upright and the spine forms an “S,” while the reaction force from the ground is transferred to the pelvis via the lower legs, allowing the pelvis to move smoothly in a systematic and continuous pattern. This pattern of movement in a person who is walking represents the ideal state of motion, allowing the walker to move in comfort and with minimal fatigue, while being ready to respond instantly to any sudden disturbances in his or her environment. 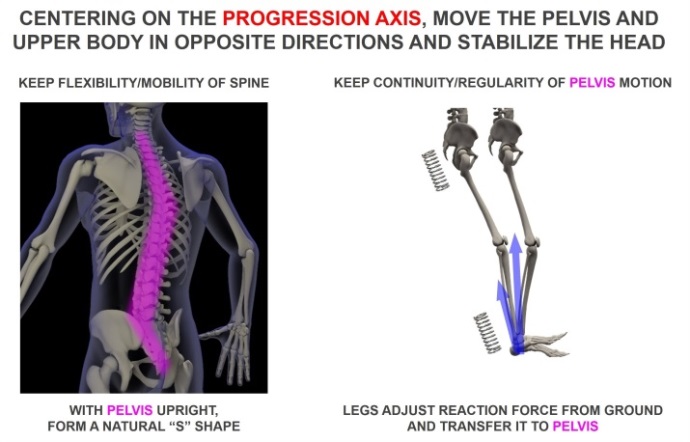 The ideal state for vehicle occupants

Mazda has conducted research into this ideal state of motion, with the aim of designing vehicles which allow occupants to use their natural and instinctive balance ability in the same way they do when walking.

In other words, the seats in such a car allow occupants to sit with the pelvis supporting the spinal column in an S-shape, while the reaction force from the ground is smoothly transferred through the car body rather than through the person’s legs for smooth, continuous movement of the pelvis. In addition to optimizing each component and function, SKYACTIV-Vehicle Architecture has enhanced the connectedness of functions in various areas including the seats, body, chassis and tires to create a vehicle in which everyone can make use of their natural balance ability at all times for a comfortable, relaxing drive in which the head is stable and occupants can respond immediately to changes in the driving environment.

Key points to ensure occupants can use their balance ability

To develop sprung mass capable of this kind of smooth, continuous movement, Mazda has focused on the following three points.

2) Align the direction of forces

Seats: Moving together with the sprung mass

In SKYACTIV-Vehicle Architecture, the latest insights obtained from research into human biology have been incorporated into the design of the seats, ensuring that occupants are able to make full use of their balance ability when in the car by ensuring that the occupant’s pelvis is supported so as to maintain the spine’s S-shaped curve.

Specifically, the technology supports the upper pelvis to ensure that the entire pelvis is positioned correctly. Meanwhile, the shape and firmness of the seat envelop the gravity centre of the rib cage (corresponding to the upper section of the S-shaped curve of the spine), helping to keep the spinal column in this position. In addition, the shape and rigidity of the cushioning provide good support for the thigh bones, creating a structure which allows the user to adjust the angle of the thighs independently, to ensure that the seat can take on and adapt to individual differences in physique.

Next, we have increased the rigidity of individual components of the seats and of the attachment points that transfer forces from the vehicle body. This eliminates any lag between the movements of the sprung mass and those of the seats, ensuring that input energy is transferred smoothly to the occupant’s pelvis. Finally, we have also made the seats’ internal structure more rigid to ensure that the load is transmitted more directly from the sprung mass to the occupant’s body. 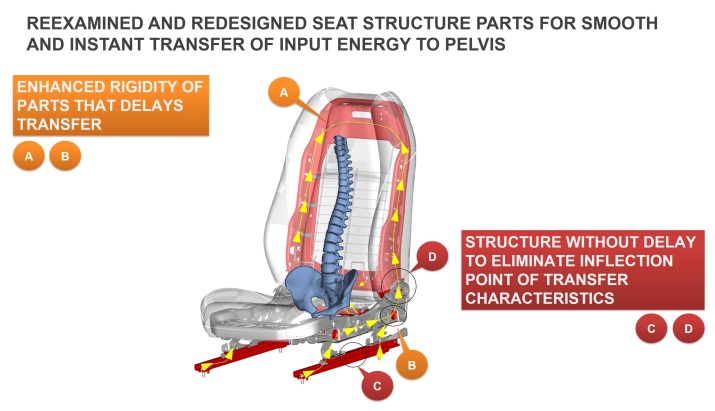 These changes minimize the movement of the seat relative to the sprung mass; the seat moves together with the sprung mass with no delay and forces are transmitted to the pelvis smoothly.

Keeping in mind the ideal path for transmitting input energy from the ground to the body, we have taken the basic SKYACTIV-Body model—based on the concept of a “straight and continuous” framework—and fine-tuned it still further. To the ring structures that connect the framework vertically and laterally in the previous body, Mazda has now added front-to-back connections, creating multi-directional ring structures that improve diagonal rigidity. The front cowl side panel, front damper and rear damper attachments and rear door opening have been positioned for maximum effectiveness, based on analysis of the energy path.

As a result of this new multi-directional ring structure, the delay in the transmission of input energy to the diagonals stretching from the front to the rear has been reduced by 30 percent compared to the current body, with forces now transmitted between all four diagonal corners almost instantly.

Chassis: Smoothing out input forces from the unsprung mass

Input energy from the ground is communicated to the body via the suspension. Traditionally, vehicle architecture has been designed to reduce the magnitude of forces conveyed to the sprung mass. With SKYACTIV-Vehicle Architecture, however, Mazda has added a new concept—smoothing out the forces conveyed to the unsprung mass over the time axis—and has completely redesigned the allocation of functions among the various components based on this. 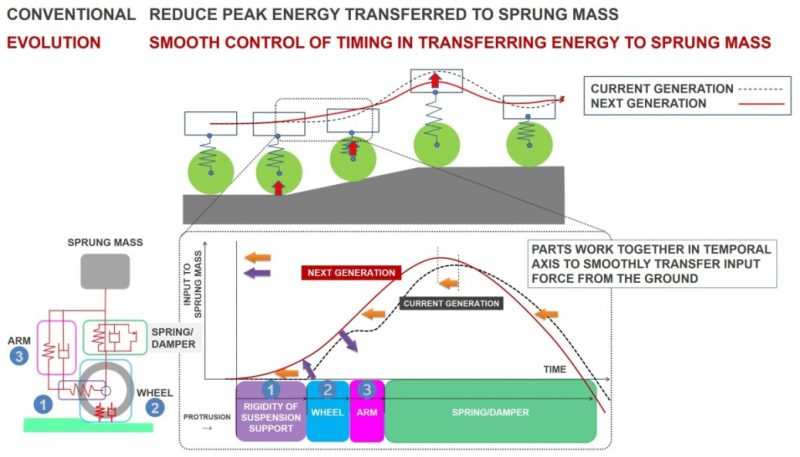 While the suspension operates in a vertical direction, the suspension arm angle faces downward (in an inverted V shape) at all times, so that the inertial force of the sprung mass pushes the tires down toward the ground. Meanwhile, the use of a spherical bush

ensures that the transmission of energy is perfectly aligned with no slippage, making it easier for the attachment of the suspension arm and link to rotate smoothly.

A more efficient functional arrangement has also been adopted for the tyres. In a stark departure from our previous approach, which focused on increasing the vertical stiffness of the tyres, we have softened the side walls and reduced stiffness. Doing so has allowed us to plan for the adoption of Mazda’s unique vehicle dynamics control technology, G-Vectoring Control,* right from the initial conceptual stage of platform development, resulting in a more effective functional allocation.

As a result, the rubber of the tyres is able to exert its vibration absorption and damping effects to the maximum extent. Meanwhile, vehicle load transfer is utilized proactively during steering, meaning that tire force can be exerted without any time lag.

* G-Vectoring Control adjusts engine torque in response to steering input in order to control lateral and longitudinal acceleration (G) forces (controlled separately in traditional vehicle architecture), in a unified way and optimize the vertical loading of each tire to realize smooth and efficient vehicle behaviour. 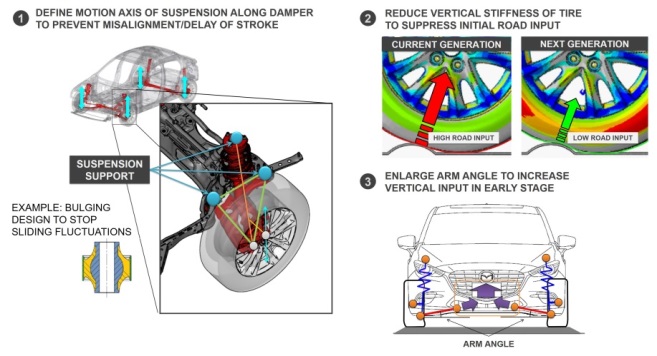 Creating a quiet interior space is another important factor in ensuring that people can make maximum use of their natural abilities. SKYACTIV-Vehicle Architecture represents a major step forward in NVH performance.

Through research into the human hearing mechanism, we discovered that people experience more discomfort when sounds and vibrations increase suddenly or to a marked extent, and we focused on this in addition to the overall volume under normal conditions. We worked to ensure that noise and vibration from various sources changed more linearly over the time axis, with the aim of creating superior perceived quietness for occupants. 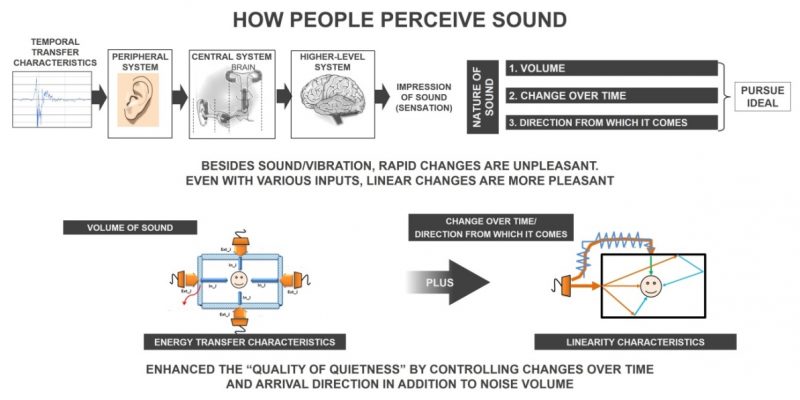 Damping characteristics for vibration energy are important in terms of controlling both the timing at which noise enters and the direction from which it arrives. To ensure effective control over vibration energy entering the body, Mazda has used a new high-efficiency damping structure that includes damping nodes and damping bonds, depending on the characteristics of the points where energy tends to concentrate. 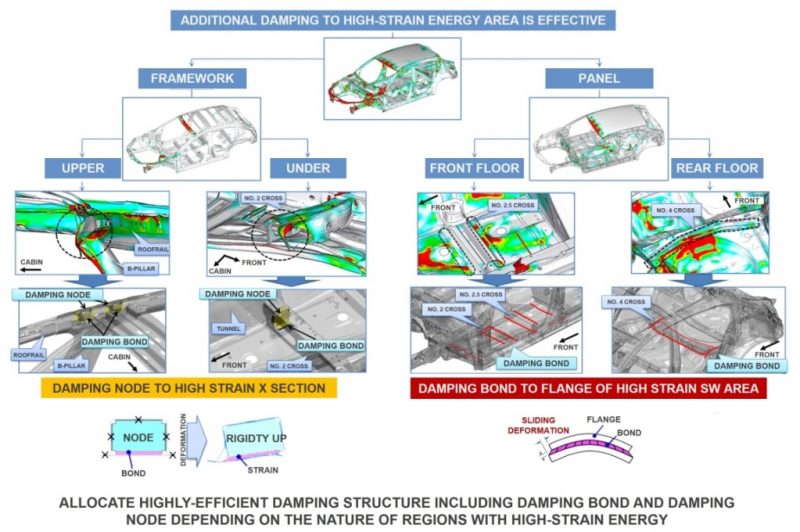 With traditional vehicle architecture, a sudden change in the road surface (from smooth to rough, for example) creates a change in noise levels over and above the actual change in vibration energy conveyed from the road. With Mazda’s new vehicle architecture, by contrast, a change like this is experienced by occupants as a more gradual and linear shift commensurate with the actual degree of change in the surface. The ultimate result is a quieter and more comfortable ride. 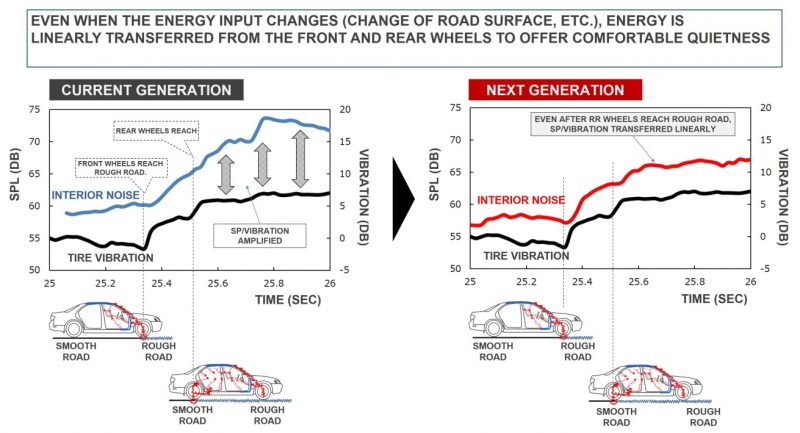 At Mazda, we believe that cars can bring joy to our lives.

The Jinba Ittai driving feel invigorates the minds and bodies of drivers and passengers alike and draws out the natural abilities, giving rise to the “joy of driving” that is our ultimate goal.

Mazda hopes to protect our beautiful planet while enriching people’s lives and society as a whole through cars that offer this unique form of driving pleasure.