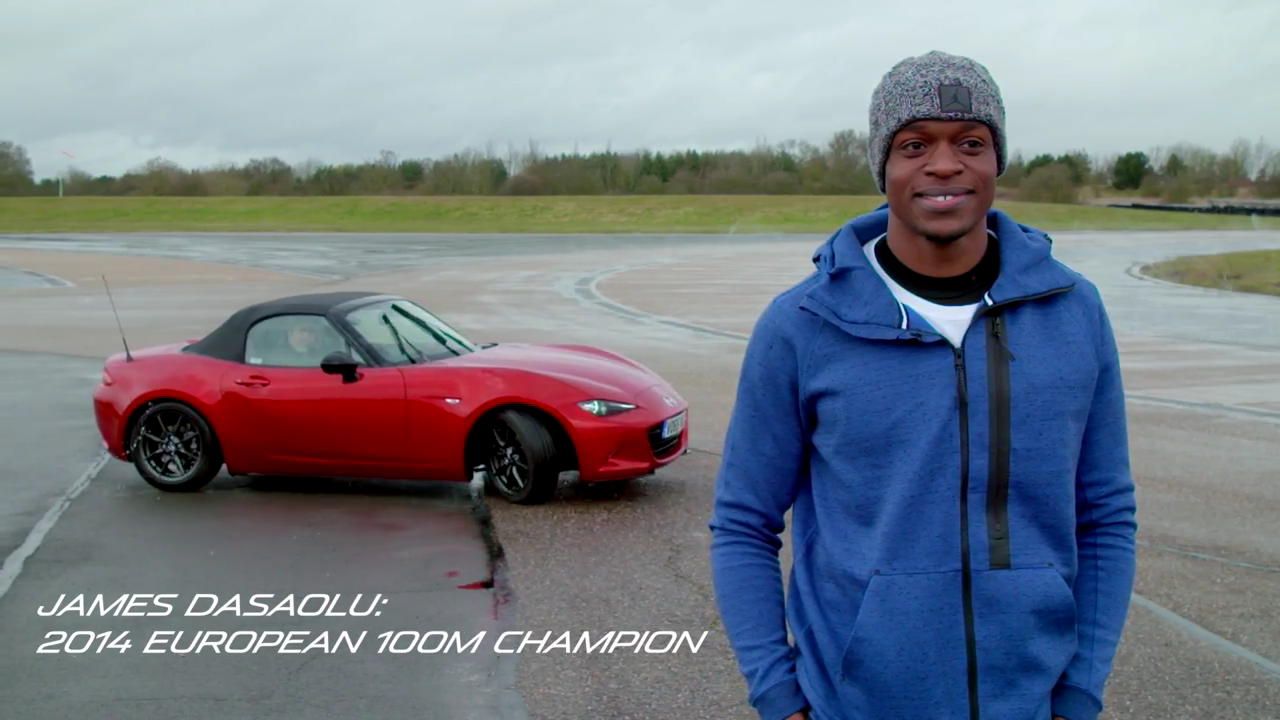 As reigning European 100m sprint champion, James Dasaolu is used to going quickly in a straight line. He’s not quite so used to going sideways, in a circle, using a car to power him to the finish line. So we put James, 28, in a an all-new Mazda MX-5 and set him a challenge with a difference: master the art of drifting a sports car.

Never one to shy away from a challenge, James accepted and soon found himself spending a morning with driver trainer extraordinaire Mark Hales.

The art of drifting is where the driver uses the accelerator, steering, gears, brake and clutch to keep the car in a permanent sideways slide. “It’s very difficult to do, particularly in the MX-5,” explained racing driver and coach Hales. “The Mazda has so much grip compared to its power that to drift without destroying the tyres, we need a wet surface.” 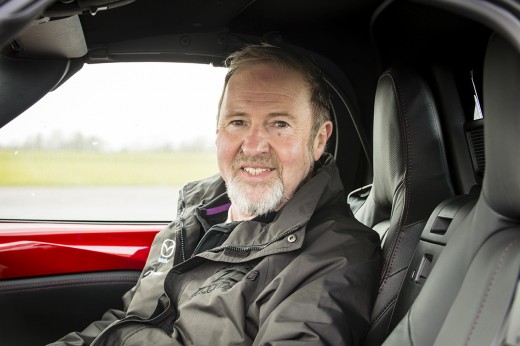 To guarantee the right conditions, we took James, Mark and an all-new MX-5 to the famous MIRA test track near Hinckley, Notts. The circular Wet Handling Circuit has three surfaces: regular tarmac; Bridport Pebble to simulate snow; and Basalt tiles which are as treacherous as ice when soaked. And soaked it was, being continuously sprayed from a 227,000-litre tank of water that was fed by its own reservoir.

James is a newcomer to drifting. “I play a lot of computer games,” he admitted. “But I’ve never tried it in a real car so I’m going to have to try to marry what I’ve learnt on Forza and Need for Speed with what’s happening in reality.”

To begin with, Mark could tell that James seemed fearless. “James was giving the car big bootfulls of gas to get the back end to come round and initiate the slide. But he was giving it too much and sending the car into a spin,” Mark revealed. “That said, world-class athletes are nothing if not competitive. They’ll try and try and try again to nail something.” He was right.

Although James was spinning on a regular basis, he quickly got the hang of how to drift. And with the MX-5’s nimble reactions and communicative steering it wasn’t long before it wasn’t a case of whether he could drift, it was a case of how long he could hold the slide and drift around the circular skid pad for.

“I feel like a more complete driver now. Forza just won’t feel the same without being able to feel the car sliding through my backside!”

And then he cracked it. “It was really a case of building my confidence,” James said. The tarmac was incredibly slippery so I had to take into account whether I was on the super slippery stuff or just the slippery. I went for the latter in the end. It was an incredibly satisfying experience to hold the slide and it really put a smile on my face. The MX-5 is so easy to drive and so easy to have a lot of fun in. And I feel like a more complete driver now. Forza just won’t feel the same without being able to feel the car sliding through my backside!” 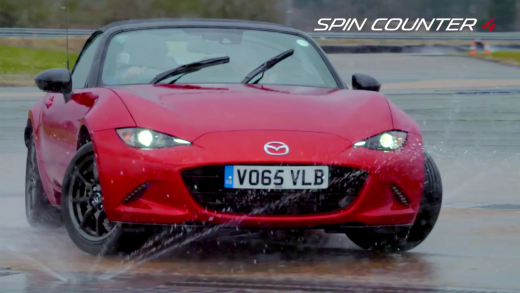 Mark added: “James was an excellent pupil. But I think the most important thing was that he discovered he could have a huge amount of fun at a very low speed. It’s something we often forget nowadays. But learning a new skill in a responsive roadster like the MX-5 can put the thrill back into driving.”