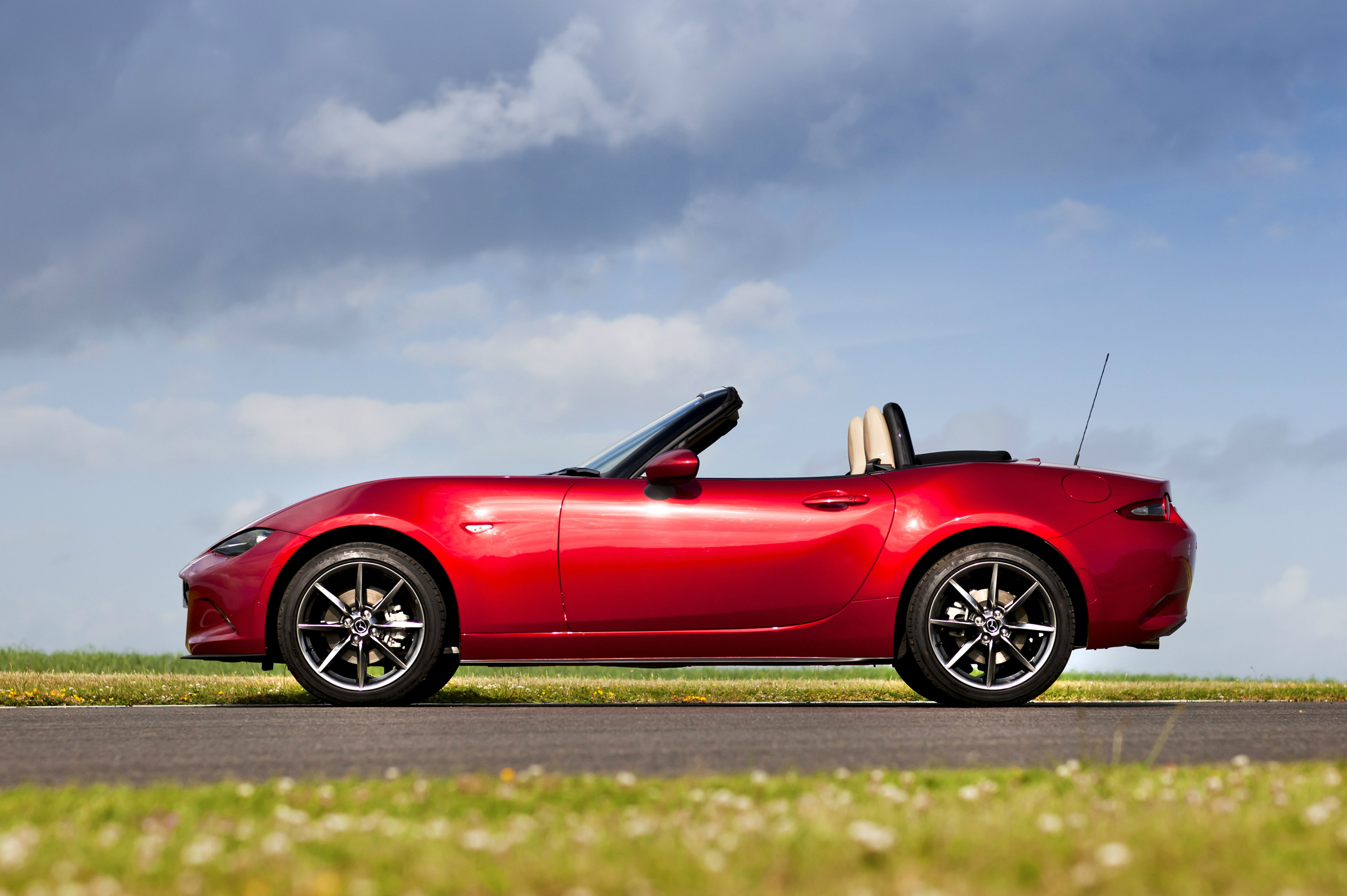 The reviews have been coming thick and fast for the all-new Mazda MX-5, the world’s most popular two-seater roadster. The press love it and the public do too; over 800 were sold during September alone, proving that British drivers won’t let inclement weather dampen their enthusiasm for this affordable, fun sports car.

Here we round up a selection of the latest reviews from the critics. It’s fair to say you may see a pattern emerging: the all-new Mazda MX-5 appears to be a hit!

Stuff, the popular tech title, wonders what everyone did back when the first MX-5 went on sale in 1990. Leon Poultney observes: “The Mazda MX-5 has been around for 25 years now. 25 years. Back then there was no iPhone, no PlayStation and Windows had only made it to 2.0.” Perhaps drivers were simply busy having fun in their two-seater roadster. 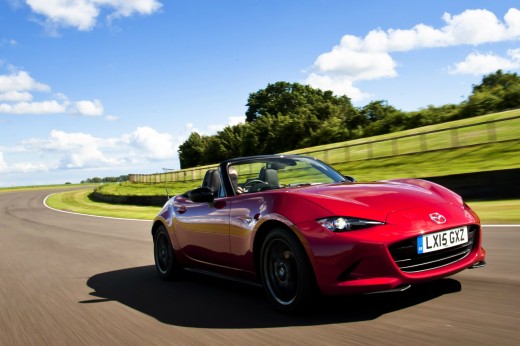 Rob Gill, The Sun’s motoring correspondent, says: “Despite our soggy summers, Brits have always had a soft spot for soft tops — and the Mazda MX-5 in particular.” Over 120,000 MX-5s have been bought by drivers in the UK, half of all European sales and one in 10 globally.

Writing in the Guardian, Martin Love thinks that the popularity of the MX-5 reflects well on British drivers. “I like what it says about our national psyche that we have so taken this little two-seater to our hearts.” As Love observes, there’s no shortage of cars that are posher and more powerful. “But when it comes to likeable, affordable, roof-down thrills, nothing comes close.”

Attention to detail: innovation as standard

Autocar is interested in what Mazda engineers refer to as a ‘gram strategy’ – reducing the weight of every component. “Thus the all-new suspension… is 12kg lighter thanks to its aluminium components. The engine frame is aluminium, as are the front wings and bumper reinforcements. The result is a claimed 100kg reduction in kerb weight compared with the previous MX-5.” Matt Prior says: “That presents the prospect of this car being a true sub-one-tonne rear-drive open-top without being as stripped out as a Caterham or as overtly Spartan as a Lotus.”

Car Buyer’s test team agrees, saying that the all-new Mazda MX-5 has few direct rivals: “The similarly fun-to-drive Lotus Elise is a lot more expensive to buy, while more conventional convertibles such as the Volkswagen Golf Cabriolet and Audi A3 Cabriolet aren’t as entertaining.” 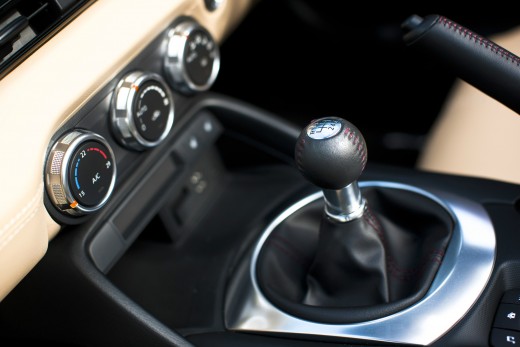 Also finding it hard to fault the 2015 all-new Mazda MX-5, Auto Express’ reviewers praised its gearchange. They said: “It’s about as good a six-speed manual as you can get.”

There’s further acclaim for the ‘supple suspension’ which enhances comfort when taking things easy. Admittedly, claim the testers, this gives a little body roll. But they say: “It only adds to the interactivity when you’re moving fast.” They add: “Switch the traction control off and you can break the rear tyres’ grip on the road, but the car always lets you know how close to the limit you are.”

What happens when one of the most experienced reviewers of performance cars pitches the latest Mazda MX-5 against the acclaimed GT86 sports coupe from Toyota? It beats it. That was the view of Steve Sutcliffe, who pitched the two cars against the stopwatch on the race track.

Comfort and quality: inside the cabin 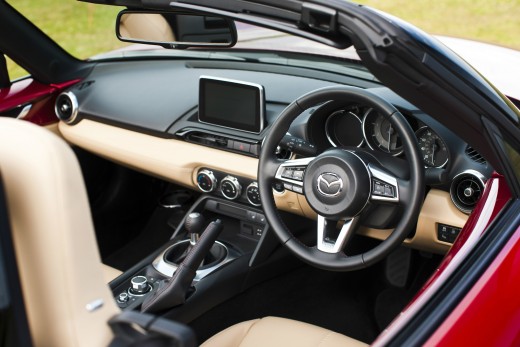 “The cabin is just great,” says Top Gear, praising the quality and ergonomics. “Things are so easy to operate. The seats are comfy, the boot is surprisingly deep, the headlights are strong, the sat nav (if you option it) is intuitive and there’s more space in the cockpit than you expect,” says the review. Why not try one for size yourself by having your local dealer arrange a test drive? 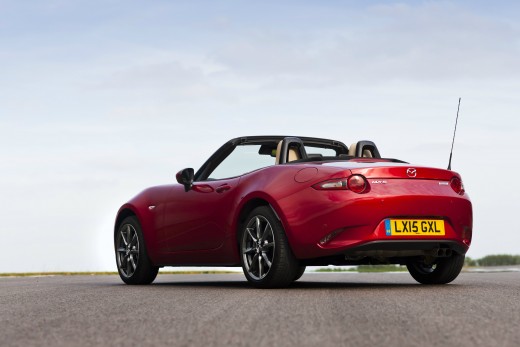 When it comes to posing, drivers will find a lot to like about the MX-5, says James Mills of The Sunday Times. “The roof doesn’t have heavy, complex electronics; simply unfasten a catch and shove it back, exposing yourself to the elements in all of two seconds.” Mills adds: “Putting it up again is more of a hardship — it takes at least, ooh, three seconds to close.”

The roof also impresses the testers at What Car?, who describe the noise levels with it closed as ‘perfectly acceptable’ and reckon that ‘wind rush’ is successfully diverted around the driver and passenger once the hood’s lowered.

What Car? believes that the omens are good for the reliability of the new MX-5. It notes: “The outgoing model scored well in the latest JD Power customer satisfaction survey in terms of reliability, and Mazda as a brand also did well.” Car Buyer reinforces this, after the previous version of the roadster ‘was rated 10th out of 150 cars for reliability’ in the 2014 edition of Driver Power. 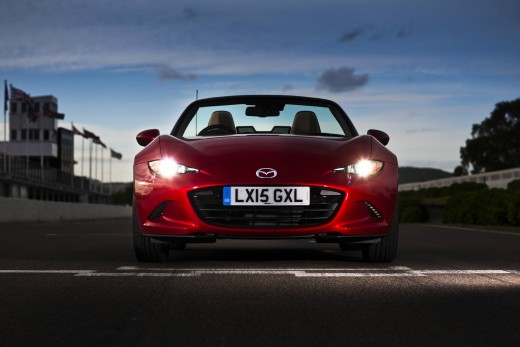 The Telegraph gets to the point when reviewing the fourth generation MX-5, declaring it: “Pound for pound, one of the most enjoyable cars around.”

With ‘extremely competitive’ prices and generous levels of equipment, plus the ‘light weight and relatively efficient engines make it cheap to run,’ What Car? also declares the Mazda MX-5 to be good value for money.

Autocar agrees: “Anyone choosing a new MX-5 would enjoy a far better driver’s car than you’d believe £20,000 could secure.”

Top Gear reckons that the new MX-5 is ‘an absolute peach.’ It adds that it ‘dances along difficult roads’ and proves that there’s ‘a joy in simple things.’

Summing up, Top Gear delivers a no-nonsense verdict on Mazda’s latest sports car: “The world deserves a small roadster as good as this.”

When was it originally launched? Chicago Auto Show, February 1989

What generation is the latest model? Fourth generation

Where is it built? Ujina Plant No.1 in Hiroshima, Japan