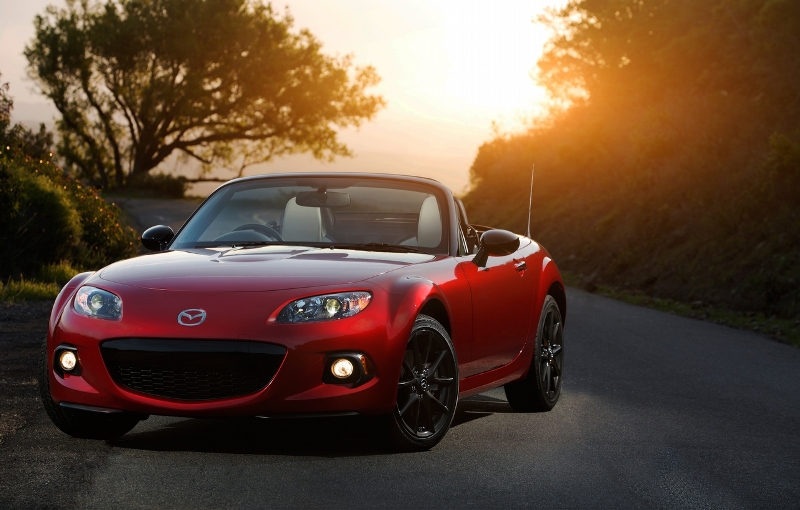 Celebrating the 25th birthday of its iconic two-seat sportscar this year, Mazda is delighted to announce the launch of the MX-5 Roadster Coupe 2.0-litre 25th Anniversary Limited Edition, which goes on sale throughout the UK from 1 August.

First revealed to the public on February 9th at the 1989 Chicago Auto Show, the Mazda MX-5 caused a sensation. Reintroducing a category of vehicle that had become all but extinct by the early 70s, it was an instant hit on a global scale, far outstripping the company’s own sales predictions.

When global production reached 531,890 units in May 2000, the little Mazda was certified by Guinness World Records as the world’s best-selling two-seater sports car in history. Total global production passed the 900,000 mark in February 2011, and the Mazda MX-5’s Guinness certification was updated.

Just 1000 individually numbered examples of the Mazda MX-5 Roadster Coupe 2.0-litre 25th Anniversary Limited Edition will be built. It is a testament to Britain’s enduring love affair with open-topped motoring that 750 of them will be made available to UK customers with number one being unveiled at this year’s Goodwood Festival of Speed on 26-29th June.

“To date, three generations of Mazda MX-5 have witnessed the release of over 43 Special Edition models in the UK since 1990,” said Jeremy Thomson, Managing Director, Mazda UK. “None, however, could be more significant to us than this 25th Anniversary Limited Edition, which marks such an important milestone for a car that single-handedly reintroduced the world to the pleasures of exhilarating and affordable open-topped motoring.”

With a comprehensive equipment specification based on the Mazda MX-5 Roadster Coupe 2.0 litre Sport Tech Nav, the 25th Anniversary Limited Edition boasts a wealth of additional exterior and interior features unavailable on any other Mazda MX-5.